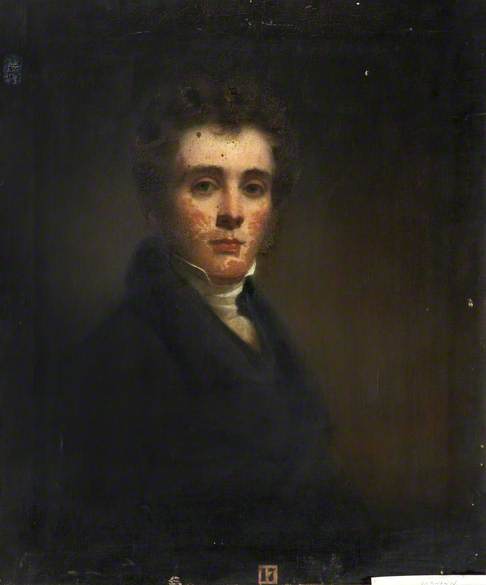 The forthright gaze of the sitter may indicate that this is a self portrait, possibly by an early member of the Royal Scottish Academy. The style of jacket and shirt suggests the portrait to date to the 1820s or 1830s and the sitter looks to be aged in his twenties or thirties.

The work has no clues as to who the artist/sitter is/are. The printed paper label 17 adhered to the front centre bottom of the canvas appears to be from a 19th century attempt at cataloguing, but the associated list to which it cross-referenced has not been identified.

The deformities around the face suggest an issue with the materials used - Scottish artists of this period had a tendency to over-employ bitumen with their oil paint to create richer shadows. That is unlikely to be the case here, but clearly something else appears to have been mixed with the flesh tones of the face which has not reacted well over time.

Any assistance in helping narrow down the identity of the sitter, and of the artist would be appreciated.

It would be helpful to see a photo of the reverse. It'd also be helpful to know if other pictures in the RSA's collection have similar labels with numbers stuck to the surface of the painting like the '17' in this case.

This is a standard British canvas size of 30 x 25 ins. Could this be the work of a student or exhibitor at the RSA?

Jacob, the Collection have been asked if that could be provided and your questions have been put to them. Regards, David

The canvas is recorded as 76.2 x 63.3cm and the only "inscription" is the printed label pasted to the front of the canvas.

We hope to be able to get a photograph of the back of the canvas taken later this week and will post that as soon as possible.

The label is not unique, but we have been unable to marry any of the numbers to the "obvious" cataloguing - viz the printed "Art Property in the Collection of the Royal Scottish Academy" (compiled by John Hutchison RSA, pub 1883) nor in any of the printed catalogues of the National Gallery of Scotland, in whose rooms many works from the RSA Collection were on public show during the joint occupancy of the (current) NGS building on the mound by the RSA and NGS from 1855[RSA]/1859[NGS] to 1911.

The fact that it has been applied directly to the canvas suggests that it is an audit number rather than, for example, an exhibition label. We just can't match it to any extant internal numbering sequence.

It may well be that this portrait could be from 1810-20... the carefully disheveled hair, the high collar, the white cravat and roll-collar jacket could be from those dates.

Thank you for this Lou - allowing for the fact that fashion trends would take longer to catch on the further out of London one goes, coupled with the fact that the dress shown may not be "straight off the catwalk" (younger, less affluent sitter - potentially) would it still be your opinion that it is more likely to be c.1810-20 than the c.1820s-30s date which we currently assign to it?

I am also sending on images just taken by RSA Collections Curator, Sandy Wood (thanks Sandy) showing the overall verso of the work, and a detail of the canvas stamp which is faintly discernible at bottom right, as requested last week by Jacob Simon, whose experience and knowledge of these stamps we hope will come up trumps despite the meagre fare we present!!

Thanks to the RSA and Sandy.

Canvas for artists was subject to taxation in Britain until 1831. Three marks, each with a different purpose, can often be found on artists’ canvas:

The supplier’s mark gives their name, address and type of material.

The frame mark consists of a compartmentalized frame with changeable numbers and letters; these record the dimensions of the material and certain other information such as the year.

The duty stamp took the form of a crown above a royal cipher, GR, interlaced and reversed, often with the word 'LINENS' below; it indicated that duty had been charged on the canvas recorded in the frame mark.

In this case only a frame mark is visible, and then so indistinctly as to be unhelpful. A pity. But the photos tell us that the canvas has been left undisturbed. As was common at the time it is on a strainer without corner keys for altering the tension.

Separately to the frame mark, I think I can make out the faint white chalk numbers, 37.

Thank you Jacob - and again apologies that the mark is so faint as to be unhelpful!!

Does the lack of the crowned cypher therefore indicate that tax has not been paid, or that it post dates the ending of taxation on canvas in 1831?

The lack of the crowned cypher is not necessarily significant. The frame mark indicates that the canvas is 1831 or before (occasionally the painting, as opposed to the canvas, is later).

The presence of marks depends on a number of variables, including whether the canvas was taxed on the roll or following stretching to size.

Yes, I agree about the slow evolution of style-in all aspects of male and female fashion...... Also I had not taken into my mind the sideburns that are just about visible in this portrait. I have tried to find examples similar to the ones in our portrait but found this hard to pin down. I found some in the 1805-20 period but more from c 1825.These are not the huge mutton chop style of the early Victorian period onwards from the early 1830s...

Random shot, on the basis of being someone close to the RSA: could it be a 'full frontal' of a young David Octavius Hill (b. 1802)?

D O Hill was indeed a hugely critical a player for the Academy, and on that account we would expect any portrait of him to be better documented.

More importantly however, when matched with photographs of Hill, we do not believe the sitter in our portrait to be him.

Could this be James Clark Ross???- featured in an earlier discusion. Obviously a young man with wealthy and important parents.

I fear that's in the same category as my random Hill suggestion...JCR is more 'leonine', especially in the hair, and though we've not yet resolved the artist of this

it shows him at about the same time the RSA's young man was probably painted.