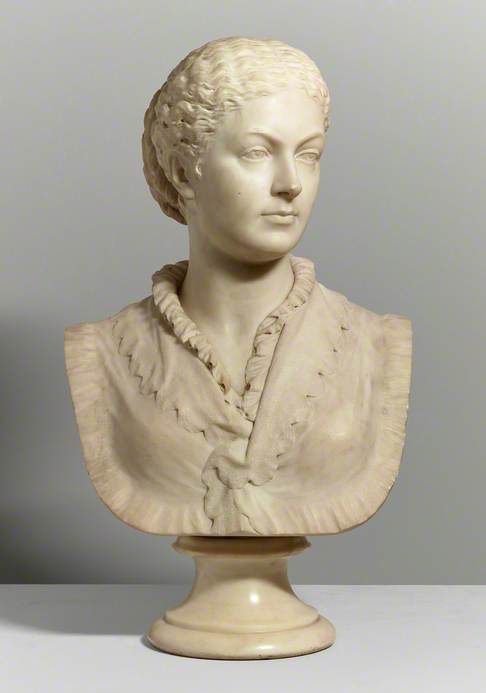 In 1881, the year this bust was made and the year Brodie died, he showed a single work at the Royal Academy, a marble bust of a Mrs Asher (see below):

This is purely speculative, but she might conceivably be the wife of Alexander Asher of Edinburgh, who became Queen's Counsel and MP in 1881. He married, in 1870, Caroline Julia Gregan Craufurd, who died in 1922.

Helen Scott, Curator, 3/12/20
'This is really interesting, but I'm afraid I'm not able to shed much light on it. The sculpture was catalogued as 'Unknown Lady, Possibly Lady Usher (d.1902)' in the late 1970s, when the whole collection was inventoried for a printed catalogue publication project, and this title has continued in our records ever since. I'm afraid I don't know what the basis of this title was in the 1970s - whether the bust was given the title at that point, or whether it had been known by this title for many years beforehand.

I wondered if perhaps the name had anything to do with Andrew Usher (1826-1898), who was a whisky distiller and philanthropist in Edinburgh. He funded the building of the Usher Hall, a concert hall in the city, and we have several busts of him in the collection (though none by William Brodie). However, I haven't been able to work out a relationship to the bust, even with the date 1902. I don't think the family had a peerage ... I'll check our William Brodie files to see if there's anything there. I'll let you know when I've looked.'

The Andrew Usher mentioned above never received a title from the Crown from what I could find, so his wife would not have been Lady Usher.

Andrew's Lady Usher was born in 1831, so she would have been 50 in 1881 when the bust was made, which looks younger than 50 to me--but there's always artistic flattery.

In June 1881, Brodie also submitted, to the Fine Art Exhibition in Aberdeen, busts of Baroness Burdett-Coutts (then 67 years old) and of Ellen Terry (then 34 years old).

Well, it's certainly not Terry or Burdett-Coutts. The similarity of 'Usher' to 'Asher' could just be coincidence; but with the extra link of a shared date I suspect that's the right track to be on. Unfortunately, the 1881 RA catalogue entry tells us nothing more.

The Collection have now checked their Brodie files, but unfortunately there was nothing related to this work.

It appears from the accession number that the bust was given to the collection in 1966 by Miss I. L. Rodgers. Does the collection have more information on the donor?

A few items which may or may not be relevant:

Sir John Usher (who became a baronet in 1899) was the brother of the Andrew Usher mentioned by the collection. Obviously, his wife was not Lady Usher in 1881. An image of her is below:

Jacinto, I will establish with the Collection if they know anything more about Miss I.L. Rodgers. I will also enquire about any Collection conventions on recording titles. At the National Portrait Gallery the convention was to record an authority name with their final title, even if they were not titled as such at the time of the portrait. David

The Collection says that they are afraid that there's no more information about this donor. They also said they don't have an official policy of recording the final title of a sitter, but have seen other examples of this in the collection, so it's possible that the title 'Lady' could have been applied to the sculpture at a later date, even though she was not 'Lady' at the time of sitting/execution.

The leading candidates so far, in no special order:

Caroline Julia Gregan Craufurd, who became Mrs. Alexander Asher in 1870, was the eldest child of her parents, who married in 1836. That Means she could have been no older than 34 when she married and no older than 45 in 1881 when the bust was made.

Does the collection know where the Lady Usher idea came from, or more to the point, the basis for it?

Sorry I missed your comment months ago. The Collection don't know when and why but mention the context in the first paragraph of their comment from 3 December 2020, relayed by me on 8 December 2020.

For what it's worth, Brodie never showed a bust of any Usher at the Royal Academy. On balance, I favor this being the Mrs Asher he showed in 1881, possibly the wife of Alexander Asher, MP of Edinburgh, Caroline Julia Gregan Craufurd (who was at most 45 in 1881).

In this discussion, "Who is this unknown lady who sat for William Brodie?", certain ideas have been mooted but it has been difficult to find the evidence to establish the identity of the woman. I propose to recommend closure in a week's time unless further information is forthcoming.

It is up to the collection, but it may wish to consider titling this bust "Portrait of a Lady (possibly Mrs. Asher)."

While this does not solve the question, I suspect that the donor Miss I. L. Rodgers was Isabella Lidgate Rodgers born in Leith (South), Edinburgh, Scotland in 1892. She was the daughter of William D. Rodgers and Grace Rodgers née Lidgate. She died in 1988.

I suppose it could conceivably be a bust of Grace Rodgers, then, but what was the position of the family?

Marcie's idea as to the donor of the bust as Isabella Lidgate Rodgers is valuable. Do we have a list of works exhibited or made by Brodie? We could the check for Isabella's mother, Grace Rodgers, and for Isabella's grandmothers if we can establish their names.

Jacob, no shortlink as this is on my phone, but here would be a start

The Mapping Sculpture link indicates three 1881 sculptures. Miss Young of Kelly, Mrs Hutchinson (circa 1881) but also ‘a daughter of the artist’. Brodie’s daughter Mary was born in 1842, married architect Sir James Gowans. Not Usher nor Asher but worth considering, or at least eliminating from our enquiries?

The key is the donor of the bust, likely to be Isabella Lidgate Rodgers. Is she decended from, or related to, one of Brodie's subjects, whether exhibited or not?

It should be added that the donor of the bust to Edinburgh in 1966 would appear not to have known its subject. I'd have thought that she would have revealed the name of the sitter had it been her mother or grandmother. So someone less important to her or unknown to her?

I have made the Collection aware of the full name of the donor as suggested by Marcie and the Mapping the Sculpture links to see if they help in any way.

The Collection have replied and can't really add anything at the moment, but feel the suggestion regarding the donor's identity sounds pretty likely, and do wonder if the Usher or Asher might be a red herring and the sitter might indeed be one of the three women identified on the Mapping Sculpture website.

I recommend, subject to the collection and other group leaders, that we close this discussion, "Who is this unknown lady who sat for William Brodie?", on the basis that we are unable to identify the lady, despite valuable ideas being put forward. The collection should consider changing the title to just "Unknown Lady".

Sorry to interrupt the closure process, but having dug into Isabella Lidgate Rodgers’s roots six months ago I might as well share the results. She’s certainly suitable as far as name and (Edinburgh) geography is concerned, and there are no other obvious candidates. But her family background doesn’t support a connection.

Isabella’s father was William David Rodgers (1860-1951), the son of a clerk. At the time of his marriage in Nov 1886 he was a grocer’s assistant living in Grindlay St, a run-down part of the Old Town of Edinburgh; electoral registers show him continuing as a ‘shopman’ in the 1890s, then in around 1900 he becomes a warehouseman in a biscuit factory. This was still his employment in the 1911 Census, when his eldest two sons (aged 21 & 15) were a wholesale golf salesman and an apprentice tailor. The family of five were by then living in a three-room flat in a subdivided town house a bit further out. Isabella, meanwhile, was in service as a 19 year-old ‘general servant’ to two spinster sisters - milk vendors also living in Grindlay St, in a town house again split into many small apartments.

Her mother’s origins are no more promising: Grace Miller Lidgate (1863-1948) was the fourth child of seven of an Edinburgh housepainter (definitely that, not an artist), and there’s nothing in the records to suggest their roots were anything but working / lower middle-class either.

There’s no sign either that Isabella’s fortunes improved later. Scotland’s 1939 Register is annoyingly (and inexplicably) not available online, and access to C20th Scottish Wills is far more restrictive than it is for England & Wales – you can’t even see the probate indexes (which in E&W give you the estate’s value until the 1960s), let alone order the actual Will, without personally applying in Edinburgh. But we can see from the same electoral registers that by 1925 she had moved back in with her parents and two brothers. Thereafter she stayed with her parents, and (after her mother’s death) with her father, in a cottage on the busy main road running through the Edinburgh suburb of Slateford. After his death she remained for a couple of years with two male (?)lodgers, then moved with the same men to a pleasant little terraced house round the corner where she still was in her last traceable year, 1966. Other (?)lodgers had passed through in the 50s and early 60s, but by ’66 she was on her own. I suppose she may have come into money somehow after the 1950s, but there’s no way of knowing.

She may nevertheless still have been the donor. She could have developed an interest in antiques, which even allowing for inflation were far cheaper in the 1930s-50s, especially at the “junkier” end of the market – and so out of fashion were marble busts in those days that such a one might easily have been picked up in a junk shop for no more than 10 or 15 shillings (50-75p). And if you think I’m exaggerating, I have a (signed & inscribed) Richard Dighton portrait watercolour that I bought at auction a few years ago for £100 or so – on the back of the rather nice mahogany frame a previous owner has recorded that in Nov 1951 he paid a shilling (5p) for it in a Hammersmith shop!

So I must agree that even if Isabella once owned this bust, she is unlikely even to have known the sitter’s identity, let alone to have been connected to her.

Thank you, Osmund, for narrowing down the field by excluding the presumed donor's family from consideration. That leaves the four female busts dated 1881 or thereabouts: Mrs Asher, Mrs Hutchison, Miss Young of Kelly and the artist's daughter. Brodie had a daughter (Harriet) who died in childhood and another daughter, Mary, who married the architect James Gowans c. 1860 and died in 1911 (in 1881 she was and should have been listed as Mrs Gowans). I do not know if Brodie had some other daughter(s).

I repeat my recommendation from 22 July, "I recommend, subject to the collection and other group leaders, that we close this discussion, "Who is this unknown lady who sat for William Brodie?", on the basis that we are unable to identify the lady, despite valuable ideas being put forward. The collection should consider changing the title to just "Unknown Lady"."

Jacob, I have passed on your recommendation to the Collection for their approval. Regards, David