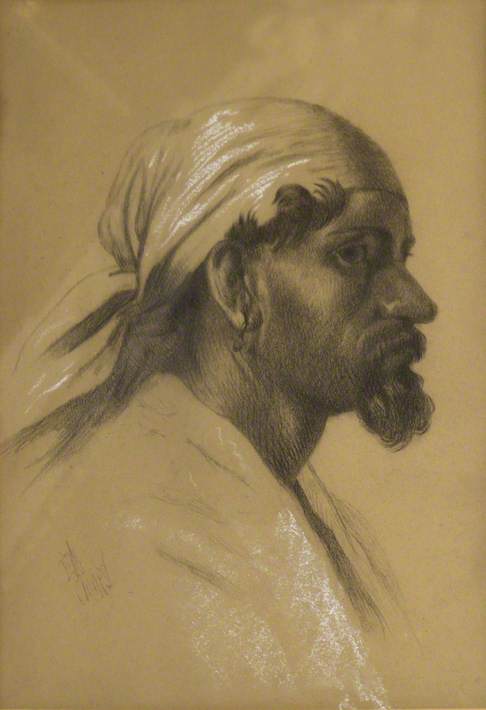 The recently posted online Edward Burne-Jones catalogue raisonné lists this drawing as a fake. The link to the work in the catalogue is here: https://bit.ly/30O5Mdm

I have previously mentioned this work is not by Burne-Jones, but now there is support for this contention. Art UK has subsequently updated its record to ‘unknown artist’.

‘It wasn't created as a fake copy of a Burne-Jones, but its signature led to it being attributed to him. It looks like it says E B Jones, but it's not like any signature Burne-Jones ever used. If you were going to fake a signature deliberately, you'd surely make it look like the real thing. Presumably, then, the work is by someone else whose name looks like E B Jones.’

The drawing is signed lower left, possibly EBJ in monogram, with a word underneath that may or may not be Jones. There are three images attached.

It's a perfectly competent academic Orientalist work, but it need not be by a "name" artist. It certainly looks 19th century.

To me, the drawing looks like the work of a competent student or amateur artist. It doesn't look like any works by Burne-Jones that I know of. The signature appears to read "E J B Jones", so that genuinely may be the name of the artist. An unsigned watercolour of the same subject by another hand was offered for sale at Wotton Auction Rooms on 1 May 2018 (part of lot 903). A few months later, a drawing of the same subject was offered for sale at Ewbank's on 12 September 2018 (part of lot 1589), signed 'J Astley' and dated '1883' (see attached images). These two works and the Dundee drawing all appear to based upon the same source image, probably a print. If the source image can be correctly identified, it may be possible to date the Dundee copy more accurately.

Perhaps the monogram should be read as EJP -- for Edward John Poynter. His wife Agnes was a sister of Burne-Jones's wife Georgiana (they were two of the famous Macdonald sisters). The drawing, if by Poynter, could easily have got into the collection of Burne-Jones, thus being inadvertently sold as by the latter at Christie's in 1923.

As Scott has shown, there are multiple copies of the same head, which might exist as a print, suggesting it was the source for an exercise by students. One drawing is dated 1883.
I wouldn't have thought the work in Dundee was by Poynter. Here are examples of his signature and monogram.

Donato Esposito should be encouraged to look at this

Martin, I will be seeing Donato tomorrow and will mention this drawing to him.

Also, I corresponded with the curator at Dundee in 2017, as myself and others could all see the drawing was not by Burne-Jones (as it was then listed on Art UK). The curator kindly sent this detail which is marginally better than the ones attached above.

Barbara, thank you on both counts. The collection's own image is much sharper.

According to Donato Esposito, who has made a study of Poynter's drawings, the work under discussion is not by Poynter.

It feels like a French Orientalist work to me, but that is just a hunch.

I have updated the images on the site with Scott Buckle's text, as I feel it is the most relevant.

Title
Head of a Man

Medium and Support
chalk on paper

Description
Purchased by the donor as a work by Edward Burne-Jones from Christie's in 1923.