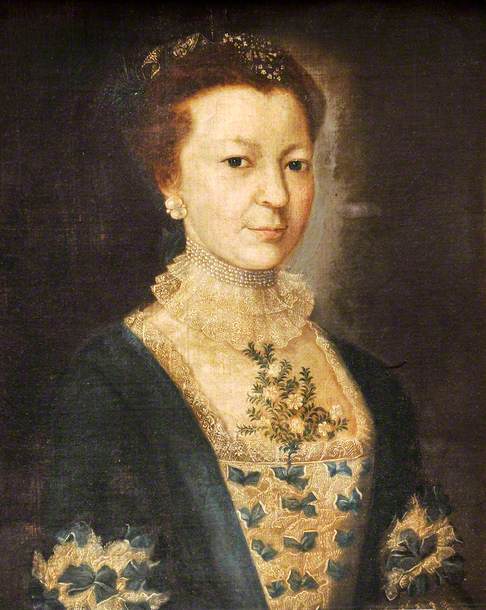 Art UK: Could we try to identify the artist? The National Trust record dates this portrait to 1766–1799, i.e. from the date of their marriage until his death. The dress seems right for a marriage portrait of 1766, when Anne was 26.

The problem is she looks like she could be in her forties.

Please find attached closeup images of the sitter's head and neck, and of the sprig of myrtle (for love) at her breast.

She appears to possibly be the sister of Robert Clive-- 1st Baron Clive. Her husband Sempill died in 1779.
Here is genealogy if it's the correct person .https://books.google.co.uk/books?id=A3nDy6oNw9oC&pg=PA303&lpg=PA303&dq=anne+clive+sempill&source=bl&ots=HMUp1fseZd&sig=ACfU3U2DnIZqusvfdEipW6vnQkZDpZd7yQ&hl=en&sa=X&ved=2ahUKEwiirvXfsYXnAhVPQ0EAHfhvAxUQ6AEwAnoECAYQAQ#v=onepage&q=anne clive sempill&f=false

BTW. The dress seems unusual for an English dress- more of a European look to it perhaps?? And it looks to have a lot of work in it- so quite expensive?

Louis, the link above, 'Open on collection website', takes you to the National Trust's object record, where it is stated that the sitter was the sister of Clive of India.

Marion- Ah yes--- mind you above it says Col George Sempill died in 1799-- but I think it was 1779-- and also he married Jane Butterworth in 1775 which is about Nine years after he married Anne in 1766 , so Anne presumably died somewhen between- and also the possibly interesting thing from the genealogy is that George and Anne appear to be cousins.
Robert Clive was born in 1725 when his father was 32- so perhaps Anne born 1727 ish- so she might have been 39 at the time of her marriage to Sempill-- which would fit in with Jacintos guestimate of a Woman of 40 ish.
As Robert Clive was in India in 1766- Just a guess -was his sister with him there- did she marry Col George there- and perhaps the painting was done out in India-- as I noticed the Dress isn't quite like English dresses of the time--- Just a big guess :-) .

Louis, Ann(e) Clive was born in 1740, or at least baptized that year on 5th May at St Bartholomew Exchange, London – there’s a fuller genealogy linked in Patty’s intro. Patty must also be aware that Ann died at some point between her marriage to George Sempill in Dec ‘1766’ (actually it was 1764, as I’ll explain later today) and George’s subsequent (third) marriage to the widowed Jane Jodrell in June 1775 – to have those dates included in the title is the very purpose of her starting the discussion! This is a link to a full view of the ‘snippet view’ book she mentions in the intro: https://bit.ly/372vFrW

There’s nothing unusual or ‘foreign’ about the dress for the period, though you’re right that it would have been expensive. She and George Sempill were in fact married at Moreton Say in Shropshire; and they were indeed first cousins – their mothers were sisters.

Just another 'BTW' that it was Clive himself who married in India (Madras, 1753) to Margaret Maskelyne, sister of the (subsequent) 5th Astronomer Royal, 1765-1811, Nevil Maskelyne. She herself spent much time living near him at Greenwich while Clive was later in India: a very intelligent woman of whom there are good portraits, esp.that by Dance. It was an age with often interesting lateral connections.

Osmund-- I assumed that as Patty was asking about the sitters dates there was some possible doubt about the proffered genealogy. Perhaps people were Christened as a baby and then Baptised and received into the Church when old enough to understand things- perhaps in mid teens. And perhaps Anne's origins are not so clear????- nothing is as complicated as the intrigues in a family.
I notice that DeBretts 1849 gives Annes marriage date as 1764- funny how different books give different names and dates :-)
And I agree with Jacinto that the sitter looks older than 24.
But this painting does draw one in.I think it is rather nice :-) It looks in poor condition- any information on how it got this way?? I suppose this makes it hard to work out who painted it. Nobody has had a guess yet. But as I like to keep on looking at it I guess it was someone rather good.

Debrett's Peerage records that Anne Clive was born on the 17th April 1740:

"In Bengal, Mrs. Sempill, the wife of the Hon. Col. Sempill, and sister of Lord Clive."

In Volume 3 of "The Life of Robert, Lord Clive", by John Malcolm (published in 2017), the following paragraph can be read regarding Robert Clive:

"Though only in his forty-sixth year, his friends were already fast
falling around him. He had lost two sisters while he was absent in
India. In May, 1771, he had to lament the death of his aged father, as
he had of his sister, the Honourable Mrs Sempill, before the year was done."

I suppose if she was ill for some time before she died, she may have looked older than she was. However, is it absolutely certain that this is not some other woman?

Adult baptism was/is a rarity in the Church of England, Louis, and in the C18th really only happened when it had not happened in infancy. The overwhelming majority of children born to wealthy/high-status parents at this period would have been baptised / christened (the terms are synonymous in the C of E) within a few weeks of birth, unless they were not well enough or there was some particular family circumstance. Even without the Debrett’s entry (thanks, Kieran) one would normally assume that as Ann was baptised at a quite fashionable City of London church early in May 1740, she was probably born earlier the same year.

I write ‘Ann’ (without an ‘e’) as that is how it is spelled in her baptism entry, and also in that of her marriage on 1st Dec 1764 (not 1766 as given in many places, including Burke’s). See attached. In the latter she actually signs her name thus herself in the register....which is not to say that she could not have written it both ways, as many did!

The Reverend Robert Clive was the son of Reverend Benjamin Clive and Susannah Floyer. He married Rebecca Clive, daughter of Richard Clive and Rebecca Gaskell, on 26th November 1759. Rebecca's eldest sister was Ann(e) Clive, the subject of this discussion. The Reverend was, therefore, Ann(e)'s brother-in-law.

As can be seen below, Robert held the office of Prebendary of Westminster and was also was Rector at Moreton, England. His elder brother was George Clive, who held the office of Member of Parliament (M.P.) for Bishop's Castle between 1763 and 1779.

"The King has been pleased to grant the place and dignity of a Prebendary of the collegiate church of St. Peter, Westminster, now void by the death of Dr. Thomas Patrick Young, unto the Reverend Robert Clive, Master of Arts."

"The King has been pleased to grant to the Rev. Charles Moss, Master of Arts, the dignity of Prebendary of the the collegiate church of St. Peter, Westminster, void ny the death of the Rev. Robert Clive."

The National Archives holds his will, the probate date fro which is the 31st December 1792. In it he his described as the Archdeacon of Shropshire.

An interesting analysis of the symbolic meaning of the use of myrtle can be read here:

There might be a clue in the Testament Testamentar & Inventar of George Sempill, 2nd son to Hugh, Lord Sempill, dated 26th November, 1780. The Inventory might just mention the picture.

Both records can be viewed on Scotland's People website but a small charge is made.

Thanks Kieran regarding the Revd. Robert Clive, which I read as him also being brother-in-law to (also-Robert) Clive of India.

Aha- so she died in India in 1771. Also there is a letter in the British Library. From Anne to her brother Robert. Dated 12 March 1769 at Monghyr-- (headquarters garrison for Bengal). Her husband Col George must have been stationed there. Anyway- the letter basically say that she and her husband Col George are in a difficult situation and could Robert help them to improve their position there.
I suppose that means they were short of money??????
Anyway - back to the painting-perhaps it is unfinished - perhaps it was being painted in India-I still don't think that dress looks english-- and unfinished because she died.????

I would like to thank William Thuillier for responding c/o the Antiques Trade Gazette:

The dress in the portrait of Anne Clive is, in my view, from c. 1755-1762- a great example of fashionable English late rococo style, which had layered frilled cuffs, as shown, and delicate ornamentation like this. Most of that has not survived on remaining dresses in museum collections but is clear in portraits of the period. She wears a stomacher across her centre front typically trimmed with bows. By 1765, women's hair styles had started to gain height- which fixes this portrait, with its natural shaped head of hair, at about 1755-62.I love it... Please see my attachments of portraits with similar styles.

Sorry- I forgot this last image of another woman dressed in a style close to that of Anne Clive : 'Portrait of a young Woman seated'. Gainsborough. 1760 MET NY

Acquisition method
accepted by HM Treasury in lieu of tax and transferred to the National Trust, 1963