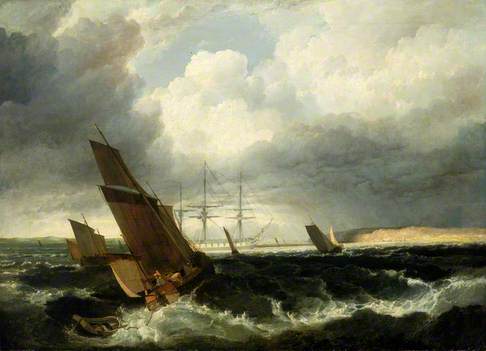 Suggestions for the artist and other examples of his work would be welcome.

The painting was formerly in the collection of the Birmingham screw manufacturer Frederick Nettlefold (d.1881) as the work of Clarkson Stanfield (1793–1867). It was included as a Stanfield in the printed Nettlefold catalogue.

Though the sky might be Stanfield, the rest isn't. I formerly wondered about James Baker Pyne (1800–1870), mainly for the way the sunlit cliffs in the background are done, but could not find anything in a list (or a copy thereof) of his works which I think I saw in the National Portrait Gallery. So far, I have not pursued the matter further.

Until recently, it hung for many years in a corridor just outside my office. It’s been puzzling me for far too long.

Have you considered that it maybe by George Chambers (1803-1840)?
FISHING VESSELS IN A HEAVY SWELL OFF WHITBY looks quite similar, it was sold by Christies in a Maritime Art sale 5482 sale item 91.

Thanks, but I know Chambers well and am sure it isn't. Someone long ago suggested 'Norwich School' but while I can see why that might cross the mind I've not seen anything convincing in support.

Coincidently, Chambers Jr. DID paint a Guardship at the Nore, but it is quite different from this painting.

Yes; and in terms of any single artist's work it perhaps most frequently in Turner's, but in all instances, irrespective of artist, well out on the Nore Sand anchorage, usually from north and west, emphasizing its isolation, not from the east (which it would have to be here) placing it close in under a higher coast than that of the Isle of Grain, which is what is the land behind would have to be - though one has to take artistic licence into account. And, as already in the information supplied opnline (and your image) guardships were bigger, at least two-deckers. I also can't think of another Thames picture with sailing trawlers in it of the type shown - Channel or East coast would be more their sort of ground: these are also part of the puzzle, which includes the received title. If its what it says, its a romanticized version with compositional affinity to Turner's missing 'Leader seapiece': if not, hard to think where else.

There appears to be an inscription in the very lower left - ending AME?

Pieter, I ask forgiveness if obtuse. I am not surprised at your discomfiture. This is a most unsettling image to fall under that title. I am only an amateur as you know but I have, since I was young, seen those approaches several times from the sea. If we are saying the River lies ahead then the two coasts shewn might be hard to find here in that orientation? Even if the Medway is suggested then the view is hard to take. I am not qualified to be in any way precise but might the key actually lie in those brutal and powerful luggers? Where in the Sceptered Isle would they be from? They are crude to say the least especially in the stern detail and they do suggest to me vessels from outside our waters. The punt is surely not British? Heigh ho this is what happens when an old fart like me starts in!!

Have you considered John Christian Schetky (1778 -1875)? Although he tended to paint specific events, the dramatic composition, with a lively sea and sky, certainly resemble his work.

Pieter- I have read the blurb on the NMM website.It sums it up nicely. British frigate off the south coast.I have looked at Stanfield's and Schettky's marine paintings- don't think so----and also Turner's.
I must ask the obvious question--- are you sure it's not a Turner???

Sorry all: in my view its not Stanfield, Schetky, Turner or anyone I can so far put a name to or (even without a name) produce another example by. The only other marine I have seen which chimed a similar bell in terms of the palette and the painting of boats was a coast scene by someone called Byron (W. Byron I think, but only by memory) which a friend had - and I've never found anything else by or about him either.

My only caveat is that the sky might be Stanfield but not the rest: he was reported to have added (or finished) a sky to something by George Chambers after his death in 1840, though in my view it is also not Chambers. I have never found any mention of Stanfield doing it for anyone else but if he did it might explain where the attribution came from, which is the one it originally had in the Nettlefold Collection. How it got there is something I also haven't investigated, but I think the Nettlefold archive may be in Birmingham: that is where the family prosperity started with John Sutton Nettlefold (1792-1866) the wood-screw manufacturer, one of whose sons was Frederick (1833-1913) and whose son in turn was Frederick John (1867-1949). Where the family art accumulation started I cannot recall but the Nettlefold collection, as catalogued in four volumes in 1933 by C. Reginald Grundy, was that of Frederick John. It gives no clue as to which generation acquired this painting or where from.

Here is link to painting by William Henry Williamson. Similar fishing boats in foreground and Frigate in background. ?????
http://www.findartinfo.com/english/art-pictures/0/13/0/oil/page/102265.html

Title
Guardship off the Nore

Description
A painting showing a frigate anchored in the distance off the English coast. The round form of its forecastle head bulwark indicates a date of about 1820 at earliest. There are two sailing trawlers in foreground and the one closest to the viewer is shown towing a small boat in the lively sea. The cliffs on the right and the frigate are both picked out by a shaft of bright light through the dramatically piled-up clouds. This may be intended to reinforce a sense of national identity. The painting came into the Museum in 1946, with its existing title and firmly ascribed to the nineteenth-century marine artist Clarkson Stanfield, from the collection formed by the screw-manufacturer Frederick Nettlefold of Birmingham (d.1881). The frigate is too fully rigged to be a credible representation of a guardship, and they were anyway usually larger vessels, while it is also far from certain whether the location shown is the Nore (the junction of the Thames and Medway). There are one or two instances when Stanfield worked on other artists' pictures – for example finishing one by Chambers after the latter's death in 1840 – and while he could have painted much of the sky in this example there is no other evidence for this. The rest of the picture is certainly by another hand. Though ultimately deriving from Dutch seventeenth-century models, the composition and aspects of handling, especially the coast on the right, show greater influence by J. M. W. Turner than Stanfield, probably through his 'Liber Studiorum' prints such as that of the now missing 'Leader Seapiece' of c.1807–1809. The authorship is considerable puzzle, since Nettlefold had a good collection, and was a considerable Birmingham art patron.