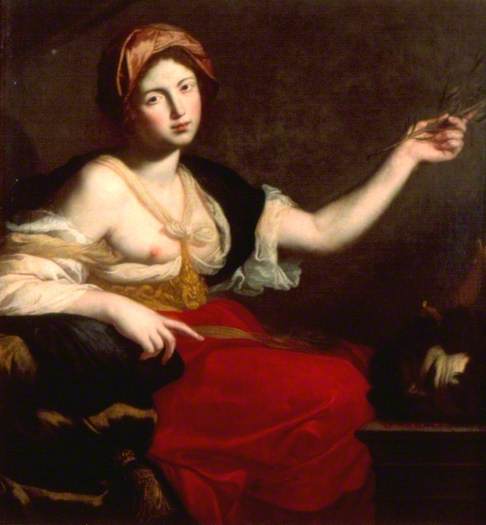 Without knowing more, it reminds me a little of Elizabetta Siriani's work. Even the costume is similar from one of these two paintings of ES.

Agreed, this is 17th century.

This is certainly not the type of picture associated with Vigée Le Brun, who was a portrait painter. Also, I am not convinced this is 18th century, pace the NICE Paintings entry.

To me this is by Giovanni Ricca. His corpus of paintings is still being compiled, and he is often confused with Francesco Guarino - so if this painting can be attributed to Ricca, I think it will need to remain tentatively attributed for the time being.... But it's certainly not connected to Vigee Le Brun.

Please contact Giuseppe Porzio/Riccardo Lattuada/Viviana Farina/Nicola Spinosa to confirm the attribution. They are spearheading the compilation of this artist's works.

The lighting looks influenced by Caravaggio, and 17th century seems rather more likely than 18th. Both Ricca and Guarino were 17th century painters active in the Naples area. A connection to Vigée Le Brun is quite implausible at best.

Here's a Ricca Madonna with a similar face:

Another Judith, also by Ricca;

I would support an attribution to Giovanni Ricca.

As suggested by Nicholas de Gaetano I have sent an enquiry to Riccardo Lattuada to see whether he can confirm a possible attribution to Giovanni Ricca.

The strong colours and tenebrism of this painting certainly make it look like a Neapolitan picture of the first half of the 17th century. But I wonder if rather than looking at Giovanni Ricci, we might be better picking Francesco Guarino. The latter's painting seems to be more soft-focused that Ricci's whose line is sharper and clearer, and Guarino also seems prone to more dramatic gesture.

Ooops! Thanks for picking that up Jacinto - that's what happens when you post at half two in the morning. I meant Giovanni Ricca of course.

I was impressed by the similarity of the model here to the examples in Ricca's work you gave above, but of course painters working in the same city at the same time might well use the same people to pose for them. This seems to have a more graceful, 'soft-focus' feel to it, more characteristic of Guarino. (Maybe it's that sort of feeling in the picture that made people think of Vigée Le Brun).

If as Nicholas said above, the corpuses of the two are often mixed (and I've seen the same painting attributed to both) then I may be looking at the wrong paintings anyway. And there are lots of other painters working in Naples in a similar manner at that time as well (at least till the plague of 1656 kills most of them).

Yes, at this point, only an expert would be able to say with authority whether Ricca or Guarino is a better fit, and no doubt a Ricca expert is quite familiar with that type of question.

I thought you might be interested in the nearly identical necklace and head of Holofernes in this 16th work that is attributed to Vincent Sellaer.

The Sellaer Judith is a Mannerist work, while ours is Baroque.

We are trying obtain a better image to send to Riccardo Lattuada.

Title
Judith with the Head of Holofernes