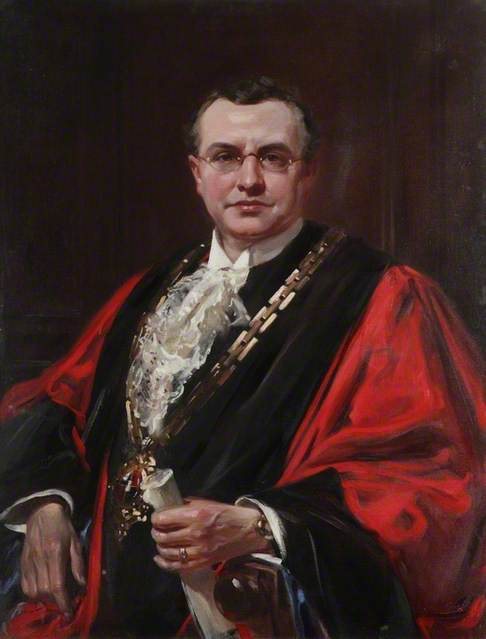 The sitter's grave is in Smallcombe Garden cemetery in Bath. His family can be traced from this and maybe they know who the artist was.

Whilst the record previously recorded a death date of 1931, which led to linking this record to the theatre manager Sir Arthur Carlton (1865-1931), the painting clearly shows a sitter in mayoral robes, as one might expect for the Collection. The list of mayors of Worcester https://bit.ly/3kuAzG7 shows that an Arthur Carlton was mayor between 1916 and 1919 and 1922 to 1923, so this appears on first sight a different Arthur Carlton. The painting is signed and dated [?1918) in the bottom right hand corner, see attached image.

Presented by the sitter to Worcester Guildhall on Monday 11th April 1921.

Sir Arthur presented a portrait in oils of himself to the City on 11 April 1921.
Unfortunately the report in the Bath Chronicle and Weekly Gazette 16 April 1921 (attached) makes no mention of the artist.
~ ~ ~
In 1917 Sir Arthur presented his predecessor Alderman H.A. Leicester with a portrait. (Birmingham Daily Post, 4 July 1917, attached)
Alderman Leicester promptly handed it back to the City. (Mrs Leicester was presented with a copy, so the original being handed back sounds pre-arranged).
Is the portrait of Ald. Leicester still in the Worcester Guildhall collection?
Is it, given the portraits are 1917 / 1918, possibly the same artist?

Attached is a photograph (although not the best quality) of Arthur Carlton in his robes of Office.

Could it be that this portrait was painted by Leon John Sprink?
Does the signature say Leon Sprink?

The following is from some research I did last year…..
Leon John Sprinck was born in Rue St. Honour, Paris in abt 1865 (according to the naturalisation papers). It appears that his personal information can is sometimes be mixed up with the details of his father.
Leon Sprinck was the Son of John Louis and Wilhelmina Sprinck. John Louis was a Russian born, St. Petersberg trained Painter, who was also allegedley the Professor of Painting to the Imperial Court in St Petersberg.
Leon Sprinck was also a citizen of Norway before being naturalised as a British Citizen in 1898, as were his parents.*naturalisation papers attached*
He married His wife Emilie in 1898 and lived in Hampstead Heath, London.

Leon Sprinck was more well known for his oil portraits but also exhibited work pastels (his father had written pamphlets/books on using the media.

Sprinck seems quite likely. The date, of course, is not "mid-20th C" as currently given.

Funnily enough, I have research for the Alderman Leicester portrait, as the information that was included in the above post was a part of the submission sent in in Sept 2019 as supporting evidence, for a proposal that the portrait of Alderman Leicester by an ‘Unknown Artist’ had been painted by Leon Spinck.

Leon Sprinck's signature is distinctive, An example from 1909 is here: https://www.walpoleantiques.com/portrait-leon-sprinck
(with an acute accent over the 'e' in Leon).

An example from 1915 can be seen here: https://www.antiques-atlas.com/antique/leon_sprinck_oil_helene_le_gonidec_de_traissan/as237a1034
(possibly with an acute accent).

In the detail image of the signature posted by David at the head of this discussion I discern a characteristic 'Sprinck', although not obviously the 'Leon'.

I think there is scope for re-examining Sprinck's birth date given as c.1862 on ArtUK and elsewhere. This presumably derives from Sprinck’s death record in the fourth quarter of 1948, in the Croydon registration district, where his age is stated as 86. Self-evidently, the number was not provided direct by Sprinck. However, the age of 33 as given in his naturalisation papers of 31 January/5 February 1898 is undersigned by Sprinck himself and the age of 44 on the census return of 1911 is written in his own hand and undersigned by him. To be 33 in January/February 1898 means he would have been born in 1864 or 1865, while to be 44 in (presumably June) 1911 means he would bave been born in 1866 or 1867. Although the naturalisation and census ages are unfortunately not consistent, I suggest it is more likely that Leon Sprinck was born between 1864 and 1867, than in c.1862.

In the census return of 1911 Sprinck signs himself with an acute accent over his first name. it is possible that he dropped the acute accent as the years passed.

I submitted much of the biographical information mentioned above for the Alderman Leicester painting. Should I post it again for this discussion?
I’ll have a check of the dates in my files.

And thanks, Elin: it would be interesting to see here your findings on Leon Sprinck. Despite his professional success, he features only slightly in the usual reference books -- largely, I think, because he rarely showed at the big public exhibitions.

An interview with Sprinck which says he was born in 1866:

To assist those who do not have access to Ancestry, I have attached the 1898 naturalization record (Leon John Sprinck) mentioned by Elin (2 files) and the 1911 Census of England return mentioned by Richard (Léon Sprinck).

Thanks, Marcie; and to Oliver for that fascinating record of the interview with Sprinck published on 19 November 1927. The most likely year of the artist's birth now seems to be 1866.

The article refers to Sprinck's first showing at the RA in 1893. That was a single exhibit - no.527, 'Louis Ries, Esq.', submitted from 4 Langham Chambers, Portland Place, London W. Not only was this Sprinck's only exhibit ever at the RA, but it would appear to be the only work he showed in a public exhibition in London. However, between that year and 1903 he did exhibit two items at the Walker Art Gallery (presumably in one or two of the Liverpool Autumn Exhibitions) and one work at the Royal Hibernian Academy [information from the Johnson/Greutzner dictionary].

‘A Guide to Pastel Painting’ by J. L. Sprinck (the artist's father), mentioned in the article, was published by George Rowney & Co. (supplier of artists' materials) in 1889, with many subsequent editions. By the time of the sixth edition, 1910, a chapter by Leon Sprinck, 'How to Paint a Head in Pastel’, had been added [information from Abebooks].

Joy Lister separately emailed Art Detective with this biographical information on Carlton: 'Arthur Calton came to Worcester in 1903 as a lessee of the Theatre Royal. He had interests in several Theatres throughout the Country and was a pioneer in early cinema. A keen supporter of amateur dramatics. He also favoured the use of Theatre in fundraising activities, notably for the Worcester infirmary. He became Mayor of Worcester in 1916 and served three consecutive years in office, devoting much of his energies into supporting the war effort, for which work he received the CBE in 1920. He was appointed Mayor again in 1922 for a fourth term. He spent a great deal of his time promoting Anglo-American friendship, largely through sporting activities with Worcester Massachusetts. Arthur Carton was knighted in 1924 and died in 1931.'

Here are the attachments again.

Further useful details would be
- the maiden surname of his mother, possibly Orfa if the same as her reported stage name ('Madame Orfa' -also not imediately apparant as such on the web)
- date of his parents' British naturalization
- maiden name of his wife, plus her dates, and date of marriage
- places of residence (28 Willow Road after marriage and 19 Friern Park Road, N. Finchley in 1911 -with two children, so was that all?- but if his studio was in Chelsea in 1927 that suggests a move south unless he commuted
- did he in fact go and work in the US as then suggested he might
- anything more in the 1930s and 40s, inc his exact date and place of death in 1948.

Some further detail is here (though the Sprincks seem to have left Russia well before the 1917 Revolution): https://www.walpoleantiques.com/portrait-leon-sprinck

Three articles with information are attached: the death of John Louis Sprinck on July 23, 1896, the marriage of Léon Sprinck to Emily Margaret Macdonald on August 22, 1898, and the death of Emily Sprinck (née Macdonald) on Saturday, January 29, 1949. If Emily Sprinck passed away “six weeks after her husband”, he must have passed away in December 1848. The name of her father is incorrect in her obituary.

Emily Margaret Sprinck was born on March 13, 1866, according to her record in the 1939 England and Wales Register, attached. Her parents were Francis Bienfait Macdonald and his wife Georgina Macdonald (née Canty) (see attached marriage record).

As shown on this record on the website of the National Archives of Ireland, in 1901 Léon Sprinck was a visitor in Ireland. https://tinyurl.com/456nfrvc

The attached probate record for Emily Margaret Sprinck shows that she passed away on February 1, 1949 (not the date from the news article).

A notice in the ‘Hampstead & Highgate Express’ of October 23, 1886, attached, informs the public that “Mdme. Sprinck and M. Léon Sprinck ... conduct Drawing and Painting Classes for children and beginners every Wednesday and Saturday afternoon from three o’clock to five p.m.”

A notice in the ‘Hampstead & Highgate Express’ of February 12, 1887, informs the public that “Prof. Sprinck continues to hold his Drawing and Painting Classes for Ladies on Wednesdays and Saturdays”.

The first notices that I could find for Marie Sprinck were in 1875 when she was known as “Mdlle. Orfa, the Russian contralto”. I have attached an extract from an article in the ‘Chelmsford Chronicle’ of April 22, 1887.

Tragically, in December 1899 Marie Sprinck was visiting Amalfi, Italy, with her friend Alice Weir (the daughter of an M.P.) when they were killed along with eight other people in a landslide. I have attached two articles.

Lots of information there, providing the attached drafts to be shot at.

Those drafts look very good, Pieter. An interesting family, for sure.

Leon Sprinck’s wife Emily wasn’t the daughter of Sir William Russell Macdonald (unless a family secret was revealed in her obituary). As shown in her marriage record (16/11/2021 17:37), her father was Francis Bienfait Macdonald of 45 Netherhall Gardens, Hampstead. This is confirmed in the 1901 England Census, which shows that Emily and baby Donald were staying with her parents, her sister Georgina (who later married Frank Ernest Griffiths-Letts), her widowed aunt Emma Macdonald, and five servants in Hampstead while Leon was in Ireland. I have attached that record as well as the probate records for her parents.

Thank you: so much for believing what's written in the papers - the 'Norwood News' obituary of Emilie/Emily is clearly as mistaken about her father as her husband's (non-existent) professorial positions in Russia and Oldenburg. As probably apparent, I don't have home access to Ancestry etc or BNLA, so can't immediately check things that need that.

Those are just about perfect, Pieter. Thanks again.

I would probably have copied your sentence in the John Louis write-up about Leon and his mother giving art classes to children and beginners into the write-up for Leon. And, the death of Emily Sprinck was on February 1 not January 1.

The top ad in that extract from the ‘Hampstead & Highgate Express’ of February 12, 1887, shows that a business in Hampstead was offering language lessons and translating many languages including Danish! The languages listed were French, Italian, German, Danish and Swedish. Was this the Sprinck family?!

I think it would be worth adding to your excellent summary, Pieter, that Sprinck the younger sometimes signed both documents and pictures with his first name accented as Léon.

'...In the late 1920s, when his studio was in Chelsea, he developed a strong visiting American clientele and was reported as considering going there, though whether he did so is not yet known. Sprinck sometimes signed both documents and pictures with his first name accented as Léon.