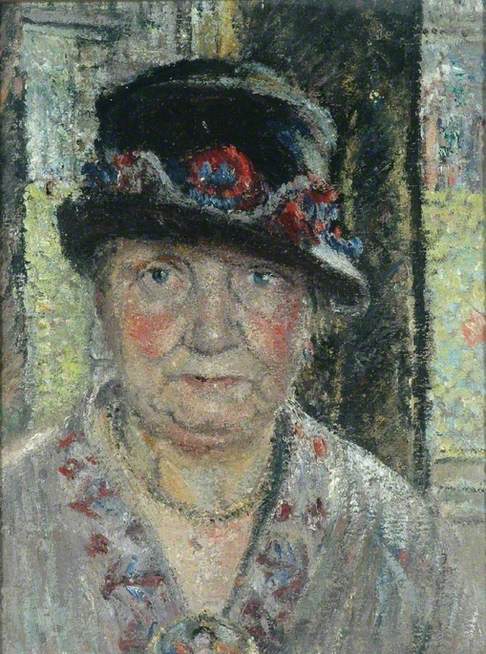 This is an artist of some quality, possibly influenced by the Camden Town painters.

There are no labels or other inscriptions. Two holes are clearer on the reverse.

It looks as if there are initials bottom right including L P?

Could she possibly be the same model as in 'Mrs Mounter at the Breakfast Table' by Harold Gilman? Smaller nose but very similar eyes!

Louis Lazare Picard is his full name. L P are the initials of Lucien Pissarro, but did he ever paint in this style.
The verso seems to be by an inferior and different artist. Perhaps LP reused an old canvas?

Peter, please find attached a close-up of the lower right of the painting.

What about Louise Pickard, whi died in 1928?

This is interesting. Pamela, thank you for suggesting Louise Pickard, which is quite a coincidence as I thought the collection had attributed this to Louis Picart. Antoinette, many thanks for suggesting Ambrose Gordon, and Martin Forrester for proposing Harold Gilman.

Interestingly, when Martin (Hopkinson) sent this enquiry he mentioned that women artists are often overlooked …

I will check with the collection on Monday.

a suitably Yorkshire suggestion from Pamela. I think that Louise Pickard was a member of the Fylingdales Group, and associated with Ethel Walker, whose father was a Yorkshireman, and with Beatrice Bland from Lincoln. It would be worth looking at the titles of the pictures which showed at the New English Art Club, and at the Goupil Gallery. She was in a three artist exhibition at the Goupil in 1924 with Ethel Walker and Charles Ginner [ who was well known in Yorkshire].
With Walker and Bland, Pickard formed' the Cheyne Walkers' in the words of Wilson Steer- they were friends in Chelsea

Stylistically Louise Pickard seems like a very good bet. I do not think it is well enough painted for Gilman, whose style is more careful and particular. Although Ambrose McEvoy is a clever suggestion, I think he did not paint in such an overall rough style - there is ultimately a misty smoothness within his works.

Pickard had memorial exhibitions at the Alpine Gallery and Redfern Gallery in 1928 , the catalogues of which in the National Art Library would be worth looking at.
May be there is a record in the Pannett's archives of the picture's gift or purchase?

Hi can anyone identify my art please?

Ash Bell, as I've written on the other discussion, we can't help you with privately-owned artworks, I'm afraid. On Art Detective we only look at works of art that are in public (and a few semi-public) UK collections.

For further detail of what we do and why we do it go here: https://www.artuk.org/artdetective/about

Art Detective is monitored Monday to Friday 9.00–5.30. Art UK will respond to posts made over weekends or bank holidays as soon as possible.

For reference please find attached my photo of the signature on a Louise Pickard painting I bought some years ago.

Title
Portrait of an Unknown Lady