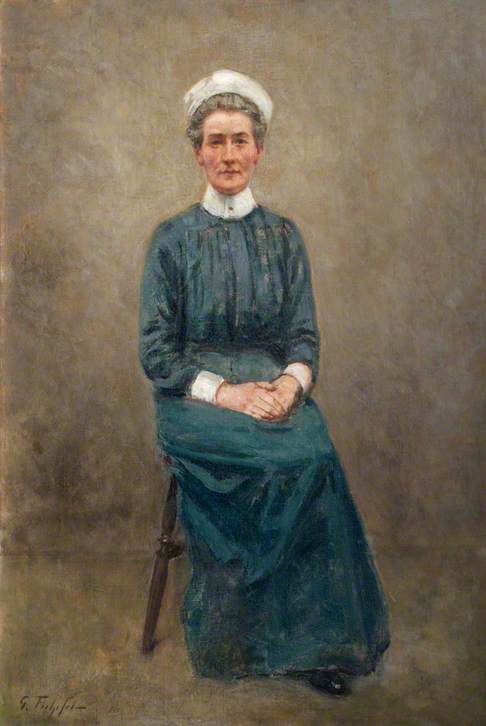 Based on interpretation of the signature, I believe that the artist was George Henry Fortescue Fortt. Is it possible for someone with access to art/artist catalogues to see if he was mentioned?

According to the Marriage Index and an Ancestry tree, he married Margaret Jane Richards of Penzance, Cornwall, in [Jan-Feb-March] 1888, and passed away in Chicago, Ilinois, USA, February 12, 1915.

Due to the size of the attachments, I will send the final attachment in a separate message.

Marcie, while I agree it probably starts 'G. F--', I am quite unable to see how the signature could conceivably continue '[F]ortt' or '[F]ortescue' or anything else that might resemble the name you suggest. It is also quite unlike Fortt's signature on the 1911 Census form - note particularly how his capital 'F' is of a completely different type. Comparison attached.

The biographical details you give us are very premature - you'll need to make a plausible case for the artist from the signature first, or find some documentary connection between him & our painting (or Cavell).

Osmund, I provided all the biographical details because I do not have access to the artist databases that others often reference. I thought the names and dates would help another researcher.

The first initial is clearly a “G.”. George is such a common name that the initial “G.” is often used on documents.

Then there are two names - each starts with a capital letter. The first of those names begins “Fort”. A likely given name that starts with “Fort” would be Fortescue”. Fortescue could easily have been abbreviated to “Fort/s”.

The second of those names with a capital letter starts with either “Ford” or “Tord” (note the “ford” in “G. Finchingford”). The final “t” is heavy so could conceivably be two letters (“tt”). Then there is a heavy dash.

Your composite is very useful. It shows that the signature on the 1911 Census form has the same “G” and the same “ort” of “Fortt”. Only the “F” is different, and it could be because the artist did not use the same signature on his artwork.

Since George Fortt was an artist for many decades, perhaps one of his signed works will be discovered by an Art Detective.

Yes, William, the signature matches that of Fichefet, as below (clicking on the image at the second link will enlarge it):

Fichefet was indeed a Belgian artist. There is nothing else listed under his name on Art UK.

Ah, that's more like it! A collage of other Fichefet signatures of varying (image) sizes attached, alongside the one on our painting.

No doubt in my mind whatsoever. Very well done, William, it's a far from obvious one - I've been fruitlessly picking at it for months, on and off.

We know the following about Cavell, which could explain the interest of a Belgian artist in her:

"She is celebrated for saving the lives of soldiers from both sides without discrimination and for helping some 200 Allied soldiers escape from German-occupied Belgium during the First World War, for which she was arrested. She was accused of treason, found guilty by a court-martial and sentenced to death."

His full name was Georges François Paul Fichefet, who was born in Bruges, Belgium, on the 5th January 1864 and died in Uccle, Belgium, on the 7th May 1954. He has a short entry in the Belgian 'Biographie Nationale' (1984). He was a portrait and landscape painter, and was a student of Jean-François Portaels (1818-1895) at the Académie Royale des Beaux-Arts in Bruxelles. He was a member of the art "cercles" "L'Essor" (up until it disbanded in 1891) and "Pour l'Art" (for its establishment in 1892). An 1894 poster for the group's 2nd exhibition is attached, with the artist's name highlighted.

Acquisition method
gift from the Belgian Government and People, 2000