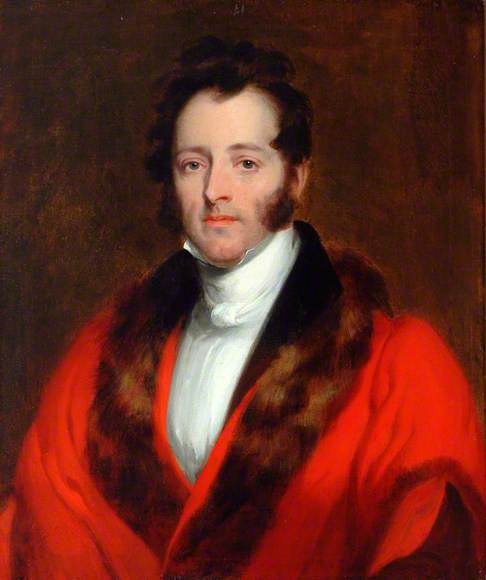 Who painted this portrait of Charles Hanson, Governor of the Company of Merchant Adventurers of the City of York?

This amend will appear on the new version of the Your Paintings website in January 2016. Thank you to all for participating in this discussion. To those viewing this discussion for the first time, please see below for all comments that led to this conclusion.

Charles James Hanson was one of the two sheriffs of York in 1831, so could this portrait have been painted then to recognise his year in office? He died on 19 Jan 1849 aged 63 by which time he had the contract for Yorkshire to distribute stamps.

Thanks Paul, we think the portrait was painted whilst he was Governor of the Company, so between 1832 and 1834. Many of the Guilds wore Aldermanic robes and we believe that this is a robe which is still in our collection today.

Attached is an article from the Yorkshire Gazette dated 14 Jul 1849 about the renovation of the portraits and frames, it does not mention Hanson but does possibly help with other portraits and their artists in the collection.

Thanks for this Paul. This is an interesting article, although we think the attribution of a couple of the portraits to Anthony Van Dyke and Joshua Reynolds might not be the case. There are also a couple of paintings which we no longer have which is also quite intriguing. We like the comment about the paintings being so dirty that it is hard to tell whether the paintings represent men or monkeys. Luckily they are in a much better condition today!

The Yorkshire Gazette (Sat, May 25, 1895) reported about a portrait of “Sheriff Hanson in his robes, painted by Mr Wm. Moore” in an article titles “55 years ago”.

And the Yorkshire Herald (Sat, May 18, 1895) reported about the “Moore” exhibition: “The works by William Moore, sen., consist wholly of portraits, including those of a former Sheriff of York, Mr Hanson, lent by the Governors of the Merchant Adventures’ Company.”

Well done, Andrea. I must have missed this thread altogether when it first appeared, but you seem to have cracked it. Hanson's portrait must, indeed, have been painted by William Moore (Senior), and in the absence of another one in the Merchant Adventurers' collection, this must be it - both the artist's son and the Merchant Adventurers were clearly certain of its authorship in 1895, and I see no reason to doubt it.

From your attached reports and several others, Moore was evidently a highly-respected artist locally, and painted many similar worthies - a report of another York exhibition in 1899 (of his son William's work) gave more detail of the (watercolour) portraits by Wm Moore Senr of Mr & Mrs William Gray that had been exhibited in 1895. Gray became Lord Mayor of York shortly after they were taken.

As well as the 1895 & 1899 exhibitions, another was devoted to the family's work at York City Art Gallery in August 1912. The Yorkshire Post's critic had much admiration for several of the sons, but the passage of time had not helped the father's reputation: he described him as "...a very capable draughtsman who was happiest in drawing a portrait in pencil...in full colour he was less successful, and the examples of his oil painting suggest that he had no business with this medium"!

Incidentally, I think the PCF's listing of the artist as "William I Moore" is confusing, to say the least: http://www.bbc.co.uk/arts/yourpaintings/artists/william-i-moore

I am aware that it does not have a full-stop after the initial, and as such was perhaps intended to be synonymous with "William Moore I" (differentiating him from his son William Moore II); but such niceties are lost on most people - they were on me until I checked his ULAN listing, which amidst the usual confusing plethora of possible terms gives this form as used, and even inexplicably "preferred", in certain contexts. Already his name can be found in other places on the internet with the 'I' assumed to be a middle initial. But I can find nothing that supports it being so. It is not mentioned in the DNB, nor does it appear in a host of primary sources, some of them bearing his signature - marriage registers, his numerous children's baptisms (some non-conformist ones with very full details), Censuses...not even on his gravestone. The 1851 Census return is particularly persuasive, as there *are* middle initials given for several of his children, but not for him; the only signature visible (or noted) on his works, moreover, is just "W. Moore".

Perhaps the best way to list him is in accordance with ULAN's preferred form for display listings "where natural order is preferred" - viz."William Moore I". An informal alternative would be "William Moore the Elder" (or “Senior”), and to either of these might be added an informative "of York". I would urge that this be changed as soon as practicable: the PCF has already become a respected online source, and the speed with which subsequent misunderstandings and errors are multiplied in an internet-enabled world is frightening. The Bridgeman Art Library uses a similarly confusing (or erroneous) form for his name: "Moore, William I", instead of ULAN's preferred "Moore, William, I". To be honest, I wish we could abandon this reversing of names altogether (except when indexing): it always leads to trouble!

This is excellent news Andrea and thank you for working on this (and to Osmund for the further detail). It appears that over 100 years ago we did know who the artist was but in the mist of time that important information has been lost so it is great to be able to attribute the work to William Moore Senior. We did think that after a year it was unlikely that we would get any joy but it gives us great pleasure to be able to amend our records to include the artists name, perhaps for the first time in 100 years!

As long as Barbara (Bryant) has no objection and with thanks to Paul, Andrea and Osmund for their contributions, I think we can happily conclude this discussion -- reclaiming the previously known authorship of William Moore Senior for this portrait, already accepted by the collection. I note that elsewhere the PCF differentiates between senior and junior artists of the same name using the style, for example, John Frederick Herring I and John Frederick Herring II: William Moore I, rather than the confusing William I Moore would be consistent with this.

I wholly agree with Richard's conclusion to this discussion. He is the expert on this material, thanks to his important examination of this family of artists in The Moore Family Pictures, exhibition catalogue, York City Art Gallery, 1980.

This is excellent work on the part of Art Detective and shows that even after the passage of a year, a great result can emerge.

Description
An apothecary in York.