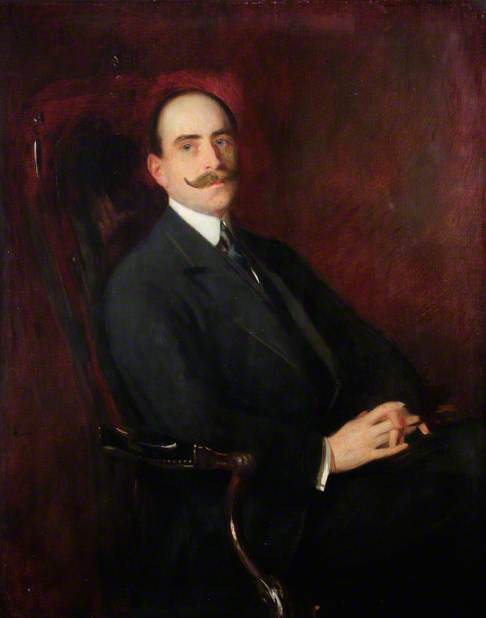 Who painted this portrait of His Serene Highness Prince Francis of Teck, a gift from Prince Alexander of Teck in 1911?

This discussion is now closed. The artist was identified as Emil Fuchs (1866–1929) and the posthumous portrait dated to 1911. The title has been tweaked to reference 'GCVO' and two lines added to the artwork description field on Prince Francis’ association with Middlesex Hospital, the memorial subscription and unveiling.

David - I have suggested sometime ago to artuk.uk that the artist is Henry Thaddeus Jones on a submission which you should hav

Martin, both suggestions for artists previously made were when the record had the dates 1837-1900 recorded, those of his father Francis, Duke of Teck. However, the dates for His Serene Highness Prince Francis of Teck is 1870-1910 – who had a more notably curly moustache, see here https://bit.ly/2UhH06m. The suggestions were incompatible with the 1870 birth date of Prince Francis of Teck.

The De Laszlo Catalogue online records an untraced painting 'A Gentleman, thought to be Prince Francis of Teck' https://bit.ly/3z45hvf

To my eye no hint of de Laszlo's bravura brilliance here, I'm afraid. Look at those frightful hands: even when de Laszlo abbreviates, as in his famous two-hour oil sketches, the flashes of paint he adds to show an elbow or a curl of hair are, by some miraculous process, perfect, alive and of the person - these appendages are a reluctant afterthought, more like a pound of intertwined chipolatas. I know less about Herkomer, but I'm quite sure his technique is better than this, too.

Emil Fuchs.
The London Daily News 24 October 1911, page 7:
"PRINCE FRANCIS OF TECK MEMORIAL
There was a large gathering at the Middlesex Hospital yesterday at the unveiling of a memorial portrait, painted by Mr Fuchs, of the late Prince Francis of Teck by Prince Alexander of Teck. ... "
(full clipping attached)
Fuchs was paid £300
~ ~
Not the only post mortem portrait of Prince Francis, the day after the Fuchs was unveiled at the hospital a Herbert Sidney was unveiled at Christ Church parish hall, New North Road, Hoxton.
Islington Gazette 25 October 1911 page 5 - also attached

Bill Elson has come up trumps again. Unless there are further evidence-based contributions in the next few days, I think we can close this discussion next week.

At least five of the seven on Art UK by Herbert Sidney (1858-1923) also appear to be corporate presentation portraits, inc. one for a hospital.

In the current Teck title, 'CCVO' should be CVO: the former only appears to stand for either a modern Ghanaian trade term or a Canadian veterinary organisation.

...correction: it's a slip for GCVO (see his Wiki entry)

This discussion, initiated 16 July, “Who painted this portrait of His Serene Highness Prince Francis of Teck?” has been solved by Bill Ellson’s discovery (17 July) of a paragraph in “The London Daily News”, 24 October 1911, recording the unveiling of the portrait, “painted by Mr Fuchs”, at Middlesex Hospital.

In style the portrait is clearly the work of this artist, Emil Fuchs (1866-1929). He was a portrait painter and a sculptor. The Fuchs papers in the Brooklyn Museum includes a reference to undated correspondence from Prince Francis (post by David, 17 July, with link). So it is likely that the artist knew him.

Prince Francis died on 22 October 1910 and this “memorial portrait” was unveiled almost exactly a year later. One supposes that it was posthumous. The London Daily News refers to the sum of money obtained, making one wonder if this portrait was actually funded by appeal rather than being a gift from Prince Alexander of Teck, as currently recorded. But the evidence is not to hand to recommend this change. As Pieter points out, the Prince was made GCVO, not CCVO, and this change should be made in the catalogue entry.

Subject to the reaction of the collection and of other group leaders, I recommend that this discussion should be closed.

Perhaps someone -even the collection - could explain the link of Francis of Teck to the now vanished Middlesex Hospital. I agree with Jacob that it looks like there was a memorial subscription/fundraising campaign and the disposition of £250,plus the portrait (@£300) and £250 to the Hoxton Boys' Club suggests merits in the sitter that are certainly less than obvious in his Wiki entry.

His rather more distinguishe elder brother Alexander of Teck, rlater better known as Duke of Athlone, does seem only to have unveiled it (as entirely appropriate).

Here is an article, Pieter, from November 5, 1910, that supplies that information.

“The Late Prince Francis of Teck and the Middlesex Hospital”
https://www.ncbi.nlm.nih.gov/pmc/articles/PMC5276168/?page=1

Thank you Marcie: another case of Q.E.D.

That fills in as regards 'more information':

'Francis was second of the three younger brother of Princess (Victoria) May of Teck, from 1893 the wife of HRH Prince George, Duke of York. When her husband succeeded to the throne as George V, on the death of his father Edward VII in May 1910, she became Queen Mary.

Francis was born and educated in England, and had an army career from 1889 to 1902 that ended when he held the rank of major. Although something of a playboy he then became more involved in civilian matters as a member of the Royal Family. From 1903 he sat on the Board of the Middlesex Hospital, rising to Hospital Vice-President and Deputy Chairman, and finally to Chairman early in 1910. He died suddenly (unmarried) from pneumonia at Balmoral, aged 40, on 22 October that year.

The artist was paid £300 for this posthumous portrait, which was unveiled at the Hospital on 23 October 1911 by Francis's younger brother, Prince Alexander of Teck, 1st Earl of Athlone. It was paid for out of what appears to have been a memorial subscription that raised £800: £250 was also given to the Hospital and £250 to the Hoxton Boys' Home.'

Francis presumably had some connection with the Hoxton home too (e.g. Patron) albeit not immediately obvious. Above I mistakenly also called Alexander, 'Duke' of Athlone rather than Earl, and got the order of birth wrong: apologies (May / Queen Mary, 1867; Adolphus, 1st Marquess of Cambridge, 1868: Francis, 1870; Alexander, 1874)

Pieter, according to an article in the Cardiff Times and South Wales Weekly News (page 6) on October 29, 1910, Prince Francis of Teck was the President of the Claud Eliot Lads Club. See the section “Working-Lad Mourners” in the fifth column.
https://newspapers.library.wales/view/3416242/3416248/146/LIVERPOOL

When I Googled that Club, I found a link to the present-day Crown and Manor Club.
https://www.crownandmanor.org.uk/about

The “Club History” states:
“The Crown and Manor came into existence in 1939 when the Hoxton Manor joined forces with the Crown Club, our origins, however, began 36 years earlier.
​
In 1903, the New North Road Club for lads was founded by the rev Claude Eliot the vicar of Christchurch, Hoxton.”

Thanks again: that connection is close enough by way of explanation. I expect Art UK and the collection will note accordingly and don't see anything missing to delay closure, as Jacob has already suggested.

I have presented the recommendation to the Collection and asked for their response to the evidence provided.

Guy Noble, Arts Curator, uclh arts and heritage, has commented: 'Thank you for this useful summary of the case. I’m happy to accept this recommendation.'

Description
From 1903 Prince Francis of Teck sat on the Board of the Middlesex Hospital, rising finally to Chairman early in 1910. This posthumous portrait, was unveiled at the Hospital on 23 October 1911 by Francis's younger brother, Prince Alexander of Teck, 1st Earl of Athlone. Funded by a memorial subscription that raised £800: £250 was given to the Hospital and £250 to the Hoxton Boys' Home.