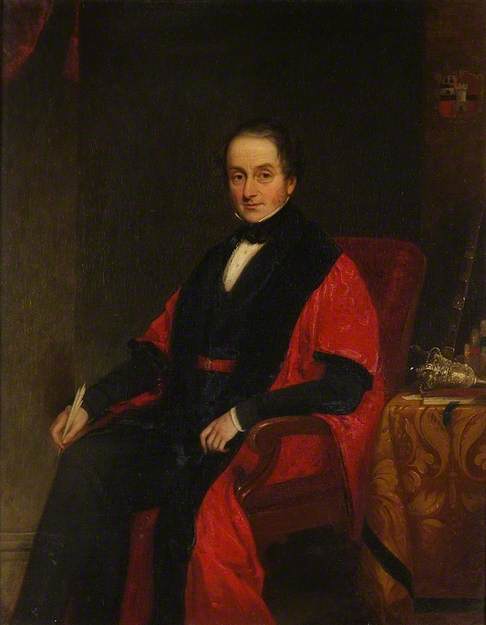 The artist of this portrait depicting the Mayor of Worcester, John Wheeley Lea (of ‘Lea and Perrins’ fame), might be identifiable, especially if it was a presentation portrait. Can the artist be named?

It reminds me of George Hayter somehow, though I doubt a provincial merchant would have been painted by someone favored by Queen Victoria.

The Bishop of Worcester was the sole executor and beneficiary of the Will of Mrs Wheeley Lea. She was the daughter in law of John Wheeley Lea and the wife of his son Charles. After she died in 1916, the will was contested by the family and took another five years to be fully resolved. Her house, £27,000 and some contents eventually went to the Bishop, the rest shared through the family.

As it appears that the painting came direct from the family through the executor to the museum, I suspect there will not be Sales records for this painting. Although as you can see from the attached article as well as leaving the painting of Wheely Lea, he also left a large Benjamin Leader painted to the Museum which according to Art UK the acquisition/provenance is unknown.

I take it, then, that this portrait was not commissioned and thus owned by the City of Worcester, in which case it would presumably have remained in the Guildhall, but by the sitter himself. Has the picture been inspected for a signature or any other potentially helpful evidence on the back of the canvas?

Here's another picture of J. W. Lea as a younger man, but I do not know who painted it:

Solomon Cole seems to have been engaged to paint all the other Worcester 'worthies', this is possibly by him too.

This is quite a convincing comparison (on my phone at least!)

Yes, the comparison with Cole's other official Worcester portraits is quite convincing.

I had been wondering Whether Solomon Cole was commissioned on the election of Wheeley Lea as Mayor to paint this portrait, but as he only lasted for a very limited time before resigning as the Mayor, it could not be presented. Solomon Cole was a local artist living in Bridge St and did seem to be the go-to person to paint the local dignitaries.

A number of the Cole portraits now in the Museum originated from the Guild Hall in Worcester. In fact, Samuel Cole was responsible for their "restoration in 1880.

I'd never heard of him, but for a provincial artist, Cole's work is very respectable. If a little more can be found for a brief biographic sketch, that could be entered into ArtUK.

The official Cole portraits of the other "worthies" are still in the Worcester Guildhall, unlike that of Lea, which followed a different course and wound up in the Worcester City Museums (whose entire holdings listed on ArtUK I had searched for clues, to no avail).

Most of the other Cole portraits on artuk were included in the 1882 Worcester 'Great' Exhibition. The catalogue is available on archive.org, and there's good info on those portraits in the catalogue (and maybe a bit more bio of Cole can be constructed from that). I've left my laptop power cable 200 miles away, and attempting it from a phone is not much fun!

The treatment of all of the elements in the ArtUK depiction of Worcester Guildhall's portrait of Christopher Henry Hebb (1772 - 1861), who was Mayor of Worcester in 1836, are very similar to this portrait of John Wheeley Lea (1791 - 1874), who was Mayor two years earlier in 1834. The mace, the velvet-covered armchair and the inclusion of the Worcestershire coat of arms are but some of those comparable details:

The Worcestershire Chronicle, of Wednesday 26th February 1840 (page 2), carries a report of the "The Testimonial to C. H. Hebb, Esq.", and describes in great detail the painting, commissioned by subscription in October 1837 from Solomon Cole (then aged c.31), which took over two and a half years to be delivered.

In the review, the Hebb painting by Cole is described as "the first full-length from his pencil", suggesting that the portrait of John Wheeley Lea, if also by Cole, must have been executed at a somewhat, though perhaps not too distant, later date.

One thing is certain. Unless Hebb was Mayor a second time, and was also again painted by Solomon Cole, the date of 1862 on the ArtUK website for artist's painting of the Hebb portrait should be backdated to 1840.

The information I've read on Lea indicates he was elected Mayor of Worcester twice, first in 1835 (but only held office for 3 months) and again in 1849, when he served a full term. I expect his portrait by Cole is from his full term as mayor, ca. 1850.

Correction - John Wheeley Lea was sworn in as Mayor of Worcester at a meeting of its Corporation on Monday 12th October 1835, and not in 1834 as stated above. He was replaced, by the above-mentioned Christopher Henry Hebb, on Friday 1st January 1836, as a consequence of the provisions of the newly-enacted Municipal Corporation Reform Act, which was passed on the 9th September and came into force on Sunday 27th December 1835.

It is quite likely, therefore, that Wheeley Lea's portrait was executed by Solomon Cole sometime not too long after his very short term of Mayoral office.

Jacinto, your instincts are most likely correct. If so, it does suggest that Solomon Cole was some style of official portrait painter to the Corporation from his first full-length of Hebb in 1837/1840 and onwards for at least another ten years until c.1850. The accounts of the Worcester Corporation might reveal a payment trail that confirms this suggestion.

The city evidently later employed Ernest Waldron West (1904-1994), presumably another local artist, in a similar capacity. There are six portraits by him in the Worcester Guildhall collection.

Solomon Cole is looking like a strong candidate as the painter of the portrait of Wheeley Lea. Another very close comparison is Cole's portrait of Edward Holland (1806-75), a Worcestershire M.P. which probably dates from the 1840s. https://bit.ly/2Dd7omW

Cole was a more than competent artist who showed portraits at the Royal Academy from 1845 to 1859, while resident in Worcester. His beginnings as a porcelain painter in Worcester factories from 1821 explain his rather neat style of painting faces in particular. Other than being a student of Thomas Baxter in Worcester, there is not much information. Even his life and death dates seem to be approximations although we did learn from Kieran's post that Cole's first full length was the portrait of Hebb, and that took from 1837 to 1840 to complete.

I believe we can now close this discussion and attribute the portrait of John Wheeley Lea (1791-1874) to Solomon Cole. To summarise from the comments in 2018, we learned from E.Jones, that the Bishop of Worcester inherited much of the Lea property, which included this portrait and the painting by B.W. Leader. The portrait thus remained with the family and eventually ended up in the museum in Worcester in 1917.

It did not join the other mayoral portraits in the Guildhall at Worcester, perhaps for the reasons suggested by E.Jones, i.e. Lea's very short first tenure as mayor in 1835. Although he did later serve a term as mayor in 1849-50, I would have thought the portrait shows a man aged 44 rather than one close to 60.

Tim Williams brought Solomon Cole into the discussion and I am convinced he is the artist both by virtue of the style (as I noted in my comment of 10.11.18) and the circumstances of his many other commissions for the city of Worcester. Cole's portrait of Christopher Hebb, as Kieran has told us, was a commissioned mayoral portrait completed in 1840.  Although some have considered the portrait of Wheeley Lea to post-date Hebb's portrait, the reason the latter was newsworthy was because it was Cole's first full length.  It is a very large picture at some 8 feet high.  The portrait of Wheeley Lea is a modest cabinet sized picture. There is more than enough evidence to attribute this work to Solomon Cole and date it to c.1835.

An extensive biographical note on the sitter can be seen here:

The Bristol Mirror, of Saturday 5th September 1835, announced that Lea had been elected Mayor. By the 28th December 1835 he was still signing himself as Mayor of Worcester in various published newspaper advertisements. His tenure in the office ceased, as mentioned above, due to the introduction of the Municipal Corporations Act of 1835. This tenure should, despite its short length, be acknowledged in this painting's title. If painted in this period, the portrait most likely dates from 1836.

Thank you all. The collection has been contacted.

Yes, Kieran, it would be much better (and less confusing) if the title included his first term as mayor, rather than just the second.

The collection is not entirely convinced that the argument is strong enough to attribute this picture to Solomon Cole. When capacity and access is possible they will check the Council’s committee reports relating to the commemoration of the gallery as the ‘Wheeley Lee Gallery’ (somewhere around 1897) to see if that sheds further light. It may be some time before they can get back to us.

Cole draft based on the above attached: additional data welcome, as usual

Many thanks for this excellent Cole draft, Pieter.

Jacob, I was dealing with Worcester submissions, so have asked the Collection if they have an update, specifically checking the Council’s committee reports. David

Acquisition method
gift from the Bishop of Worcester, 1917