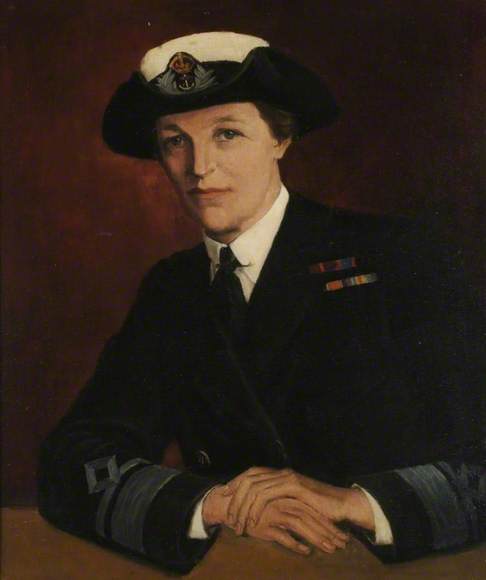 Is it possible to date this painting from the medals worn by this sitter, the wife of the artist Charles Wellington Furse (1868–1904)? If the medals were awarded to her by 1904, C. W. Furse must be a possibility as the painter of this portrait. Katharine Furse could have been in her late twenties in this likeness.

The collection comments: 'The medals are: GBE (Dame Grand Cross of the Most Excellent Order of the British Empire), awarded June 1917; RRC (Royal Red Cross), awarded 1916; British War Medal, awarded 1919 and the Victory Medal, awarded 1919. The depictions of the medals on the sitter’s uniform date the painting to 1919-1920, or quite possibly later than this.'

This discussion is now closed. The painting has been given a date of 1919 or later, since it seems clear that it was based on a 1919 photograph by Elliott & Fry. Without further evidence, the artist remains unknown.

You could take a look at an Illustrated Memoir of Charles Wellington Furse, A.R.A. (London, The Burlington Fine Arts Club, 1908).

The sitter was painted in Glyn Philpot in 1918 also wearing medallic ribbons [Imperial War Museum], but this looks a little later. However she looks very similar in Elliot & Fry's 1919 photo [NPGx92101], which might have bben painted at the same time as the photographic session or even be the source which the painter was copying.

The face is very well executed but the hands rather poorly, which is curious. It doesn't have the lifeless appearance of a portrait painted from a photo, although the photo could have been used for the details of the uniform to save the sitter some time.

She is shown wearing the uniform of Director W.R.N.S., which she was from 1917 to the end of the war. So the portrait was definitely painted after she received her last two war medals in 1919. Which rules out her husband, of course.

Dame Furse is shown with a Rear Admiral's stripes on her sleeves, in what must have been her newly invented Naval officer's uniform. She rose to that rank in 1917 when she was appointed Director of the Women's Royal Naval Service - the WRENS – the equivalent to the rank of a Rear Admiral. Ray's additional knowledge fixes this to 1919.


As to who painted her in this uniform - I leave that to the art historians..

I was just going to reply when I read Ray's comment. As Director of the Wrens, Dame Furse held the rank of Rear Admiral. Her naval uniform- ( which must have been newly invented) - thus has a Rear Admiral's stripes on the cuffs. I would support Ray with his date of 1919, for the uniform, though of course it could have been painted late. She soon left the Navy after the end of the war.

There are photos of her dressed just like this.

I leave the search for the artist to the art historians.

Here's a link to a portrait of Dame Katharine Furse, (1920) by Glyn Philpot, it might be the same one as mentioned above by Martin Hopkinson:-

The painting looks to me like an amateur hand - painstaking and quite insightful of character, but clearly untrained. This set me to wondering if it could be by a family member.

Dame Katharine had two sons by Charles Wellington Furse: Peter Reynolds F. (b. 1901) and (John) Paul (Wellington) F. (born just four days before his artist father's death in October 1904). Although any direct input from the boys' father would have been impossible, I suspect there may have been a sense of an artistic inheritance - and doubtless the presence of much art in the house, and of artist friends rallying round after Charles's early death from TB (aged just 36). Katharine's aunt Marianne North, too, was an outstanding and prolific artist, mainly botanical.

Could this be the work of one of the sons - very probably based on (or inspired by) the 1919 photograph at the NPG ( http://bit.ly/2c8muxX ), but perhaps aged upwards somewhat to the face he knew in, say, the early/mid-1920s?

EDIT: This hypothesis is given some support by the discovery that the younger son, Paul Furse (1904-1978), although a distinguished career sailor, was an accomplished amateur artist - though this was again mainly botanical. See http://bit.ly/2ctI4bT . But I can imagine that in his youth he might have had a stab at a portrait of his mother...as might his elder brother Peter (1901-1970), also a sailor (and cartographer), whom I now discover was also an artist. See: http://bit.ly/2cGB5hI

It's just possible that Dame Katharine's autobiography may elucidate, though that apparently only covers the years up to 1920: http://bit.ly/2cTunbJ

My thoughts are that this is the work of Mr. L. S. Lowry. Probably unsigned? but maybe code marks on back or frame. The hands are right (but odd) for Mr. L. S. He was an official war artist in 1939. The war time pictures I have collected/seen (Imperial War Museum) show only false initials/names...as in some of his postcards. My latest acquisition, a portrait of Her Majesty Queen Elizabeth on her Coronation Day shows no hands. Tho' he confessed that he did not like most of the portraits he painted, I think he got this one perfect and of course unsigned.

This needs an expert on uniforms of the period.

In the Philpot painting dated to 1918 in this forum and 1920 on Wikipedia she is wearing the War Medal instituted July 1919 and something else following it which isn't the Victory Medal in three rows. She is wearing a tricorn with no white cover (wartime pattern?)

In the Elliott & Fry photograph she is wearing a cap with a white cover. Her medals are in two rows but with only one medal on the second row, centred. That single medal does look like it is the Victory Medal authorise 1/9/19. There is a badge on her right arm above her rank insignia. I don't think it is a wound stripe (wrong arm, I think) but I have no idea what it is.

In the subject painting she is again wearing a white cover, the Victory Medal immediately follows the War Medal on the second of two rows of medals but there is no badge on her sleeve.

Given the long time this discussion has been in abeyance, it is worth reviving Osmund's suggestion, which also seems to me the most probable answer, that this is very probably based on the 1919 photograph at the NPG ( http://bit.ly/2c8muxX ) and could well be by one her amateur artist sons.

The posts by Osmund (13 September 2016) and Andrew (9 August 2017) are helpful. As to who painted the portrait we cannot answer with confidence but it may be by one of Furse’s amateur artist sons. The collection should consider stating that the portrait is based on a photograph by Elliott & Fry from 1919. On the second question as to when the portrait was painted, surely we can do no more than state “1919 or later”.

It is unlikely that we are going to be able to progress this discussion further. A recommendation on closing it needs to come from Group leaders, Lou Taylor, Jenny Spencer-Smith and Catherine Daunt.

It seems clear that this portrait of Katharine Furse is based on the 1919 photograph by Elliott & Fry and, although it is interesting that at least one of her sons enjoyed painting as an amateur, there is no evidence to lend weight to the suggestion that this may have been by a family member. The less sympathetic rendering of the features in comparison may indeed suggest the contrary. And perhaps a family member would also have had less need to copy a photograph.
I would recommend that the discussion is now concluded, with thanks to all those who contributed, and accepting that, without further evidence, the artist remains unknown, and with a date of 1919 or later, as suggested by Jacob.

Thank you, the proposed updates have been sent to the collection.