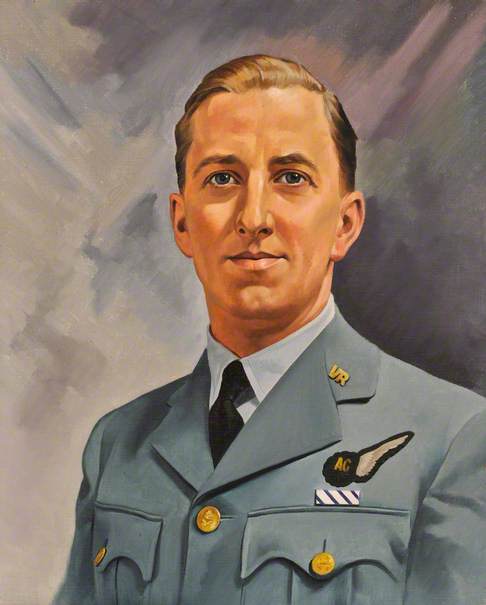 An article from 2017 discussed this portrait.
https://www.welshnewsextra.com/historic-memorabilia-of-two-anglesey-air-aces-is-handed-over-to-museum/#prettyPhoto

The final image on that page is actually a newspaper article from 1942 that includes a photo of Vivian Parry (taken by “Harding, Rhyl”).

Vivian Parry’s full name (Vivian Weston Parry) and date of birth (December 25, 1914) are shown on his entry for the 1939 England and Wales Register. The date of his passing (September 5, 1942) is shown on his probate entry.

Vivian Parry’s entry in the International Bomber Command Centre’s Losses Database shows that he was the “son of John David and Eleanor Myfanwy Parry, of Comlyn”.
https://losses.internationalbcc.co.uk/loss/118071/

Records on Ancestry show that John David Parry and Ellenor [Eleanor] Myfawny Jones were married in 1908. They were recorded as living together in Rhyl at the time of the 1911 Census of England and Wales. John passed away on September 8, 1948. Eleanor’s date of birth, shown on a transit card to the Bahamas (where Captain Vivian Hewitt had a home), was October 29, 1883.

The 1939 England and Wales Register shows Captain Vivian Hewitt, Eleanor Myfawny Parry and three children (the name of the third child is blacked out) living at Bryn Aber (along with a mechanic). Vivian Parry’s siblings were: John Henry Parry (“Jack”)(b. September 5, 1909), Paul Kenneth Parry (b. April 15, 1911) and Myfawny Parry (later Davies) (b. October 25, 1912).

Chapter 17 of the book ‘The Curse of the Labrador Duck: My Obsessive Quest to the Edge of Extinction’ (2009) by Glen Chilton includes a discussion of Captain Vivian Hewitt, his housekeeper Mrs. Parry, and her children.
https://tinyurl.com/5bw7y647

It is entirely possible that the picture in question was painted after a photograph, quite possibly posthumously.

I think it’s not just possible, Jacinto, but virtually certain – the photo used was clearly the same one by Harding reproduced by the Rhyl Journal in his (?Sep) 1942 obituary (see Marcie’s post of 27/08/2022 14:30). The photo does not appear to show his DFC ribbon (awarded March ’42); it may therefore have been taken to mark his commission as probationary pilot-officer in Nov 1941**. And I’m sure you’re right to suspect the portrait was posthumous, indeed probably post-war.

Attached is a comparison between the portrait and the photo which makes the case. Alongside it, too, is a photo of Capt Vivian Hewitt at the same sort of age, which in my view strongly supports the idea that he was Parry’s real father – look at the eyes in particular.

[**Ranks and their insignia in Bomber Command can be very confusing: even after being commissioned with the rank of pilot-officer, Parry remained an air-gunner, and so did not have on his uniform the twin wings of a pilot, just the single one of aircrew. On the other hand the actual pilot of the Wellington bomber in which Parry died was not at the time an officer but *did* bear double-wings as a Sergeant-pilot; he was, moreover, the skipper and commanded the aircraft, notwithstanding his lower rank.]