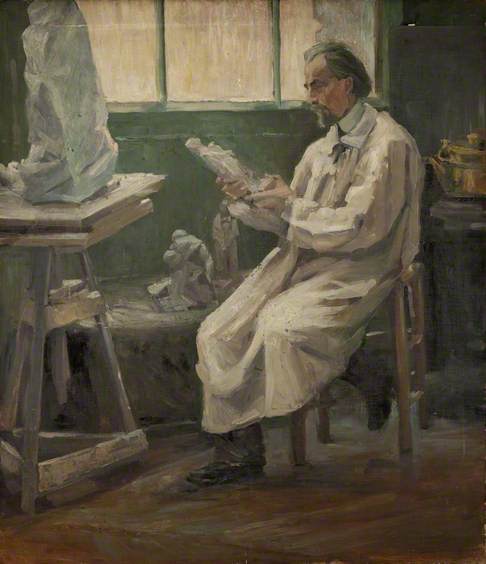 Is this a portrait of the Manchester-based sculptor who was born in Ireland, John Cassidy (1860–1939)? Reginald Barber painted a portrait of him, now in Manchester Art Gallery, which is dated to 1900: http://bit.ly/2v8CENj

For Cassidy see http://www.johncassidy.org.uk and an article in Bulletin of the John Rylands Library University of Manchester 89, 1, Autumn 2012.

The detailed research on Cassidy has been done by Charlie Hulme and Lis Nicolson. Charlie Hulme thinks that this is a portrait of Cassidy and remarks that it was common for members of Manchester Academy of Art to model for each other at this period.

Towneley Art Gallery does not know when or how it came to the collection, and the painting is unsigned.

It could be by the impressionist Pierre Valette who taught in Manchester.

I do not see any facial resemblance between the sitter and the photos and portrait of John Cassidy.
If the painting is by Pierre Adolphe Valette, I think it more likely that this is a portrait of Valette's contemporary at Manchester School of Art, John Millard (1862 -1948).
Millard arrived at the School in 1905, and taught sculpture there until the 1930s.
For more detail about Millard, see https://historicengland.org.uk/listing/the-list/list-entry/1220798
which relates to Macclesfield War Memorial.
So far I have been unable to find a photo of Millard - can anyone help ?
Millard was one of the witnesses (possibly as Best Man) who signed the Marriage Certificate on the occasion of Valette's second marriage, to Helene Andree Pallez, in 1919.
The manner in which the sculptor's smock is painted does look to me like the hand of Valette.

From a physiognomy point-of-view, I, too, would be most surprised if this was meant to be Cassidy. There are five different photographs of him on the Cassidy website dating from 1897-1923; and though some are clearer than others, his appearance is consistent throughout with the plump-faced man in the Barber portrait, but not in any way with this sitter.

John Millard seems a good suggestion, but I can't find an image of him either. He was tricky to pin down, as the dates given for him are quite wrong - he was in fact born (at Wigan) on 12th Jan 1874, and died on 10th July 1957 at Stockport (he was living at Heaton Moor, at the same address given in Mapping Sculpture). His widow Annie Elizabeth (same address again) died 24/12/1963. Their only child Mary Millard (b.1908) died unmarried at Stockport in Jan 1996, so there's no hope of asking a descendant.

[I have all the supporting evidence for this info, but probably won't post it unless we can establish he was the sitter.]

The best bet is perhaps to identify one of the sculptures in the painting. Can Millard be shown to have executed the standing figure in the background? Both artists are covered in the online 'Mapping the practice and profession of sculpture in Britain and Ireland 1851-1951' run by the University of Glasgow. Cassidy's examples of this type of work are better recorded than Millard's, but it would be worth checking the PMSA volumes for Lancashire, Cheshire , Manchester, Liverpool and Merseyside to see if it is a model for a or part of a public monument

The standing figure in the painting is not very distinct, but is not unlike the figure of Sorrow on top of the Macclesfield War Memorial.

Ironically, John Cassidy exhibited a sculpture of "John Millard Esq." at the Manchester Institute of Fine Arts in 1916 (no. 281) - location apparently unknown. http://www.johncassidy.org.uk/academy.html

John Millard had several siblings including a younger brother, George Henry (1880-1965), doubtless the 'G.H.Millard' (?a plaster bust) exhibited at Manchester Art Gallery in 1906. George *does* seem to have living descendants, and I think I've tracked down a grandson who is old enough (b.1939) to have known his great uncle John. I will try and contact him over the weekend (I have a phone no.), and report back.

Having been to Towneley Hall, Burnley, today with two acknowledged experts on the work of Adolphe Valette, I can say that the painting is not by him.
Back to square one !

I have an idea with regards to a possible painter but would also
like to ask if there is anything on the back of the painting please?

My grandfather, Robert Arthur Dawson was the Principal at the Manchester School of Art from 1919 to 1939 - i.e. during the possible period we are talking about - and must have known all the teachers there. He was an excellent portraitist himself but this does not look like his style, so he can probably be ruled out. There is a book I think, on the history of the Manchester School of Art which may help.

Photograph of the rear of the painting with the museum name and accession number.

Could this be an early work by James Purdy [1900-72]? See his self portrait in Gallery Oldham, which owns a number of pictures by him.

Is it possible to have a close up of the face and hands of this painting please?
Thanks very much.

As there hasn't been a comment on this discussion since August 2019, I thought it would be a good time to ask if anyone has anything further to add?

Here is a summary of the main points from the discussion so far:

The suggestion that this is a portrait of the Manchester-based sculptor John Cassidy (1860-1939) appears to be unlikely, as the likeness does not compare closely to photographs of Cassidy or a portrait by Reginald Barber in the collection of Manchester Art Gallery.

A suggestion was made that it was painted by Pierre Adolphe Valette and it is a portrait of one of Valette’s contemporaries at the Manchester School of Art, possibly John Millard (1874-1957), but Valette experts do not believe that the painting is by him.

This must certainly be a painting of the sculptor Sir William Goscombe John (1860-1952). The National Museum Cardiff has a write-up on him. https://tinyurl.com/hvhu8cc8.

This link shows a photo of Sir William Goscombe John on the twitter feed of Mark Rees on February 21, 2019. https://tinyurl.com/av5cm5ty. I have attached a composite for ease of comparison. Note the similar sculpture stand and the similar small sculptures.

I think there are two reasonable options for the artist of this work and I am wondering what others think about them:

I have attached a composite. Note the similar depiction of the sculptures and his collar. The sculpture stand has an additional shelf in the mystery work.

Here is the link to Georgios Roilos on the website of the National Gallery - Alexandros Soutsos Museum, in Athens, Greece. https://tinyurl.com/8n9dje7b. This website includes many works by him.

I have attached a composite. Note the near-identical yellowish-white coat and white collar.

Marcie, while there is a passing resemblance, I have seen no photographs of Sir William Goscombe John where his hair is as long and full at the back or as far forward over his temple as it is in this portrait. Also, by 1912, aged 52, John had a fully white beard and, as in almost every image of him from 1900 onwards, he had conspicuous sideburns that connected his hair to his beard:

If the man in this portrait was John, from his darker hair and beard he would have to have been about 45, which would date the painting to 1905. Even the 1901 portrait by Vedder that you reference above, where his hair is darker at the age of 41, shows John with a characteristic drooping moustache for this era, which is not evident here. To me this sitter looks like a middle aged man with a hairstyle more in keeping with the 1950s or later.

Also, I don't believe that the similarities of the stand prove much, as it is a fairly standard design.

or search "Sculptor's stand" or "sculptor's table" for multiple examples over a wide span of time.

Additionally, most photographs and paintings of the interior of John's studio show a space that appears to be vastly larger than the rather modest space depicted here, as per this from 1902:

All of that said, the only probable way of convincingly demonstrating that this is John would be to identify any finished known sculptures by him that corresponded to the maquettes on the bench beside him or in his hand, assuming that on the stand is block of plaster (or maybe marble) awaiting carving. It seems obvious to me that at least the maquette on the bench would have been chosen by the portrait's painter as being one for a sculpture that would be well known.

I agree that this is most unlikely to be Goscombe John. John seems to have been a man who like to have his portrait taken, and his vanity is our gain: attached is a composite of images from 1885-1937.

As Kieran says, his hair was cut short at the back throughout; and once he had added a full beard to his luxuriant moustache (c.1890?), it remained attached via sideburns to his head hair until at least the 1930s. Over the years he gradually trimmed the sides shorter and shorter (and neatened the shape of the main beard and moustache); but the side connection remained clearly visible until and beyond the point when all his hair was quite white.

Looking at all the images together, I cannot see any point where our sitter's appearance fits logically into the sequence.

Kieran, those are all good points and food for thought.

Your composite is very helpful, Osmund.

I thought I would mention that Sir William Goscombe John’s daughter didn’t think that portraits of him typically looked like her father. The portrait of him by Luke Fildes (https://tinyurl.com/4xy7mnrn) includes this text:
“Sir Luke Fildes' son, also named Luke, married Goscombe John's daughter Muriel, who gave this portrait to the Museum after the sculptor's death. The Museum had been reluctant to take it initially, having six other portraits of him already in the collection. Muriel wrote of her disappointment because 'it is the only one, for the last 40 years, that is really a likeness of my father'.”

Title
A Sculptor in His Studio

Acquisition method
gift from an unknown donor, before 1973