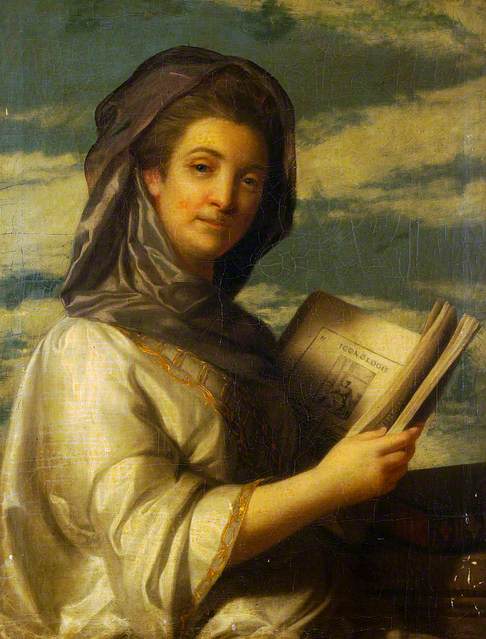 Hi Martin. A clue could be the subject matter herself, possibly? Lady Diana Beauclerk was an artist. She was associated by a surrounding swirl of scandal and intrigue. There is a rather fine biography of the Lady Diana Beauclerk by Beatrice Erskine, publication circa 1903.

Is this portrait of Lady Diana Beauclerk? Is it even British (both appearance and canvas size make me think of France or elsewhere on the Continent)? The woman is holding a volume inscribed ICONOLOGIA, perhaps Cesare Ripa's Iconologia. Why?

There also appears to have been a printing:
Parma: Filippo Carmignani, 1759. As well as by Jean Thomas de Trattnern in 1766.

Perhaps this extract is relevant:

It Looks Italian to me Maybe Painted whilst on the Grand Tour as so many were.

It looks far more likely that the book in the portrait may be the edition printed in Parma by Filippo Carmignani in 1759. The border surrounding the image appears much further towards the outer edges of the book, as there is more text to fit on the page. This is due to the text being bi-lingual, in both Italian and French.

There is a dividing line that separates the text of both languages which almost touches the middle of the bottom of the image. I think this line can almost just be seen on the portait. The Jean Thomas de Trattnern printing of 1766 appears to be only in French, and is far narrower.

Although French born, Jean-Baptist Boudard was the sculptor to the Court of Parma.

This is Beauclerk by Reynolds:

‘Compassion’ as stated earlier is image 98 from vol.1 in each printing,
(not vol.3 as the previous attachment). Correct image as attached.

If the book page in the picture reads ICONOLOGIE and is thus in French, that would suggest a French sitter and picture. Is it possible to get a higher resolution photo of that area of the picture?

Of course, it is possible that a British female aristocrat could read French, but how common was that?

The detail as requested of the book.

Thank you, David. So it is in French. Boudard's Iconologie was first published in 1759 and subsequently reprinted. Boudard was a French sculptor active in Italy.

It would appear the picture was bought in 1933 from A. Cubitt, presumably an auctioneer or dealer, and I assume that was the source of the current identification of the sitter. Can the collection say any more based on its records, such as any provenance information it may have been given?

There is another book on the table at lower right. The woman must have been an intellectual or artistic type of some sort to be portrayed this way; perhaps she had a salon. Lady Di (as she was known) would have had use for such a book, given her work as a painter, illustrator and designer.

Jacinto, I have asked the Collection about your question from 26/01/21.

The original 1759 Parma edition was bilingual (French and Italian text), and it described itself as a work "utile aux gens de lettres, aux poëtes, aux artistes, & généralement à tous les amateurs des beaux arts." Obviously, that would suit someone like Beauclerk, who need not have bothered with the text if she could not read French or Italian, but simply focused on the images.

However, if this is not Beauclerk but a French sitter, the picture could be earlier, perhaps by someone like Nattier.

The Collection have checked their paper files and have no more provenance information other than that listed. However, they do have a 1933 letter from the National Portrait Gallery stating they thought the sitter was Lady Diana Beauclerk.

The Collection have expressed a view that they feel this discussion has gone as far as it can. What is the opinion of others?

The previous year, 1932, the collection purchased John Seymour Lucas’s “Yesterday (The Letter)” of c.1880 from A. Cubitt, Ipswich, the vendor of our portrait. Could he be Albert Cubitt, described as an antique dealer, age 67 in the 1939 England and Wales Register?

I don't think that this is a portrait of Lady Diana Beauclerk, whatever the National Portrait Gallery said in 1933. Is it even a portrait, rather than an allegorical subject? Is it even British? The woman holds an image of Compassion from an edition of Boudard's Iconologie published in Parma in 1759, written in French with some Italian text (post by S. Elin Jones, 23 January).

On this basis, I wonder if a title for the picture, "Allegorical figure of Compassion" or similar would be appropriate, with a looser dating of c.1760-80?

I think the portrait is of Lady Diana Beauclerk. My first attachment compares the Sir Joshua Reynolds “Portrait of Diana Beauclerk” (reversed) to plate 98, “Compassion”, from “Iconologie”, published in 1759 (see comments by Elin Jones). I had wondered about the enormous pitcher in the Reynolds painting and now its inclusion makes sense - it was the source behind the portrait. Even the lady’s looped belt is similar. Reynolds did not include the coins, the birds or the bare feet.

My second attachment compares the Art UK work to the Sir Joshua Reynolds “Portrait of Diana Beauclerk” (reversed). In my opinion, the sitter is the same woman. Plate 98 of “Iconologie” (1759) states (translated): “She is painted with a gentle and affable air, dressed modestly ...”. The head covering and simple Oriental-style dress are likely intended to show the sitter as modest. And her expression is certainly “gentle”.

Is there writing on the spine of one of the other books on the table?

I find Marcie's first comparison intriguing but not her second.

I may be way off the mark, but to me the portrait is reminiscent of the work of James Barry (1741-1806). As far as I am aware, he is not known to have painted a portrait of Lady Diana Beauclerk, but he did paint portraits of many of her close friends and associates, including Burke, Johnson and the Duchess of Devonshire. Lady Diana was resident at No.3 Adelphi Terrace at the time that the Society of for the Encouragement of Arts, Manufactures, and Commerce (now The Society of Arts) moved into the nearby building that Barry was to decorate. William L Pressly (The Life and Art of James Barry, Yale University Press, 1981, p 240) records a portrait of 'A Female Authoress' (no 72) in the 1807 sale of Barry's work, which is at present unlocated. Pressly suggests that the lost work may have been a portrait of the novelist and diarist Fanny Burney, or an abandoned study of Mrs Barbauld for the 'Distribution of Premiums' mural, and states that Barry is not known to have painted any portrait after the 1770s that was not related to his Adelphi series of paintings.

I think this is more likely to be a portrait of a female writer or artist than an allegory of compassion. The latter would almost certainly employ more or less classical dress, and probably less of it, and the figure would be younger and more of a goddess type.

On Marcie's post (18 September), the vase in Reynolds's Lady Diana Beauclerk clearly derives in profile from one by Jacques Stella for "Livre de vases", 1667, as Timothy Clifford identified some years ago. See attached image.

On Scott's post (18 September), I don't think we can really call Lady Diana an authoress, as opposed to an artist. In any case, I doubt our picture is by Barry.

Acquisition method
purchased from A. Cubitt with the assistance of the Felix Cobbold Bequest Fund