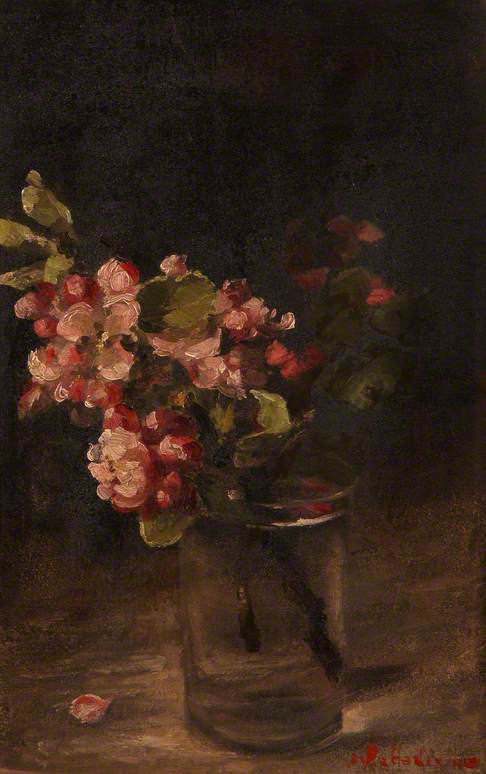 This painting is signed in red lower right. Perhaps someone familiar with still life painting could identify the artist.

The painting was presented by Queen Mary to The Black Watch Memorial Home on Remembrance Day 1923 and presented to the Museum when the home closed in 1988. Perhaps someone versed in the taste and collecting of Queen Mary may know the answer. It is possible that manuscript information survives in the Royal family's papers. Equally James Pope Hennessy's biography might cover Queen Mary's interest in art.

A close-up image of the signature is attached.

We need a hi-res image for the lower right. I'm not an expert on the Queen's taste. There must be an answer in the Royal Collection Archives. As shot in the dark - I'd say its in the manner of Gerard Chowne?

Here's the signature from your image, with adjusted contrast and saturation. And I thought my handwriting bad!

In the manner of Chowne seems to close to the mark, but this is not by him . I do not recognise the signature

Works by Chowne are in Scottish private collections. So his work might have influenced young Scottish still life painters.

I realise no one has actually said this is by Chowne, but his work was more academic, tighter and more precise.

please see attached for a photograph of the back of the painting. Unfortunately there isn't much information!

The newspaper report from 1923 states that TWO oil paintings of flowers were donated by Queen Mary. Only this discussions painting of flowers can be seen on artuk. Regrettably none of the reports give an artist's name. The answer would seem to lie in the letter from Countess Strathmore.

What happened to the other painting?

Thank you, Black Watch - even at this resolution the framer's label is helpful. It is that of J(ohn) Bryce Smith Ltd at 117 Hampstead Rd - they were artists's suppliers as well as framemakers, and the NPG's directories of both (https://bit.ly/2UY73yw & https://bit.ly/2UBsJeY) say that the particular form of the firm's name dates from 1921 or 1922. This is consistent with the NW1 (as opposed to just NW) postal district, which began in 1917 - I have a number of portraits by Strang 1905-11 that have quite similar labels, but which date from before the change.

So unless the Royal family used Bryce Smith for framing, which I doubt, the discussion's painting seems quite likely to have been framed by the firm for the artist, and only a year or two before Queen Mary's gift. This does indeed suggest he was London-based, and active at the beginning of the 1920s. A number of artists who used Bryce Smith for framing and/or materials are mentioned in the NPG directories.

Sorry, that's not quite clear. I meant that the particular form of the firm's name *began* in 1922/late '21 - it continued until they closed in the 1960s. And on reflection, the chamfered panel (mahogany, I think) on which this is painted - it's not on canvas, as described - looks older than the early '20s; I suspect the frame is significantly later than the painting.

According to the Perthshire Advertiser of the 13th June 1923, one of the paintings presented by the Countess of Strathmore on behalf of Queen Mary was sold during the fundraising activities of the Pound Day and garden fete held at the Black Watch Memorial Home. It possibly still adorns a wall in the home of some local benefactor.

Thanks Kieran, that solves that little subplot!

The only name I thought I could discern is Hattemore...he was London-based.

Archibald Hattemore certainly painted flowers. Are any of his early pictures known today? In the early 1920s he was attending art classes at the Bethnal Green Men's Institute art classes . Did Queen Mary visit the Institute on one of her East London official visits? He became a member of the East London Group on which David Buckman wrote a very useful book not so long ago
Wolverhampton Art Gallery owns his 'Anemones' which Muirhead Bone presented to the Contemporary Art Society in 1941. It did not reach Wolverhampton until 1956. It is not impossible if that was painted several years later than the Black Watch picture, that the painting under discussion is by the same artist , when his style had developed

The earliest dated one I can see is this still life of 1929 on Art UK: https://bit.ly/2GHmK31. I find it very hard to believe that our painting, with its painterly freedom and economy of brushwork, and sophisticated touches in its handling of light, could have come from the same hand six or more years earlier. To my eye Hattemore's handling of light and shade is by comparison crude and unconvincing, even allowing for the possibility that he'd chosen to go off in a different artistic direction - and is it likely he'd have been painting on a mahogany panel? I can't, to be honest, see his name in the signature either.

I do not disagree with you, Osmund. What I wrote above hardly supports this suggestion.

Forgive me, Andy, for adding my own slightly tweaked version of the signature close-up in the intro attachment - I think you may have played around with it a little *too* much for clarity in yours, and I feel it's better seen without quite so much enlargement. And I'm not sure, pace Kenneth, that an even higher res would improve things either: as Andy implies, the legibility problem lies with the artist's blobby brush-writing, not the image of it.

It is hard to believe that the painter of this work would be someone of slight significance, given the context of the association of the Countess of Strathmore with the Black Watch.

Cecilia Cavendish-Bentinck married Claude Bowes-Lyon, 14th Earl of Strathmore and Kinghorne, on the 16th July 1881 and subsequently, between 1882 and 1902, had ten children. Their sixth child was Captain the Hon. Fergus Bowes-Lyon, who, at the age of 26, on the 27th September 1915, as a soldier in the 8th Battalion of the Black Watch, died in France in the early part of the Battle of Loos (25th September to the 8th October 1915). Claude and Cecelia's ninth child, Lady Elizabeth Angela Marguerite Bowes-Lyon (4th August 1900 - 30th March 2002) was the mother ("The Queen Mother") of the present Queen Elizabeth II.

In December 1919, newspapers in Scotland, and in particular in Dundee, carried reports that a Black Watch Memorial Home was to be established in the latter city's suburb of Broughty Ferry. In March 1920, Dunalastair House, in that suburb, was acquired, and King George was rumoured to be expected to open the home that summer. Successful fundraising for the home carried on throughout the remains Spring months. However, by January 1921, the home had not yet been opened, though by June of that year a matron and staff had been appointed and it appears that the home was ready by August. The attached newspaper notice, from the Fife Free Press, & Kirkcaldy Guardian, of Saturday 27 August 1921, gives a detailed account of the home's purpose. The first official Garden Fete was held at the home in September 1921.

Cecilia, Countess of Strathmore, was, by May 1921, President of the Black Watch Memorial, possibly in acknowledgement of the fact that her son Fergus had been a member of the regiment and had died serving with it in 1915. All of the above is to suggest that it is unlikely, given that deep personal connection, that the two gifts from Queen Mary, through the Countess, to the home in 1923, would have been by inconsequential artists.

Could the signature perhaps be read as W. H. Lizars? https://artuk.org/discover/artists/lizars-william-home-17881859

Lizars (1788-1859) appears to have been a minor genre painter, and this picture is a fairly good still life that looks like later work.

Can we get a close-up of Lizars' signature, from a work known to be his?

This is somewhat reminiscent of an early Scottish Colourist still life, but the signature does not seem to match any of their names.

Perhaps we must not put too much upon the Queen Mary connection.

Royals make hundreds — even thousands — of presentations in the course of their lives. Certainly every item cannot be the stellar work of a great master.

Likely, the queen had little to no input in the selection of this gift and may have hardly even glanced at it.

It could be that the Queen had little or no interest or involvement but the Countess, as former President of the Black Watch Memorial, might have had good reason to present a painting by an artist of reasonable merit, especially given her own emotional connection to the regiment, an in particular if the intention was to gift an item that could have raised some decent funds for the home. She would surely not have sourced any old tosh for this generous gesture.

I don't think anyone is suggesting that this painting is "any old tosh" - it is self-evidently not, but a charming little work by an artist of skill and experience. But if what you meant by "a painter ... of slight significance" being an unlikely candidate is that it must be by someone most of us would have heard of, then I tend to agree with John's implication that it need not be - especially if, as I suspect, it's by a C19th artist, and very possibly not a British one.

Can I further suggest Kate Wylie: https://www.artuk.org/discover/artists/wylie-kate-18771941, assuming the top part of the signature has been somehow abraded. A very rough Photoshopped suggestion of how the signature could link up is attached

Except that through an online search for works by Kate Wylie her signature is shown to be distinctively clear and to my own eyes bears no resemblance to that as painted on this discusion's work.

I'm afraid I agree with Kieran that this cannot be Kate Wylie's signature.

Is it possible that the signature is spurious or not what we think it is? Isn't it too red, not to say garish, in comparison with the picture proper? Shouldn't it be black or brown?

This small still-life has produced an interesting debate that inevitably zero-ed in on the indecipherable signature. All were agreed that Queen Mary would not donate a work that was amateurish or without value, to what was a charitable event. It is indeed possible that a work by a Scottish artist was specifically chosen – given where the event was taking place. As Osmund and others pointed out, the handling displays some considerable sophistication. Indeed, the picture has charm – but clearly any suggestion of a possible author must make sense of the inscription, bottom right. Would a light surface clean help to separate the signature from its background?
In that absence of further suggestions, this discussion should be drawn to a close.

Thank you, Kenneth. I've asked the collection to comment on your suggestion of a light cleaning before we close this as unresolved.

Title
Pink Flowers in a Vase

Description
Presented by HM The Queen to The Black Watch Memorial Home, Remembrance Day 1923, this painting was part of a gift to the Museum upon the closure of the Home (in Broughty Ferry, Dundee) in 1988.