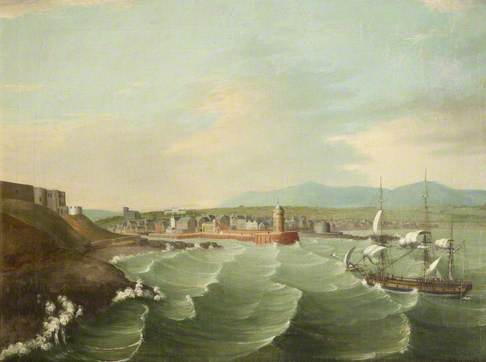 This painting of Douglas Bay, Isle of Man, is thought to depict a small merchant ship of the type generally called a West Indiaman, entering Douglas Bay. It has been suggested that the ship dates from the 1790s, rather than the c.1810 date given on Your Paintings. Would anyone have any ideas about the artist or if there are other examples by the hand known which might have a name attached?

Another painting in the Manx National Heritage collection is almost certainly by the same artist: https://artuk.org/discover/artworks/peel-castle-150012

This discussion is now closed. We have not been able to identify the artist, but the title (previously ‘Douglas’) now indicates that we are looking at a ship taking in sail in Douglas Bay below Fort Anne, c.1810.

Looking at the strength and direction of the wind, I do not think that this vessel is going to make the safety of the harbour. It looks more likely to strand on the shore beneath the old fort. So is the artist trying to depict a famous incident which happened just outside the mouth of the harbour? Any Manx historians out there?

That's an interesting idea, but rather difficult to conclude: the ship is good enough but its an unusually aerial viewpoint for Salmon, the sea is untypical of him and his work tends to be denser in detail and colour. However, the Your Paintings tally shows at least 'attributed' images -eg the Lancaster views- similar in painting manner, albeit perhaps those are by another north-western area 'circle of' hand -which is about as close as we are at the moment. (The italian views now online from the Thyssen collection in Madrid also show how variable and colourful he became: the fact they have one of Greenock which ties up with another pre-existing variant shows they really do seem to be by him, though one world seriously question it from the two of Palermo and Venice alone , despite the 'R.S' signatures.)

I have not done a careful comparison of Salmon's early work 1795-1810, but here are a few paintings of heavy seas for comparison...

Scroll down to Salmon's painting of Whitehaven Harbor...
http://partleton.co.uk/EdwardC1710in1730.htm

Scroll down to Salmon's painting of Shipwreck...
https://sites.google.com/site/antebellumartsliterature/the-arts/robert-salmon

Douglas's Red Pier, shown prominently in this painting, was not completed until 1793, so the work cannot date from any earlier year. Also, the building on the ridge to the left of the scene would not appear to be the heavily crennelated Fort Anne, which was built between 1796 and 1798 by Thomas Whaley and his mistress Maria Courtenay. Additionally, the small white circular and crennelated building at the top of the slope might also be an important architectural feature that could help date the work. By narrowing the date range from 1793 to 1798, perhaps the moment depicted can be better interpreted.

Correction to the above. The Red Pier was commenced in 1793, and was officially opened in 1801, dating the painting to after this year. Perpahs the buildings on the ridge are Fort Anne after all, but re-crennelation. Or perhaps an Isle of Man expert can identify them as a different edifice.

Re-crennelation, above, should read pre-crennelation. Also, in 1811 a ship named 'Felicity', from Whitehaven (Captain Steele) sailed from thence to Douglas on Sunday 24th January and was "put on shore the same night, at the entrance of Douglas harbour. A great part of the cargo (we hear) is saved and the vessel is got within the pier" (Cumberland Pacquet, Tuesday 5th February 1811). I am sure that there are many instances of ships having difficulties at the mouth of Douglas harbour, but perhaps the painting depicts this event as it ties in rather closely with the suggested date of c1810.

The Merseyside Maritime Museum has marine works by a so-called "Liverpool Gothic Scroll Artist" and a "Liverpool Ribbon Artist," somewhat akin to Elizabethan portraits by the so-called "Master of the Countess of Warwick." I propose that one alternative is to call the painter of this picture and the stylistically similar one of Peel Castle in the same collection the "Manx Coast Ripple Artist," in view of the very prominent rippling of the waves in both.

I should have said "in view of the very distinctive rippling of the waves in both." Generally speaking, whenever it is reasonably possible, the designation "unknown artist" should be avoided because that is an extremely large and unwieldy category on Art UK, which tends to bog down or interfere with searching.

Interesting thought, and in principle no different to long practice regarding a great deal of Renaissance work identified as 'Master of the [whichever] altarpiece' etc, albeit dropped from the 16th century on for attributions by city, regional or national 'school'.
However, it is only likely to be applied locally for specific cases such as those you cite at Liverpool, unless or until it spreads by such example to be seen as of wider utility: tendencies to conservatism (and easy ridicule) aside, it's not something anyone could impose 'top-down' as a general system. 'Conventions' generally aren't: they develop from coalesence of common practice over time. If any public holding follows the Liverpool example (for whatever class of image) it will eventually appear on Art UK, so we'll have to wait and see.

Manx Heritage launched this discussion in November 2015, to try and identify the artist of this painting, by whom they probably have another example of Peel, IoM. Ten comments up to January 2020 have included a suggestion of Robert Salmon, which I do not find convincing, and confirmed the approximate current dating of about 1810 based on completion of the ‘red pier’ at Douglas in that year. The curious course of the ship has prompted suggestion that there might be a connection with the grounding of the ‘Felicity’ below St Anne’s Fort (left) in January 1811, but this may just be a coincidence. That subject would normally show the ship aground: the one shown is taking in sail and without obvious signs of emergency, albeit very close to the beach. It has also been noted that the fort may be shown before being crenellated. The suggestion that calling the hand the ‘Manx Ripple Artist’, based on Liverpool precedents of the same sort, from the distinctive sea here and in the Peel painting is a matter for the collection to consider. A more informatively useful title would be ‘Douglas, about 1810, with a ship taking in sail below St Anne’s Fort’ -or something on those lines. We are not making convincing headway on an artist however, so subject to whatever comment the collection may have on these points I recommend we close the discussion.

Pieter, thank you. Our usual collection contact is on maternity leave until October, but other staff will be working from 2nd March.

The information has been re-submitted to another member of the curatorial team. An automatic reply says that they will return to work on 30th March.

Title
Douglas Bay, about 1810, with a Ship Taking in Sail below Fort Anne