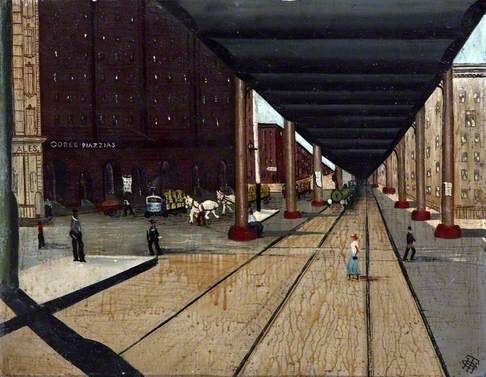 This is signed in monogram bottom right with the letters TCH (attached). The Goree Piazzas were on the Dock Road in Liverpool and associated with the slave trade in folklore, although they were not built until after slavery was outlawed in Britain. The Liverpool Overhead railway only opened in 1893 and was demolished in 1957. The Goree Piazzas were demolished between 1948 and 1950. The possibility that this was painted by an American not a British artist cannot be ruled out.

In my monogram book it is the monogram of TH Coates who flourished around 1890 when he must have been pretty crude, but seems to have improved immensely by the time he painted your picture, The monogram is the same and it is signed in full.

Thomas Heywood Coats- links us to David Saywell's suggestion of the Sitter at Paisley Museum ,holding the Glasgow Herald.

The thread manufacturer Thomas Heywood Coats was born on the 23rd October 1889 and died at Leverholme, Nitshill, Glasgow, on the 20th December 1958. During WWI he was a Lieutenant in the 2nd Life Guards Machine Gun Regiment and on his medal card his 1917 address was given as Skelmorlie Castle, Ayrshire, and subsequently as the above-mentioned Nitshill address.

In the 1939 Register, as a divorcee, he was recorded as being, on that day, at the Adelphi Hotel, Liverpool. He is buried at the Woodside Cemetery and Crematorium, Paisley, Renfrewshire:

Is there any reason to suppose that this member of the Scottish landed and industrial class is the same as the painter of this rather naive picture, especially when his monogram signature above spells his surname as Coates and not Coats.

Additionally, to be flourishing around 1890 means he was one year old when doing so, a remarkable achievement for even the most talented of artists.

The steam wagon hints at a date of about 1910-20 ish,I think. And someone called Thomas Heywood Coats is probably a member of the Coats Cotton family.-Family names.-And that just links a bit to other things on Art Detectives.

I refer to the steam wagon/lorry ,middle left.

Except that here, if Peter's monogram attachment is correct, the artist is T. H. Coates (with an E) and therefore not necessarily related to the Coats (without an E) cotton family at all.

I think the names are just a coincidence. The Coats name was just a suggested line of enquiry on the other thread - nothing has so far indicated any connection though to the family.

Ah well-just a coincidence then.

David - I'm sure you are right that this is just a coincidence. The person to settle this matter is likely to be Prof Frances Fowle as she has written on the Coats thread manufacturer/art collecting dynasty at Paisley.

Taking the Paisley/Coats diversion as the red-herring it appears to be,
that the location shown is stated as Liverpool and the quality 'primitive' it seems a reasonable guess that T.H. Coates lived thereabouts. Other examples or local press/directory mentions might support (or not) if known, and must have been seen -if long ago- by Peter to have noted the monogram.

Is it known how and when the painting came into the Atkinson's collection?

Unfortunately not. The painting has a temporary number and there are no details of the donor

Many thanks for the prompt reply; much appreciated.

Returning to Peter's original suggestion of the artist being T.H. Coates, active c.1890, based on the monogram within his book, is there agreement on such a change being recommended?

Yes: no one has produced anything more from other forms of local record as I suggested a year ago, so best to conclude as you suggest.
(The fact that Peter Nahum picked him up for his monogram listing is fortunate: I wonder what from, though perhaps unfair to ask at this distance in time.)

My guess is that the artist T.H. Coates is the Thomas Henry Coates who was born in 1866 and passed away in Southport in 1962. There are a lot of Thomas Coates recirds on Ancestry but he is the most likely person – he was a chemist and optician.

Can this work be dated? Louis suggested 1910-20. Everyone wears a hat. The woman seems to have bare arms. Is the light blue truck from the 1920s? Is it possible to get a better image of it? My composite is based on a 1929 work by Albert Ernest Brockbank.
https://artuk.org/discover/artworks/back-goree-98205

Marcie, since you seems to have direct access to Ancestry, if might be worth looking (if not already done) for your 'chemist and optician' Coates in the late 19th-c./ early 20th c. census returns: some required a head of household signature that might compare with that recorded by Pater Nahum.

Unfortunately, I haven’t been able to find Thomas Henry Coates, or his wife Ellen (née Fearnside)(b. 1872)(m. June 18, 1895, in Todmorden) on the 1911 Census, which shows the signature of the head of the household. Ellen was the daughter of a police superintendent. In 1901 Thomas and Ellen lived in Worksop, Nottinghamshire. His parents were William, a joiner, and Eliza (née Mason). His 1901 Census entry is attached. If anyone has any ideas, I can look up people on Ancestry.

Here, hopefully, is the attachment.

While T.H. Coates signed the Census form and the monogram is printed, there are still some similarities in the letters.

The 1921 Census is not helpful - T.H. Coates was a visitor in “Wimbledon, Kingston, Surrey”, so did not sign the form.

The monogram signature is reasonable justification for concluding the painting is apparently by the T.H. Coates recorded by Peter Nahum as doing 'shipping' c.1890, but I don't think we can go further than that. A Thomas Henry Coates who appears to have spent his life mainly inland as a pharmacist and only died on the Lancashire coast does not look a good fit without better evidence.