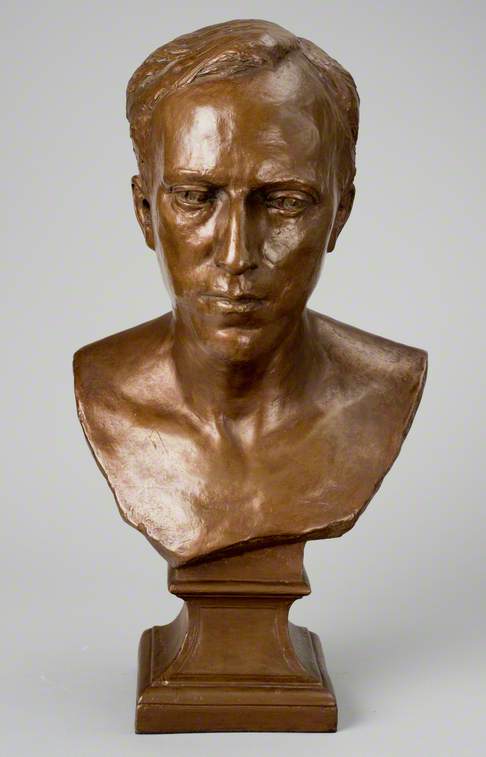 Could anyone identify the partially illegible signature on this bust of Cecil Sharp? The inscription possibly contains ‘Rou’ and seems to end in ‘…lling’, but may not be all one name.

According to the acquisition note, this is thought to have been commissioned in the mid-1960s. However the date could read 1905, which was in Sharp’s lifetime.

Cecil Sharp is credited with having saved English folk songs and country dancing from near-extinction in the early 20th century. Before he wrote down around 1600 lyrics, that oral tradition was in danger of being lost forever.

Is it certain that the date on this work is 1965? As Andrew has suggested, it does look more like 1905, the year in which, that December, at the age of 46, he retired from his nine-year term of office as Principal of the Hampstead Conservatoire. His age in this work looks more like a man in his 40s. The bust could have been commissioned to commemorate that tenure.

And it is a lovely thing that his name can be abbreviated to "C. Sharp"!

There appears to be another bust of Sharp in the same collection: https://artuk.org/discover/artworks/cecil-sharp-18591924-249018

Is there a photo of the signature? What is the medium?
It looks like bronzed plaster or something soft. The style looks more 60s than turn of the century.

Mr Hurman...
If you click on ArtUK, It'll open the entry on the main website.
There are 9 images of the bust. The signature can be seen on there.

Taking another look, could the partial signature be E Ros... ....llins? If so, that might be Edwin Roscoe Mullins.
http://www.victorianweb.org/sculpture/mullins/index.html
https://sculpture.gla.ac.uk/view/person.php?id=msib2_1208189148

Michael, the link E Jones is referring to is at the top right of this page, and labelled 'Open on Art UK'.

From what is bleeding through the worn white paint on the other one, it looks to be made of zinc, spelter (Zinc-lead alloy) or aluminium. Spelter was commonly used for copies & reproductions, mainly mass-produced, in the 19th & early 20th, but is seldom met with much later. Cast aluminium is unlikely as a material before WWI; but it did have a minor vogue between the wars - it's still sometimes used today. Without more certainty about what both casts are made of one can't say any more - it should at least be possible to scratch an unseen part of our sculpture to see if it is resin, which would lead us to a later date. In any case, either or both could be later casts of an original still held by the family or elsewhere.

That looks like a very good call to me, Andrew - I certainly thought it read '...llins'.

There was also a personal connection between Sharp and Mullins, as both men were founding members, in 1897, of the King Alfred School Society's Council, from which Sharp had resigned by 1901.

The National Archives also holds a letter from Mullins to Sharp, dated the 15th September 1906, which might reveal some details of this work.

Finally, as proof positive that this work is probably by Mullins, the Morning Post of Monday 02 April 1906, there was a page 5 review of the "Show Sunday" for that year's forthcoming Royal Academy exhibition, that day being "when artists other than members of the Royal Academy throw open their studios and give their friends a private view of the work executed during the past year." At the very end of a long article they report that "Mr. E. Roscoe Mullins showed three works for the Academy, a life-sized figure representing "Man and His Burden", a portrait statuette, and a bust of Mr. Cecil J. Sharp."

These works never made it to the 1906 RA exhibition, possibly due to the failing health of Mullins who died, just nine months later, on, as mentioned above, the 9th January 1907.

Attached is the relevant clipping from the above-mentioned Morning Post.

What may have happened in the 1960s is the making of the two casts, presumably from an original somewhere else. However, I wonder if the collection took the inscribed date for 1965 (which may be incorrect) and then assumed the casts would have been commissioned around that time. In other words, does the collection have any other record or evidence apart from the casts themselves?

Excellent stuff, Kieran - I'd also just found the 1906 letter and was about to post...I'm glad I checked back before doing so.

The only thing I think must be wrong is your earlier idea that the bust could have been commissioned to commemorate the end of his time as Principal of the Hampstead Conservatoire. As the DNB (and Wikipedia) relate, in July 1905 Sharp "... resigned from the Hampstead Conservatoire after a prolonged dispute about payment and his right to take on students for extra tuition." This resignation cost him a house and income he could ill afford to lose, and was one of several. Sharp was strongly opinionated and quarrelsome in temperament, "quick to take offence and difficult to placate" - the less helpful flipside of his extraordinary dedication and tenacity.

If it is resin, the colouring is more likely to be from bronze powder in the mix than paint on top. Sometimes the metal powder/resin is a just an outer layer, with plain resin beneath. This so-called 'cold-cast bronze' is a common modern low-cost way of reproducing bronzes. The little scrape (e.g. a nail file) in an invisible place previously suggested would show white for painted plaster, bright metal for true bronze, and little change for resin/bronze powder. True bronze is also much heavier, but cold-cast works are of often weighted.

Actually looking more carefully at the images, the "...& painted bronze" part of the description I queried in my first post above may refer to the plinth only, which does look as if it could be plaster painted in a bronzy colour.

Osmund, I think the whole piece is painted the same colour. For both busts, the collection should try to clarify the material used.

I'm not sure I agree, Jacinto, but it *is* very confusing. My guess (but it's only that) is that the main (top) part is resin with bronze powder ('cold-cast bronze'), the plinth is painted plaster, and that the paint on the latter has been brought up over some of the top part to try and blend the two together. That would also account for the mixed message in the description. We'll have to wait and see. Also see this image of (I think) the same bust in a very different, somewhat kinder light: https://bit.ly/2kDfkXL. If it isn't the same one, then it may be a/the bronze original somewhere else...but after long examination I think it is the same.

The Sep 1906 letter from Roscoe Mullins to Sharp is actually in the Vaughan Williams Memorial Library collection of Sharp correspondence (rather than the Nat. Archives). Unfortunately there's nothing in it about the bust, though it's clear they were acquainted (but not close friends) - see https://bit.ly/2lJaTLa.

An example of Mullins' signature style, as E. Roscoe Mullins, which fits in with that on this Discussion's work, can be seen in the second image on this Bonhams lot:

Another version is attached.

Thank you E Jones and Osmund for directing me to the link. Clearly my first attempt to join a discussion. I have collected bronze 19th c animalier sculpture for some 30 years, but my knowledge of 20th c is limited. However I do know that if it were a bronze copy and the sizes compared they would differ due to what is called shrinkage. From what I have read we don't have that luxury.
If it is and it seems likely, a copy in plaster, then the original signature would show up but slightly degraded which would explain both the names and date matching the original, just the medium and colour finish perhaps being different.

Welcome, Michael. Coincidentally my knowledge of resin casts originated with a copy of a C19th animalier bronze that I bought in my innocent youth - the finish was pretty good, the weight was right (some lead inside), and I knew nothing of ring, coolness to the touch or anything else. I only realized I'd been sold a pup (well, actually a recumbent adult dog) when I banged it on the edge of the car boot and its nose flew off. Useful, though, as it enabled me to see a cross-section of how it was composed - mainly plain resin, with an outer layer mixed with bronze powder that was buffed up to give the gleam of worn metal. Here is a guide to how to make one in three different ways - I don't think there's any shrinkage with rubber moulds & resin: https://bit.ly/2lLcTCC

I should emphasize that if our work is indeed a resin type (in whole or part), that doesn't mean there is any attempt to deceive. From the 1960s or so it has just been a lower-cost way of commissioning an accurate and decent-looking copy of an existing plaster or bronze. I think the other one in the collection was probably an earlier copy cast in cheaper metal with rather less satisfactory results.

I think we need to know the medium for sure. Plaster and bronzed resin are two very different things, can be easily identified and would help in dating the bust, as resin only became regularly used by sculptors in the 1960s. It was both more realistically like bronze, and far less vulnerable than plaster. The bust itself is very unlikely to be a work of the 1960s, though it is possible that it is an after cast made in the 1960s, hence the importance of the medium. If it were an after cast in either plaster or resin then there has to be a bronze version from which the mould for the cast was taken. Can the Society provide any more detail as to medium and provenance?

I have just had a very helpful conversation with the Librarian at the collection. He confirmed, by examining them while I waited, that this discussion's bust is lightweight, hollow and probably resin, while the variant is made of plaster.

I found that our nominated contact has since left, so it was suggested that I should make contact with the Library and Archives Director, who would be best placed to help us.

Many thanks to Alex at the Vaughan Williams Memorial Library for the attached images of its two busts of Cecil Sharp. She commented that the plaster bust is marginally heavier and very slightly taller.

The first two images on the list above suggest the plaster version is not only fractionally taller but generally larger than the resin copy in the same slight proportion.

Assuming the original clay was used to make a bronze that was subject to 'shrinkage' (mentioned by Michael, but more explanation would be useful), does this reasonably prove that such a bronze must have been the original for the resin cast?

Put another way, is there any other reasonable explanation for the differences of scale between the plaster and resin versions (and the rather sharper geometry of the integral socle in the latter) if no bronze was ever made?

The answer is probably 'no': i.e. unless resin is also subject to 'shrinkage', I can't see how the resin version could be a copy made from either the present (or perhaps another) plaster, but perhaps others have a more informed view.