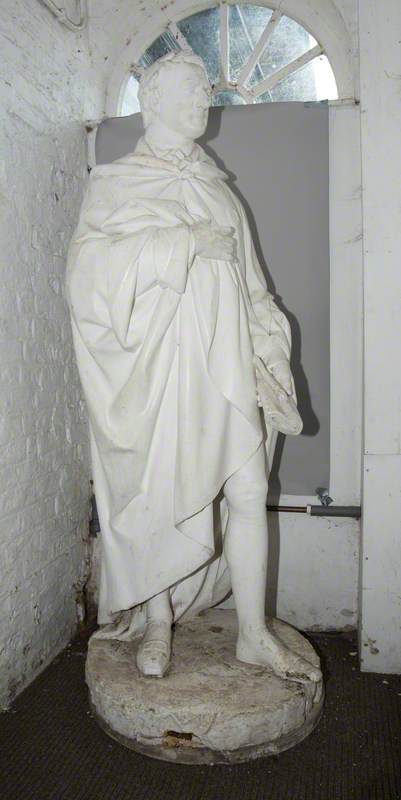 This sculpture of Metternich, one of the architects of modern Europe at the Congress of Vienna, is now in storage at Preston Park Museum, but the collection has no information on it and no record of how it was acquired.

https://bit.ly/2SfVqwN
https://bit.ly/2NkBJD3
These photos show the statue in its former home at Wynyard Hall. The house was inherited by Frances Anne Vane Tempest, whose marriage in 1819 to Charles Stewart (afterwards Charles Vane, as he took his wife’s name) marked the beginning of a long Londonderry connection with Wynyard, which ended with its sale in 1987 to property developer Sir John Hall (the current owner). A programme of renovation was undertaken in the 1980s.

Charles’s half-brother Robert Stewart, Lord Castlereagh, was, as Foreign Secretary (1812–1822), closely involved with Metternich in negotiating peace in Europe at Paris and Vienna, which surely explains the presence of the latter’s statue at Wynyard. A bust of Metternich, unrelated to this full-length portrait, still stands in the house. The attached photograph was kindly supplied by the staff at Wynyard Hall.

Metternich was in exile in England (1848–1851), between the ages of 76 and 81. Blue plaques record that he lived at 44 Eaton Square, London SW1 in 1848 and later at 42 Brunswick Terrace, Hove. This sculpture appears to show him as younger man than he would have been at that time.

In any case, this title could be updated to include the sitter’s full name and dates.

This discussion is now closed. It was discovered that the sitter was not Klemens von Metternich (1773–1859), but Robert Stewart, Viscount Castlereagh and 2nd Marquess of Londonderry (1769–1822). The plaster cast is related to the commemorative marble statue of Castlereagh by John Evan Thomas (1810–1873) in Westminster Abbey. The direct provenance to Wynyard suggests it may well be the studio plaster, cast directly from the sculptor’s clay, rather than an after-cast from the marble.

Thank you to everyone who contributed to the discussion. To anyone viewing it for the first time, please see below for all the comments that led to this conclusion.

This is actually not Metternich at all, but Lord Castlereagh himself. It is a copy of John Evan Thomas's posthumous marble statue erected in Westminster Abbey in 1850. See https://bit.ly/2SS2PYo

I should really say 'cast', not copy - it was probably done under the supervision of the artist, and the lack of definition (particularly noticeable in his Garter star - see https://bit.ly/2XgSgfM) likely to be the result of a coat or coats of paint over the plaster.

Thank you, Osmund! You have not only given us the artist, but also solved a case of mistaken identity!

This is listed as a plaster cast on Art UK.

There is surprisingly little mention of this work in online sources, though a footnote here confirms it was his younger brother the 3rd Lord Londonderry who commissioned (or "procured") the original marble: https://bit.ly/2Nlaus4. It does not seem to have been exhibited, and is not mentioned on the 'Mapping Sculpture' website (https://bit.ly/2VdBSuQ).

However the BNA once again comes up trumps with the attached story from the Illustrated London News, which tells us that it had "just been completed" in mid-June 1849; it was erected in the Abbey exactly a year later, as other newspaper reports from 8th June onwards detail.

A new Sculpture Group will be added soon, led by Katharine Eustace, our current group leader for 'Portraits: British 20th C'. Until the new group goes onto the website, I will add the few sculpture discussions to Katharine's group so that she can see them all.

This may be the plaster for Thomas' statue according to Timothy Stevens, who I believe, wrote the ODNB biography the sculpture
There may well be material relating to it at Mount Stuart, now a National Trust property in Ulster, where much Castlereagh memorabilia can be found.

This is the comment in the ODNB entry on the sculptor John Evan Thomas, 1810-73 (by Mark L Evans rather than Timothy Stevens):

'In 1844 he exhibited at Westminster Hall his model for the statue of the second marquess of Londonderry, which was executed in marble and erected in Westminster Abbey in 1850. It received a mixed response, being described by the Literary Gazette as 'without dignity in the head and without dignity in the attitude', while the Art Union considered that it had 'very considerable merit' (both cited in Gunnis, 390).'

I agree with Osmund that it is more likely to be a rather heavily painted cast than a plaster model, but the issue of identity of both subject and artist has been resolved, so this could be ticked off. Pity to have lost Metternich who always calls to mind the stary told of the elderly Palmerston, who when asked the answer to the celebrated 'Schleswig-Holstein question' (the Brexit-type conundrum of its age) is reported to have answered that only three people ever knew, ' Prince Metternich, who is dead: a German professor, who went mad; and myself - and I can't remember!'

Pieter, Timothy provided the information for Mark and I helped Timothy over some points

This was a classic case of mistaken identity that so often grows out of family mythology, but now we can correct the error and close the book. Before we do, here is a summation of the research.

It was Osmund Bullock who immediately recognised the sitter not as Klemens von Metternich (1773–1859) as was the traditional attribution, but as Robert Stewart, Viscount Castlereagh and Marquess of Londonderry (1769–1822). As Osmund also pointed out the plaster cast is related to the commemorative marble standing figure in Westminster Abbey by John Evan Thomas (1810–1873). ‘A Biographical Dictionary of Sculptors in Britain 1660-1850’ gives an early date for the exhibition of a model in Westminster Hall of 1844, which suggests a collective move to posthumously commemorate the architect of post-Napoleonic Europe. The marble was completed in 1849 and erected in Westminster Abbey the following year. The retrospective commemoration may have been occasioned by the fact that Castlereagh had committed suicide in 1822, and was perhaps encouraged by the presence of Metternich, exiled in London from 1848–1851.

Thanks to Osmund for cracking it, and to Martin Hopkinson and Pieter van der Merwe for adding colour and interest.

There are a few further technical points of interest: one is that it was the plaster models, casts taken from the sculptor’s clay, that were most frequently displayed at exhibition, notably in the RA exhibitions. Another is that plaster was both more permanent than unfired clay, and easier to move than marble or bronze, while the sculptor did not have to invest money and time in those until he had a commission to do so. Timothy Stevens suggests that the plaster at Preston Park Museum, with a direct provenance to Wynyard, may well be the studio plaster, and not an after-cast from the marble. This is an important distinction, for, like the studio plasters from Chantrey’s studio presented to the University of Oxford by his widow in 1842, the studio plaster after the clay is the nearest thing we have to the work, a mano, by the sculptor.

Finally, John Evan Thomas trained under Sir Francis Chantrey and may well have been acquainted with the sitter through Chantrey’s drawing from the life (National Portrait Gallery, (NPG 316a (13,14)) and the plaster that remained in the studio (Ashmolean Museum, (NBP689)), from which a number of marble versions were later derived.

Sir Thomas Lawrence, who painted Castlereagh several times, wrote on his death to Elizabeth, Duchess of Devonshire in Rome to say that when the Marquess’s pistols had been removed, he used a penknife ‘with almost surgical Accuracy… Thus perished the victim of sudden [?] despondency A Man of the Highest Courage – of the Most even Cheerful Temper the most undaunted Firmness. Perhaps the ablest practical Statesman in Europe – the most popular that ever yet had to calm the irritations of contending cabinets, and to make his Presence among them a common benefit and Pleasure’ (Lawrence Correspondence, Royal Academy Archives, (Law/4/47)).

Description
A plaster cast of Robert Stewart, Viscount Castlereagh and 2nd Marquess of Londonderry. The original is situated over his grave in Westminster Abbey.