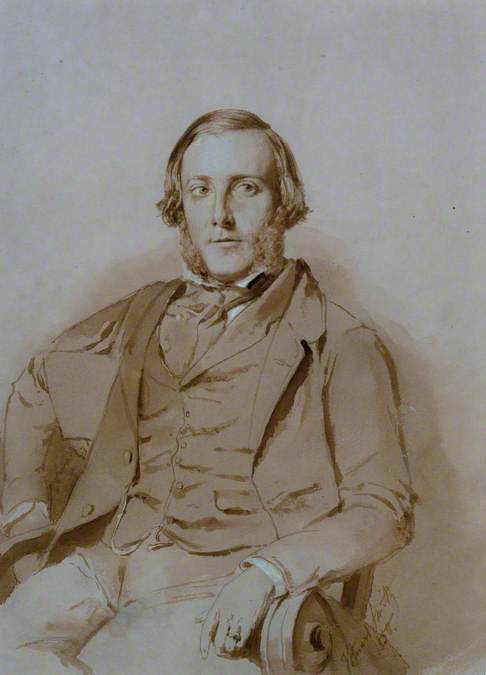 Who was John Trimnell? Was he known to Thomas Stuart Smith from Italy or London? Further information would be welcome.

This discussion is now closed. It has been established that Smith and Trimnell were school friends, and that this portrait was painted in 1850, during a short period where the artist stayed with the sitter after the former's return from Italy in 1849. Much more is known about John Trimnell, including his life dates, family, profession and place of work. The middle name of the sitter's son was probably in honour of the artist. A digest of this information has been incorporated into the artwork description.

Thank you to everyone who contributed to the discussion, especially Osmund Bullock who provided most of the biographical details. To anyone viewing this discussion for the first time, please see below for all the comments that led to this conclusion.

The work appears to be dated 1850, although a confirmation of that by a higher resolution image or detail would be helpful.

See the Forth Historian online. They were school friends. Smith stayed with Trimnell in London in 1849 on his return from Italy.

Trimnell could readily be researched further, starting with the census.

The record has an estimated birth date of 1817 and lists London as a residence.

It would be interesting to see the letters mentioned in The Forth's text if they are in your collection. They may hold clues. As would any materials that were written for the 1989 exhibition since The Forth Naturalist and Historian doesn't provide any citations.

confirmed as 1850. This matches with Smith returning to the UK about that time as the war in Italy was making it difficult to survive as a artist. We do not know where the two men met although it is possible they were together at school in France. We believe Smith was abroad for most of the period from young child to 1850.

The letters only mention Trimnell as a friend. The material from the exhibition is no longer here as it was only picture labels and nothing published at the time other than the fnh article. We do not know where Smith was at school other than it being France. His father died in the Caribbean when Smith was young but with help from his Uncle he was able to stay at school and eventually taught art and survived through portrait painting. It is possible that he actually was at school in London but we have no evidence of that.

The man Gina found must be the right John Trimnell (there are no others of the name in London at the right period); and though his life is fairly accessible through the usual records, it was in truth a pretty unexciting one.

John was born in London, but baptised (on 8th Oct 1815) at Dartford, Kent, the home town of his father, Edward Trimnell (b.1788), then living in Wardour Street, Soho. Edward was an office clerk/accountant who in the early 1820s went into business with a man called Charles Smith (probably unrelated to our artist) as Smith & Trimnell of Piccadilly, gold-lace makers and embroiderers. That partnership broke up in 1834, and Edward moved to Regent Street where he sold worsted fringes (& carpets); and then finally (by the late 1840s) he was in the fur business, in partnership with his son John and his son-in-law William John Back, as Back & Trimnell of Regent St. Other close branches of the family were in the Church and (especially) Medicine.

In 1851 our sitter John Trimnell was living "above the shop" in Regent St with his younger sister Louisa and her husband William, the two men also listed as 'furriers' in the Census. I'd wondered if his friend Thomas Stuart Smith would be there, too, as implied by the Forth Historian article; but if Smith did stay with his school friend Trimnell after his return from Italy, it was not for long – in 1850 (not 1849, at least according to Graves' RA Exhibitors) he exhibited the three works mentioned in the article from 24 Howland St in Marylebone (he’s mistakenly listed by Graves as "T.L.Smith"), and he was recorded as a lodger at the same address in the following year's Census.

Later in 1851 (Oct) John Trimnell married at St James, Piccadilly, Louisa Ganthony, daughter of a well-known watch and chronometer maker in the City, Richard Pinfold Ganthony; they had two children, Florence (b. Nov 1859) and Winnard Stuart (b. March 1861). John was still at Regent St (and apparently in business) in 1860, but by the next year’s Census he and his family were living in Hereford Rd, Paddington, and he describes himself as ‘Retired Furrier’. During the 1870s John & Louisa moved out to Upper Norwood (in 1871 he had resumed work as a bookkeeper); but by 1881 they had returned to live in modest, but not impoverished circumstances at St Charles Square, North Kensington. Nevertheless, despite being 65, he was apparently still finding it necessary to do accountancy work.

John Trimnell died at St Charles Sq on 28th Dec 1888, his estate valued at just £696. Unknown debts must have emerged later, however, as this was afterwards re-sworn as ‘Nil’. His son Winnard, a bank clerk in 1881 and in 1889-89 cashier at the City Bank, Aldgate, was on the electoral roll at the family home in 1890-91; but thereafter he seems to drop off the face of the earth. His mother’s 1911 Census form implies he had died before then. Florence never married, and lived with her widowed mother until the latter’s death in 1916 at the age of 93. She herself died at Chiswick in 1943.

Two further thoughts. First, it seems probable that the middle name of John's son - Stuart - was in honour of the artist, who seems likely to have been his godfather. Second, the sitter seems to wearing - most unusually for a man - what looks like an engagement ring on the appropriate finger: this would tie in with John Trimnell's marriage the following year. See enlarged detail attached.

This discussion has attracted seven comments, all dating to 2017. The question set up for discussion, “Who was John Trimnell?” is answered at length in Osmund’s post of 2 August 2017. It is proposed to recommend that this discussion is closed on the basis that it has reached a reliable conclusion. It is also proposed that Art UK amends the date of the work to 1850 to match the Stirling Smith Art Gallery’s website and the date of 1850 on the drawing itself.

Description
John Trimnell was a school friend of the artist. He was born in London, baptised in 1815, and followed his father Edward Trimnell into the fur business in the 1840s and worked with him and his brother-in-law William John Back, as Back & Trimnell of Regent Street. Smith stayed with Trimnell for a short period after the former's return from Italy in 1849; this portrait was executed during this time. John married Louisa Ganthony in 1851 and they had two children, Florence and Winnard Stuart, and the latter's middle name was probably in honour of the artist. John continued to work as a furrier until the 1860s and died in 1888.