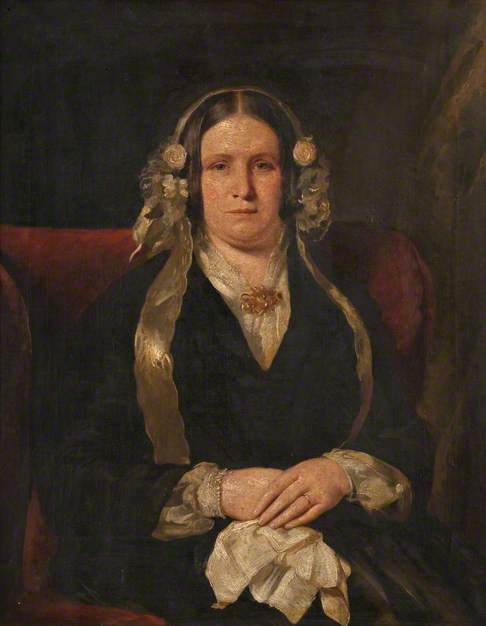 Is anything more known about this painting, either about the sitter, or the artist?

Could the sitter be one of the two (successive) wives of the prolific Scottish painter Erskine Nicol (1825-1904), painted by her husband? Judged from her hair and costume, the first wife, Janet Watson, who married Nicol in 1851 and died in 1863 would be the more likely candidate. Nicol married his second wife, Margaret Mary Wood, in 1865 and she outlived him.

judging by the 1840s coiffure, cap, ribbons and plump figure, isn't it more likely the sitter is Nichol's mother?

Lou Taylor should help to narrow down the date based on fashion.

Thanks, Jan, and I agree the sitter is more likely to be Nicol’s mother!

As so often, we are discussing a painting with insufficient information.

What is the source of the title of the picture, Mrs Nicol, given by the collection?

Is the painting unlined? A photograph of the painting in its frame would be invaluable, as would one of the frame and canvas from the reverse.

In my opinion, the painter is Heinrich von Angeli, an Austrian portrait painter (1840-1925).

Several of his works are in the British Royal Collection, including portraits of members of the British, German, and Russian royal families.[1] His work is also in the Wallace Collection[3] and the Victoria and Albert Museum.[4].”

In the first painting, note the similar facial expression and composition, the hair, the sombre colour palette, and the muddy brown background with little detail.

In the second painting, note the similar facial expression and composition, the hair, the sombre colour palette, the muddy brown background, the shape and position of the hands, and also the similarities in the white linen cloth that the women are holding.

The woman in the mystery painting wears a ribbon bonnet that is likely from an earlier era - she might not be someone who followed fashion. The painter might have prepared this painting in order to prove to someone that he could paint Queen Victoria in an appropriate manner.

My apologies, the first screenprint should be this one.

Without further input from the collection, as indicated above, I suspect that it will be extremely difficult to make progress on this discussion, "Who was Mrs Nicol, and can we work out the artist of this portrait?"

On that basis, I propose to recommend that this discussion be closed at the end of the month if further contributions, with evidence, are not forthcoming from participants, and if the collection is unable to comment on the source of the title of the picture, Mrs Nicol, and ideally provide a photograph of the reverse as suggested in my post of 8 May.

Jacob, I have followed up on an email I sent the Collection on 10 May to see if they might be able to provide some answers and images. David

Marcie, having myself been through the Art Detective proposal process for many years, may I respectfully offer the following personal and well-intended advice. Expressions of a firm opinion as to who an artist or a sitter might be are of relatively little value in these discussion, other than to hopefully point contributors in a relevant direction for further exploration. The crucial contributions to these discussion come when, at the very least, some fragments of verifiable evidence can be presented which can confirm an attribution or an identification, ones that subsequently lead to an overwhelming conclusion that is accepted by Art UK and the specific collection. Consequently, do not be disheartened if a subjectively expressed opinion is not greeted with some (or any) enthusiastic response from the community of contributors to these investigations. Finding factual proof really is the focus of most of our collective efforts and is by far the more rewarding endeavour.

Thank you for the advice, Kieran. Your comments on the various works have greatly impressed me. I do realize that I have been much too enthusiastic about searching for clues to the works. Yes, you are correct - I have sometimes been disheartened. I have appreciated the support that I have had in other discussions. It was kind of you to write.

Many thanks to Lou Taylor for emailing information on the dress (sorry, Lou, I can't find your University of Washington Library fashion plate, but the other three are linked below):

'All I can do in terms of dating the clothes in this portrait is guess...due to her age and to the longevity of style of the cap she wears. This lady is elderly with greying hair. It could be that as Marcie says, her hair style, with smooth bands over the ears, and with cap worn at the back of the head, with roses and ribbons over the ears and lace lappets hanging down, are styles once but not currently fashionable. This is a style popular all through the 1840s. I have it on fashion plates from 1841-1847 (linked below). However, her dress with rather wide sleeves, worn with white detachable undersleeves tied inside, with lace cuffs, is in a style more typical of c.1850.'