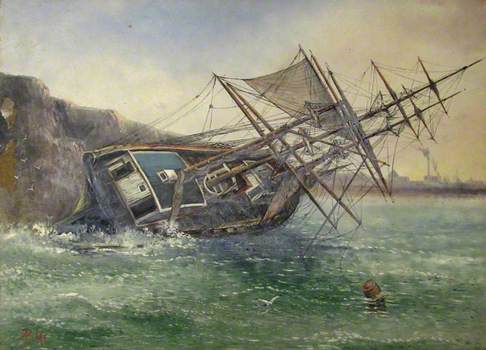 The Jernaes was wrecked at Hendon Beach on 21 October 1894. The Sunderland Volunteer Life Brigade had been called out to rescue the crew. During the rescue one Brigadesman John Leviss, was drowned; the only Brigadesman from Sunderland to lose his life in the course of duty. We did have a Ralph McDonald who was a member at this time but have very little information on him and no reason to believe he was an artist. I was not able to find out more about Ralph McDonald and would not want to put his name forward as the artist.

Could this be after a newspaper image related to the incident? It looks tolerably professional but hardly by a first-rate marine painter.

May be, but whoever did it was undoubtedly a well-practised hand. Just drawing a wrecked ship convincingly (which it is) from such an angle is a challenge in perspective, be it from a print, photo or actually -which would have to be from another vessel so perhaps less likely given the situation and that the viewpoint is quite high out of the water. First option is likely to be someone fairly local: does anyone have Marshall Hall's 'Artists of Northumbria' to hand just to see if there are any 'Mcs' there?

The ART UK entry for this painting indicates that it was donated by Mr & Mrs C.T.Dale in 1940. Information received from the collection indicates that the donor was actually Mr & Mrs T.A.Dale. Mr Dale was a marine engineer, and son of an engineer. His wife was Jennie Herring, daughter of the amateur artist John Herring (1859-1925). The painting of the wreck of the Jernaes was one of several paintings donated by the Dale family. Other pictures were by John Herring, suggesting that Mrs Dale had inherited some of her father's works. It is possible that the painting came down to the donors from either side of their respective families.

The Valley of Love,Sunderland by John Herring( Cliff Thornton above ) looks to me exactly the same style as our painting,especially the water.
As to the Monogram, I see it as R.N Co

Hmmm... I think the short line under the superposed 'c' and the fluent writing of the 'M' including the slight 'miss' as the turn of the brush left a gap top right argues for 'Mc' with Cliff's family pursuit suggestion a good one for an Ancestry hound interested to see if that trail goes anywhere.

A curiosity for Art UK about John Herring is that, for me at least, a search under that name only produces the two John Frederick Herrings - and if Cliff has correctly given his dates (1859-1925) then they ought to be added rather than the current 'active late 19th c' etc.

Based on the one example of John Herring's work on Art UK, also in this collection, I personally would not conclude this picture is by him, even apart from the signature, which is obviously not his.

Pieter suggested that the artist wa﻿s “undoubtedly a well-practised hand”. I have been reviewing the 1911 England Census on Ancestry for people in Northumberland whose first names start with “R” and whose last names start with “Mc”. One man seems to fit the bill as a man who knows about ships: Robert Fergusson McIntosh, aged 45, living with his wife Maggie McIntosh, aged 47, at 225 Wingrove Road, Newcastle upon Tyne. They were both born in Dundee, Forfarshire, Scotland, and both indicated they were “resident” there. Robert’s occupation was “naval architect - warship construction”. His signature at the bottom of that record, attached, shows the same “M” as in the painting’s signature.

A Newcastle upon Tyne electoral register listing for 1939 shows Robert Fergusson McIntosh and Margaret Ann McClean McIntosh still living at 225 Wingrove Road. A probate record shows that Robert died on March 30, 1954 in the Burnbank Nursing Home, Broughty Ferry (Dundee). An Ancestry user’s tree shows that Robert was the son of Henry Glassford Bell McIntosh and Ann Fergusson and that he was born on October 8, 1865. One of his siblings, David Fergusson McIntosh confirmed the death in the probate record.

That's an ingenious approach: the sort of evidence that might support is evidence of probably very localised/ amateur exhibition or family knowledge, neither easy to get at.

According to the National Army Museum (https://www.nam.ac.uk/explore/corps-royal-engineers):
“Corps of Royal Engineers
Formed in 1716, this corps helps keep the British Army in the field by providing engineering and technical support. Known as ‘Sappers’, Royal Engineers have served in all of the Army’s campaigns.”

Assuming that the artwork was created in late 1894, following the shipwreck, Robert would have been employed as either a “ship draughtsman” or a “naval architect” at that time.

As stated above, the 1911 England Census is useful because it shows signatures. I have attached two composites that compare the inscription on the painting with the signature box and the name portion of the Census entry. While 17 years had likely passed since the painting was prepared and Robert’s signature would have evolved, I believe there are still many similarities. Perhaps someone who is a handwriting expert can comment. For example, in both: the letters are slanted, the right arm of the R extends down, the middle cup of the “M” is the same, the lowest part of the left arm of the “M” has a heavier dot (when writing “Maggie” and when writing “McIntosh”), the right arm of the “M” extends down, the “c” is elevated, and the periods in the signature box are lined up with the bottom of the left arm of the “R”. With such a long signature, one can see why he might have shortened it on the artwork. If he had had a less common name, he might have written it in full on the artwork.

Allowing that writing with a brush in paint rather than a nib pressing on paper are different, the 'R's, especially in the upper part are not the same, but even were they more so greater evidence is needed to prove that ' R Mc' might by Robert McIntosh.

The old way of advancing this sort of thing would have been to get a photo published in a local newspaper to see if anyone had any family knowledge, or perhaps other work 'hanging around'. That might still be possible, or putting it on some local website (including a paper's, which in this case would be something like the 'Sunderland Echo'). Ideally the collection would do that, since any image used would be theirs, but it's only a suggestion.

As far as Art UK is concerned this could otherwise add to a long list of indefinitely open cases, so while it can remain active a while (say end of September), my provisional recommendation if it gets no further is that Marcie's discovery of McIntosh is recorded just as a speculative local possibility.

Right at the top here it was suggested that the painting might be based on a press image/photo: though not yet found, that's also worth remembering.

I have, as one does, become a little interested in this ship. It is obvious from the title of this description that at least one thing is wrong...Risar is actually Risør, Norway in the Arendal maritime district.

Hoping for more I have compiled a cursory few notes about her that may help the juices here and by extraordinary coincidence another version of the picture. See my notes and links attached. I do not yet know where the new picture came from but am trying to find out the source

Upon reflection, I think it may even be a photograph.

Thanks Charles: I'm sure it is a photo, from the back view of the upper half of a figure at lower left. The background 'mountains' at right mentioned in your note are a cloud illusion if you look carefully at the sea horizon line. Despite the angle being a little different it would have been possible to use this photo as partial basis for the painting if one had other sketches (or another photo) from further round to seaward.

So far no response from the archive concerning the source of their photograph.

It would presumably be more likely than not that the photographer was local to Sunderland? If so are there any important or otherwise collections of photographs in that area? It would be a good trail to follow but I am afraid I have found nothing online so far.

Title
Wreck of the Norwegian Barque 'Jernaes' of Risør, on Hendon Beach, 21 October 1894