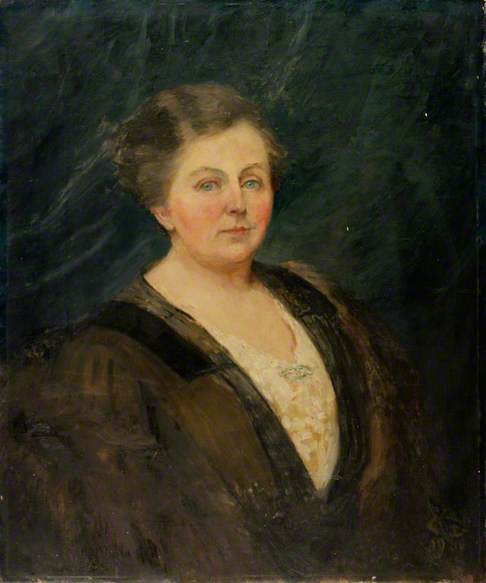 The monogram and date (1916) can be found bottom right.

The attachments are a close-up photograph of the monogram from the collection, and a detail from Art UK’s image with the levels adjusted.

Sorry, can't help you with this one - have checked my book and subsequent recordings and have no record.

This is arguably a slightly clearer tweak of the monogram - and in fact the one on the Art UK image is clearer still, but very small. It looks like it's CG / GC, or indeed CC / GG. Not, I think, a formally-trained artist, and pretty undistinguished; if amateur (s)he may be difficult to find, but there may be something in local newspapers.

Perhaps it is by a member of her family. An article from 1921 reports that some members were artistic.

It's almost too obvious to mention, and I'm sure the Collection must have considered this, but they also have portrait of David Lloyd George (the sitter's husband) of the same dimensions and also donated by the Earl of Dwyfor, their grandson, in the same year, 1992.

It's by Charles Goldsborough Anderson and signed in red. The capital A is of the rounded sort that could easily be mistaken for a G and of course monograms tend to combine or use ambiguity so a sign could stand for both. The picture is not dated but assigned c 1916 by the Collection, which seems plausible from the appearance of the sitter.

Now I can't find any examples of CGA using a monogram, never mind this one. Though his pictures aren't always signed in any way, when they are it tends to be at the top in red as with this one of DLG. But he might be someone to consider.

Incidentally both pictures (especially his) look like they might have been painted from press photographs and then possibly donated to the family.

Here's an Anderson for comparison, but signed differently:

I wonder whether this portrait could be the work of the artist Gwenny Griffiths.
Could it be a painting that was commissioned and exhibited at an exhibition and sale held at the Mendoza Galleries, Old Bond Street, London, in May of 1916?

Gwenny Griffiths was a Swansea born artist and portrait painter. She had initially trained in the Swansea School of Art before continuing her studies at the Slade School of Art and in Paris.

The sale was held with the intention of raising finances for the ‘National Fund for Welsh Troops’, for which Margaret Lloyd George was the serving committee chairman. Subscriptions, items and artwork from donors were instructed to be sent directly to Margaret Lloyd George, at 11 Downing Street.


“Miss Griffiths undertook to accept commissions for portrait paintings for the benefit of the fund. She has completed four during the last six weeks. Perhaps the best of these is an exceedingly attractive painting of Mrs Lloyd George, chairman of the Welsh National Fund Committee, which Miss Griffiths completed after very few sittings. Altogether the collection numbers about thirty. Among the sketches are two scenes around Caswell Bay.”
iii) Miss Gwenny Griffiths gives an Exhibition - Western Mail - 19 May, 1916

I don’t feel that this portrait is typical of the style of Gwenny Griffiths as an artist, but it may be more reflective of the circumstances and conditions of which the painting was produced. It would have been painted for charity, alongside other commissions, within a very short period of time with limited sittings, limited source material which as a result also dictated a number of decisions made by the artist, with no time to refine.

I feel that on close comparison to the sketch of Annie Swynnerton, many similar basic habitual drawing elements can be seen.
iv) M. Lloyd George. Swynnerton
https://artuk.org/discover/artworks/annie-l-swynnerton-18441933-243950/view_as/grid/search/keyword:gwenny/page/1

She appears to use a variety of ways to sign her paintings on ArtUK and online.

I couldn't work this out at first as GG, but presume the attached is roughly right - 2 x Gs intersecting at right angles in perspective.

Its not like Griffiths' 'G. G.' on her portrait of Octavia Howell (though that is presumably rather earlier)

...but the letter colour is the same and one can see how one form might have developed to the other.

Acquisition method
gift from the Earl of Dwyfor, 1992