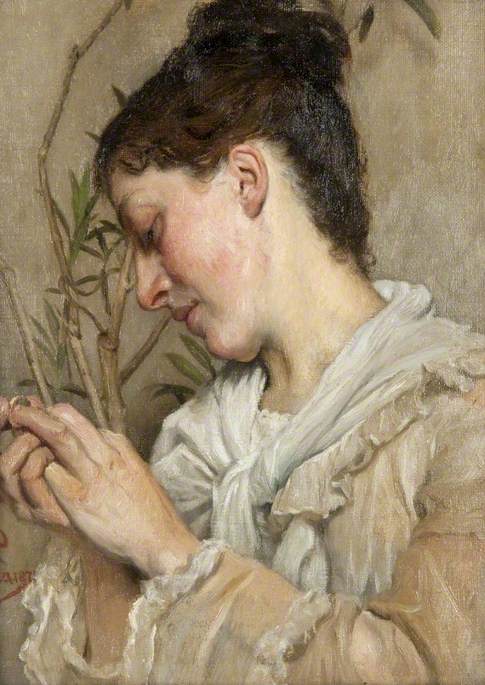 The Glasgow Herald, of Monday 4th July 1898, printed a full list of the 117 paintings bequeathed to Glasgow Corporation by Adam Teacher. The list identifies the work as being entitled 'Engaged', and as painted by 'R.P.' in 'Roma'. It might well be that at the time the monogram was mis-read. Attached is the newspaper extract.

Following the suggestion above that the monogram is CC or CCA, it might be worth exploring the possibility that the painting is by the American Artist Charles Caryl Coleman (1840-1928), who lived in Rome from the late 1860s to the mid 1880s in the Keats House. Coleman married Mary Edith Grey Alsage (?A) in 1875, the year of the painting. The branch of oleander or olive in the background is strongly reminiscent of the branches which feature prominently and habitually in Coleman's still-life paintings (e.g. Metropolitan Museum, New York, and Museum of Fine Arts, Boston). Coleman uses various monograms of his initials, and it is worth comparing Interior with Lute Player, signed in monogram and dated Roma 1875, which was sold at Heritage Auctions, New York 17 Nov 2014, lot 68156.

The monogram of Charles Caryl Coleman appears to have been three C's in a sort of triangular arrangement, two back-to-back and one upturned above them.

....but they do not look like this painting's one.

He uses more than one monogram, and certainly likes back to back C's.

Does the painting have its original frame, and if so what does it look like? This might provide a clue.

Can you please post the selection of ones of which you are aware?

On this website https://bit.ly/2MKvXhW there are 18 of his works where some sort of monogram is visible. Of those, 16 are of the ‘triple C’ variety as per the ‘Interior with Lute Player’ of 1875 (https://bit.ly/3nqlyoi).

The two that have different signature forms date from 1867 (or possibly ’69 – at ‘Paris’) & 1922, i.e. early and very late in his career. Of the 16 with the ‘triple C’, 14 have a date readable or given in the image coding, and they all lie between 1875 & 1912 (with examples from every one of the five decades). Ten of them also have a visible place-name (‘Roma’ or ‘Capri’), and it is notable that in *every* case where a place is given – Paris, Roma or Capri – it is written in upper-case letters throughout (albeit with a larger first letter), not partly in lower case like ours.

A comparison of the Lute Player’s inscription with ours is attached, and you can see there are other differences in the style. I think it unlikely that Coleman would have tried to get his wife’s maiden surname into the mix – why not her first name? – and I doubt the inscriptions/monograms are by the same artist. To be sure, though, it would be good to find some paintings by Coleman signed and dated 1870-74 – like Kieran, I'm having trouble seeing a ‘5’ as the last digit of the date in ours.

My current feeling is that Martin’s reading is the most likely, and that we should be looking for a name in the grouping RP–PR–PP–RR.

I am wondering if this might read “C. R.” and be an early work by the Italian artist Claudio Rinaldi (1852 - after 1909). He seems to always sign in bright red, uses that diagonal slash, often adds the full year, and often adds the location “Firenze” (Florence).

He would have visited Rome in 1875. Wikipedia notes the following: “During 1874-1875, he was awarded a scholarship by the Institute of Fine Arts of Urbino to study at the Academy of Fine Arts of Florence.”

The first composite compares the olive (?) branches from the Art UK work to the ones from “Merrymaking” (from the Artnet website). https://tinyurl.com/puewa329

The second composite compares the signatures on those two works. I realize the “R” is not the same, and the signature on “Merrymaking” is not backwards.