Institutions may also submit questions about works in their care. Please do not submit requests for advice on valuations or unrelated artworks. 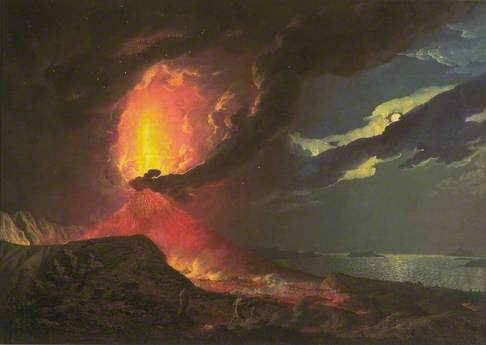 Vesuvius in Eruption, with a View over the Islands in the Bay of Naples, Joseph Wright of Derby (1734–1797), Tate

Title
Vesuvius in Eruption, with a View over the Islands in the Bay of Naples

Medium and Support
Oil on canvas

Acquisition method
Purchased with assistance from the National Heritage Memorial Fund, the Art Fund, Friends of the Tate Gallery, and Mr John Ritblat 1990

Joseph Wright toured Italy for the first and only time between 1773 and 1775 but drew on the experience for the rest of his career. In particular his imagination was gripped by the power of Mount Vesuvius, dominating the Bay of Naples and the surrounding area. He stayed in Naples from early October to early November 1774, too early to witness the eruption of Mount Vesuvius in 1777, and yet during his lifetime he painted over 30 views of the exploding volcano. It is of course possible that he experienced something close to an eruption while staying in Naples, since, according to Sir William Hamilton, the mountain had for many years 'never been free from smoke, nor ever many months without throwing up red-hot SCORIAE … usually followed by a current of liquid Lava' (quoted in Egerton 1991, p.166).

This picture appears to have been painted soon after Wright's return to England, with the aid of studies made on the spot. Wright has created a dramatic composition, taken from the foothills of Vesuvius, looking towards Sorrento and the island of Capri. The inclusion of the islands of Ischia and Procida, neither of which would be visible in reality, emphasises the tranquillity of the sea in contrast to the violence of the volcano. The white hot jet of molten liquid hurled up from the heart of the volcano is framed by dense black clouds, and a further wreath of smoke streams out across the bay, not quite obscuring a brilliant full moon. Wright explores his passion for chiaroscuro effects to the full, contrasting the red hot lava pouring down the sides of the mountain with the darkening sky and surrounding landscape. Scarcely visible in the sombre foreground, two men, followed by a mourning figure, carry the lifeless body of one of the volcano's victims. Wright may have intended the group to represent the death of the elder Pliny in the great eruption of Vesuvius in AD 79. The relative insignificance of the figures in comparison to the power of the volcano adds a human element to the composition and stresses man's insignificance before the sublime grandeur of nature.