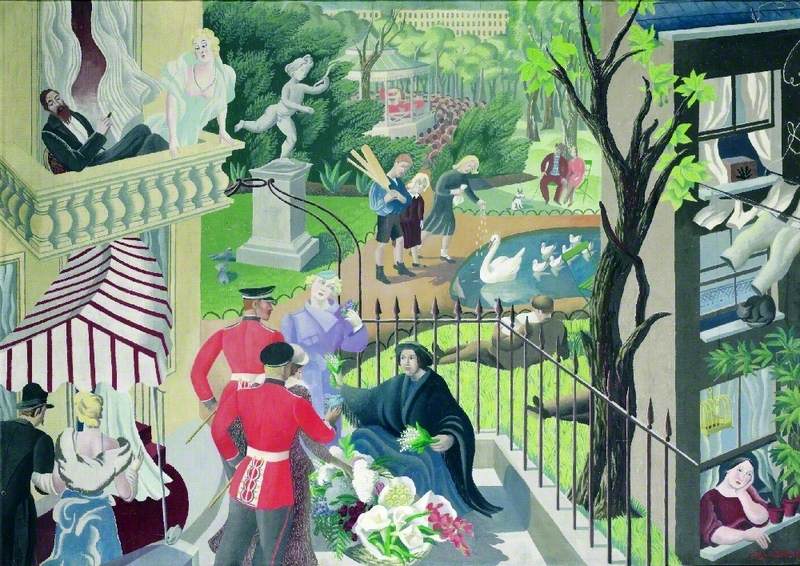 Artist, decorator, painter of murals and illustrator, born in London, her father an architect and good watercolourist, Stanley Adshead. For several years from 1921 attended Slade School of Fine Art, in 1924 being chosen by Henry Tonks to undertake a mural commission with Rex Whistler, a fellow-student, which led to several more commissions, including murals for Bank underground station, London. In 1929 married the artist and writer Stephen Bone.

Read more
Following year had a one-man show at Goupil Gallery, also exhibiting at NEAC, RA, SWA and elsewhere. Retrospective at Sally Hunter Fine Art, 1986. Among other work completed by Mary Adshead from the early 1930s was a series of drawings and watercolours of Crystal Palace; London Underground posters; wall panels to decorate the restaurant of the British Pavilion at the 1937 Paris International Exhibition; stamp designs for the General Post Office in 1949; and the decoration of Selfridges’ restaurant, in 1950, with jungle murals. In 1962 her growing interest in mosaic led her to study in Ravenna and Sicily and to take a course in Italian techniques at Kingston School of Art. A tireless worker whose illustrations and wall paintings contain much wit and charm. Graves Art Gallery, Sheffield, owns her 1931 self-portrait. That was included in a show of Adshead’s work touring from the University of Liverpool Art Gallery in 2005. Lived in London but travelled constantly, even into her eighties.