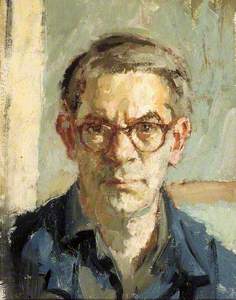 British painter, born in Teddington, Middlesex. He studied at the Byam *Shaw School of Art, 1939, and the *Slade School, 1939–41. His work is ‘mostly to do with figures in interiors: nudes particularly, but also musical subjects, scenes in galleries and so on; a few portraits; also townscapes, mostly Italian, and the odd landscape. I have always liked the French-English tradition of the 19th/20th century (pre-Cubist)…and have never felt a need to do anything different.
Read more
The combination of everyday charm and solid painting—finding the colour and the pattern by observation—seems to me inexhaustible.’ He has had numerous one-man shows, notably a series at Roland, Browse & Delbanco (see Browse) between 1952 and 1972, and he has exhibited regularly at the *Royal Academy since 1945. He has also written instructional manuals, such as Learning to Paint (1970). In Jeffrey Archer's novel Not a Penny More, Not a Penny Less (1976), the villain, Harvey Metcalfe, is an admirer of Dunstan's work: ‘Harvey made a special point of looking at the Bernard Dunstans in the [Royal Academy Summer] Exhibition. Of course, they were all sold. Dunstan was one of the artists whose pictures always sold in the first minutes of the opening day.’