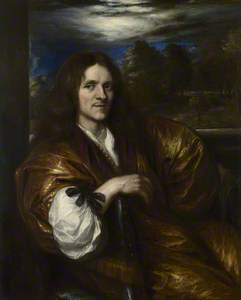 (b Leiden, 24 Oct. 1607; d Amsterdam, 4 June 1674). Dutch painter and printmaker. He was extremely precocious, and after training in Amsterdam with Lastman he is said to have begun practising independently in Leiden when he was barely into his teens. From c.1625 to 1631/2 he worked in close collaboration and friendly rivalry with Rembrandt. They shared the same models (and probably a studio) and contemporaries sometimes had difficulty distinguishing between their hands (a few works are still disputed between them).
Read more
The diplomat and connoisseur Constantijn Huygens visited them in 1629 and thought they showed equal promise of greatness. He wrote that Rembrandt surpassed Lievens in vivacity of expression, but that Lievens was superior in ‘a certain grandeur of invention and boldness of subjects and forms’. That this was not excessive praise is borne out by Lievens's marvellously melodramatic Raising of Lazarus (1631, Brighton Mus. and AG), in which the only parts of Lazarus shown are his arms emerging from the tomb. After the paths of the two young artists separated in 1631/2, however, Lievens did not sustain his early brilliance, although in his later years he was more successful than Rembrandt in worldly terms. In 1632–5 he visited England, then from 1635 to 1644 he lived in Antwerp, where he adopted a more elegant and facile style, influenced by van Dyck, that brought him a good deal of work as a fashionable portraitist. In 1644 he returned to the Netherlands and was based in Amsterdam for the rest of his life, although he made visits to other Dutch cities and to Germany. It is not known whether he had any contact with his old friend Rembrandt when both were living in Amsterdam. In addition to his work as a painter, Lievens was a skilled etcher and also made some woodcuts.