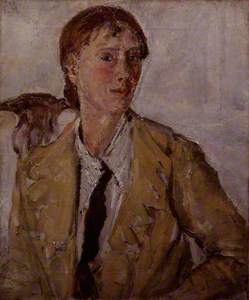 (Born Edinburgh, 9 June 1861; died London, 2 March 1951). British painter and occasional sculptor. In 1900 she became the first woman member of the New English Art Club and it was there that she mainly exhibited, building a reputation as one of the outstanding British women artists of her period. She painted portraits, flower pieces, interiors, and seascapes in an attractive Impressionist style, but her most individual works are large decorative compositions inspired by her vision of a Golden Age.
Read more
They show the influence of French Symbolist painting as well as her interest in philosophy and religion (The Zone of Hate, 1914–15, and The Zone of Love, c.1930–2; both Tate, London).