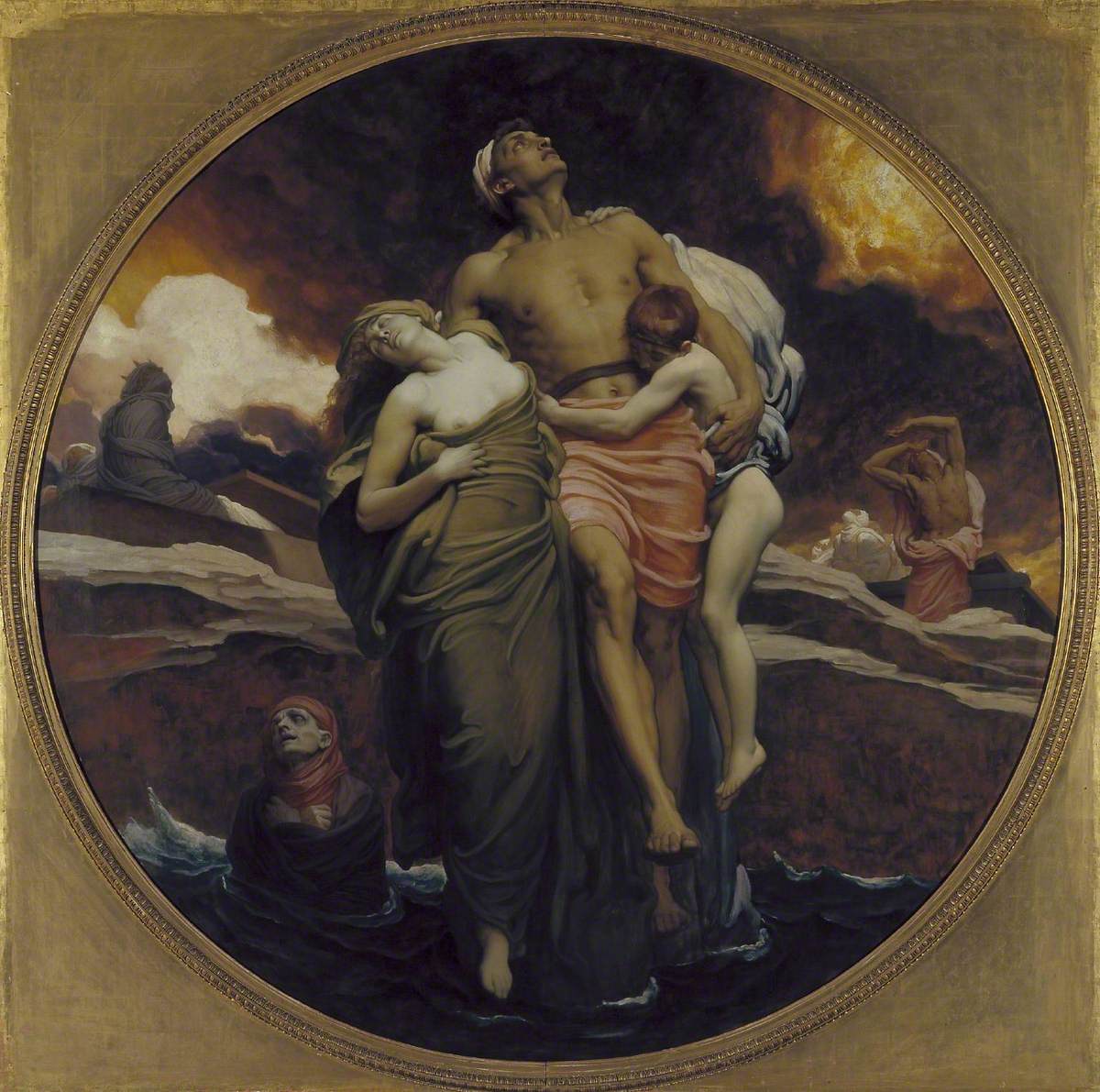 This is one of the most dramatic and powerful works, painted in the dark and solemn style of Leighton's late career. It was originally designed as one of eight roundels on the theme of the Apocalypse, intended to decorate the spandrels of the dome of St Paul's Cathedral in London. The scheme was initiated by Alfred Stevens but was abandoned when the original design was rejected as 'unsuitable for a Christian church' (quoted in Wilton & Upstone, p.

Read more
260). The present, reduced, version was commissioned by Henry Tate, for his new gallery of British art. Leighton's tondo shows the resurrection of the dead, as described in the Book of Revelation: 'And the sea gave up the dead which were in it; and death and hell delivered up the dead which were in them: and they were judged every man according to their works.' (Revelation 20:13) It is a terrifying yet essentially optimistic image, meditating on the theme of spiritual salvation. The central group depicts a man, woman and child in various stages of 'awakening': 'The man is alive, his pulses are beating again, his flesh is reddening. His wife wears the greenish ghastly hue of death: his boy is breathing, but still pale and only half alive' (Edgcumbe Staley, quoted in Wilton & Upstone, p.259). All around them, the dead arise from newly-opened graves, some exposing their bodies to the light, others wrapped, mummy-like, in pale shrouds. A trail of cloud bisects the canvas and separates the lower realms of the dead from the spiritual upper realm of the living. Leighton uses colour symbolically, contrasting the grey pallor of the dead or half-living with the brilliance and renewed vigour of the risen. A debt to Delacroix is clear in the fluid brushwork of the preparatory oil sketch (Leighton House Museum and Art Gallery). The finished work, on the other hand, calls to mind Eugène Delacroix's contemporary, Théodore Géricault and especially his 'Raft of the Medusa' from 1819 (Louvre, Paris). The influence of Michelangelo is evident in both the Géricault and Leighton paintings, in their monumental scale and their preoccupation with human anatomy. More specifically, the pose of the figure in the right background of Leighton's picture and the shrouds of the resurrected are clearly inspired by Michelangelo's 'Entombment', which entered the National Gallery's collection in 1868, and which Leighton greatly admired. 'And the Sea … ' was Leighton's favourite design, but met with only moderate approval. One critic commented that the picture had 'a cold - almost oppressive - dignity', but also that it displayed 'perhaps better than any other the loftiness of his thought, the high-water mark of his mental conception'(Magazine of Art, 1892, p.220). Further reading: Stephen Jones, Christopher Newall, Leonée Ormond, Richard Ormond, Benedict Read, 'Frederic Leighton 1830–1896', exhibition catalogue, Royal Academy of Arts, London 1996, pp.230–232, no.116, reproduced p.230, in colour. Andrew Wilton and Robert Upstone, 'The Age of Rossetti, Burne-Jones & Watts: Symbolism in Britain 1860-1910', exhibition catalogue, Tate Gallery, London 1997, pp.259–260, no 120, reproduced p.259, in colour. Frances Fowle December 2000