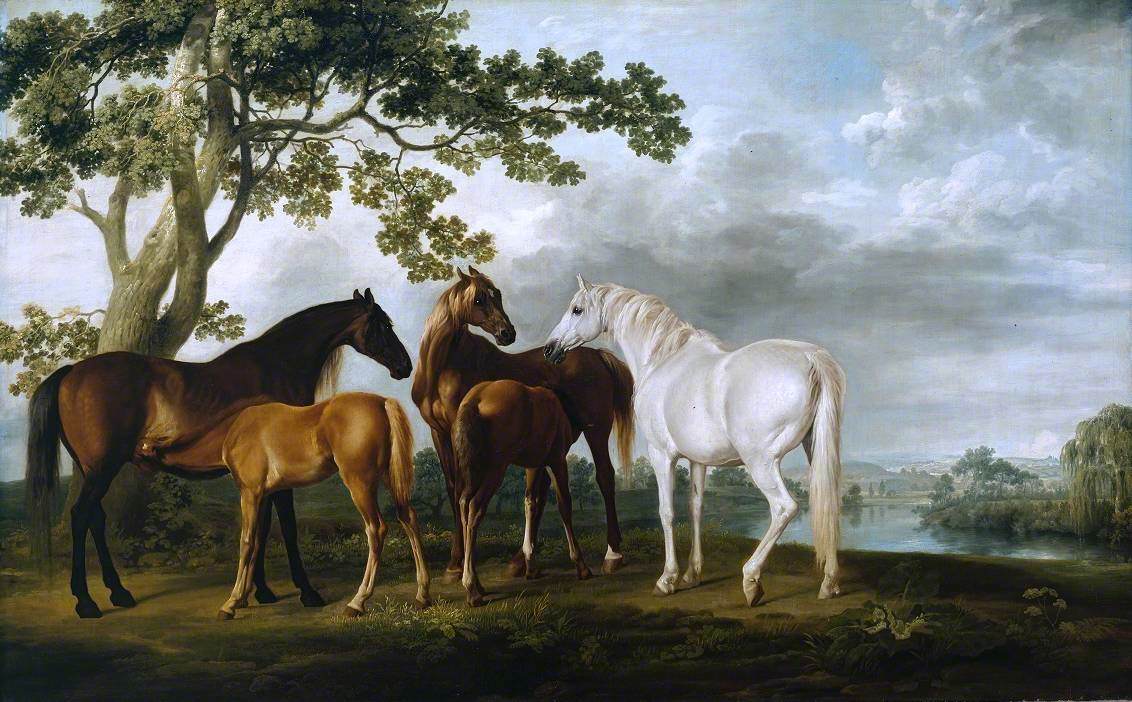 'Mares and Foals in a River Landscape' belongs to a group of paintings of the subject, produced mainly between 1760 and 1769. Painted for various aristocratic patrons, they are accurate portraits of specific mares famous either for their racing success or as the dams of successful racehorses. The naturalism of these works derives from Stubbs's careful observation of living animals and also from his anatomical studies of horses for 'The Anatomy of the Horse', published in 1766.

Read more
'Mares and Foals in a River Landscape' was largely adapted from 'Mares and Foals without a Background', c.1762 (collection Trustees of the Rt. Hon. Olive, Countess Fitzwilliam's Chattels Settlement), but with the omission of the two central mares from that picture, and the modification of the colour and pose of the far right horse. The original idea for the frieze-like arrangement of the early mares and foals paintings may have been suggested by engravings by Matham after Collaert and others, which show animals as if on a stage in the foreground, against generalised backgrounds. For most of his mares and foals subjects Stubbs almost certainly drew the animals from life, perhaps first making numerous studies and then carefully arranging them into an ideal composition; however, no such studies have been located. It is known from an unfinished picture in the series that the artist first painted the horses in perfect detail, stretching them across a blank background like the figures in a classical frieze, before carefully inserting the (probably imaginary) landscape into the background. The resulting complex compositional structure demonstrates Stubbs's knowledge of classical principles, gained on a trip to Italy in 1754, as well as his sense of pattern and rhythm. 'Mares and Foals in a River Landscape' utilises a classical composition which gives an overall symmetry and balance to the group, in which the three mares and their foals are placed so as roughly to form a cone, with their rumps marking the perimeter and their heads the apex. The feeding foals are essential to the composition, allowing the spectator's eye to be drawn over the whole group in a slow revolving rhythm. Stubbs exhibited a number of mares and foals pictures at the Society of Artists and the Royal Academy in the 1760s and 1770s, providing an opportunity for patrons to commission such works to include their own animals. It would not have been unusual, given Stubbs's large output in the 1760s, for him to borrow from an earlier composition, but it is remarkable that the patron who commissioned this picture (possibly Viscount Midleton) does not seem to have had any horses of his own portrayed. Possibly he liked the subject, but did not possess any brood mares. Further reading: Basil Taylor, 'Stubbs', London 1971, pp.206–207, reproduced pl.24 Judy Egerton, 'George Stubbs 1724–1806', exhibition catalogue, Tate Gallery, London 1984, reprinted 1996, pp.125–131, reproduced p.127 in colour Terry Riggs January 1998

Purchased with assistance from The Pilgrim Trust 1959