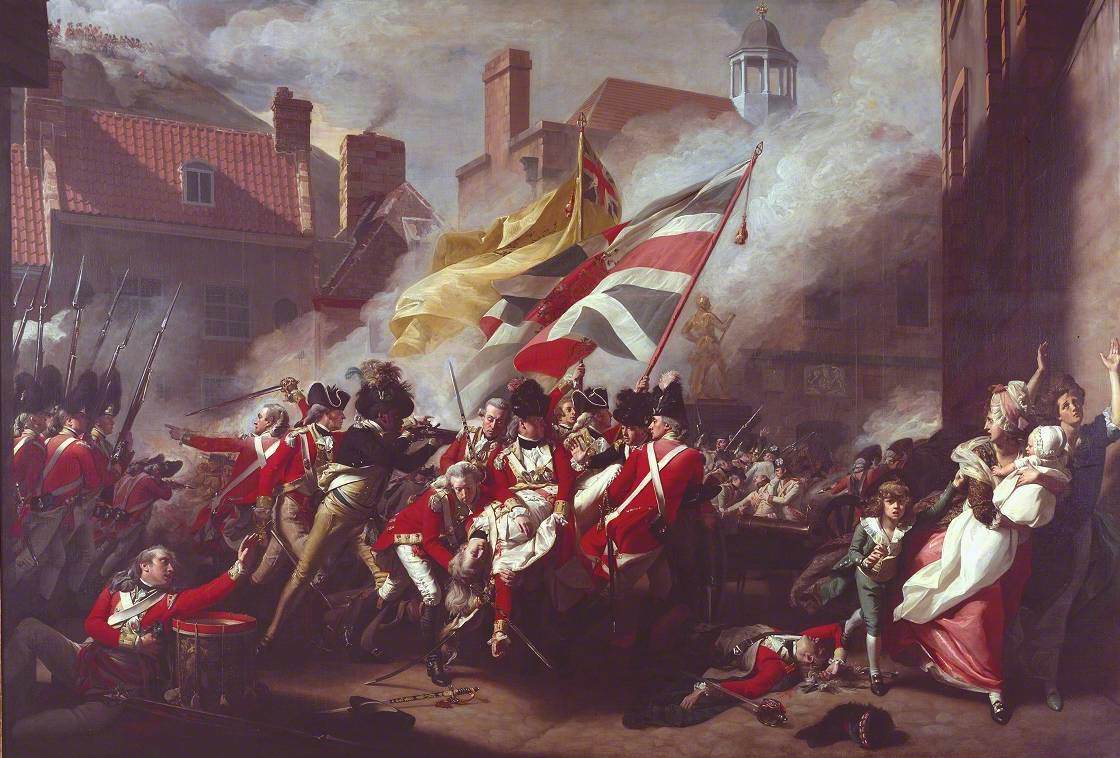 This picture celebrates the British defence of Jersey against French invasion in 1781 and also pays tribute to a young Major, Francis Peirson, who lost his life in the process. Originally a part of France, the island of Jersey had been in the possession of the English since 1066. On the night of 5–6 January 1781 a small army of French soldiers landed on the island and marched on the capital, St Helier.

Read more
They captured the Governor, Moses Corbet, and forced him to sign a document of surrender. However, the British garrison and the Jersey militia launched a counter-attack, led by Major Peirson, during the course of which Peirson was killed by a French sniper. Almost immediately, Peirson's black servant, Pompey, turned on the sniper and shot him dead. A battle ensued in Royal Square and the French were defeated. At a time when defeat in the American colonies was imminent, news of the British victory in Jersey was greeted with alacrity in England. John Boydell, a successful engraver and printseller, immediately commissioned this picture from Copley, who had already made his reputation with 'The Collapse of the Earl of Chatham in the House of Lords' (1779–1781, Tate N00100). The theme of the modern noble hero expiring at the scene of battle was established by Benjamin West, who, like Copley, was American by birth. Copley increased the drama of the event by making the moment of Peirson's death coincide with the British victory over the French, rather than earlier in the battle. The picture is full of movement and colour, but is also carefully orchestrated. Peirson's body in the centre of the picture offers a splash of white against the red of the soldiers' jackets, and appears to topple forward out of the painting. The group of men who support him, like figures in a Deposition, are crowned by the Union Jack, a symbol of Britain's victory. To their left, the black servant, Pompey, has just shot the French sniper in the background. To the right of the picture, a terrified family (modelled on Copley's own wife, family nurse and children), attempt to flee from the scene. Many of the officers in the painting are said to be accurate portraits and Pompey was modelled by the black servant of the auctioneer James Christie. The setting for the picture is also carefully depicted, looking towards Royal Square along what is now Peirson Place, with the statue of George II in the background. When the picture was first exhibited publicly in May 1784, crowds of people came to see it and, according to one critic, 'the chorus of praise reached all the way to Buckingham Palace' (quoted in Wilson, p.35). Further reading: Jules David Prown, 'J. S. Copley – In England 1774–1815', Cambridge, Massachusetts, 1966, pp.302–310, reproduced no.442. Richard Saunders, 'Genius and Glory – J. S. Copley's The Death of Major Peirson', The American Art Journal, vol. 22, no.3, 1990. Simon Wilson, 'Tate Gallery: An Illustrated Companion', Tate Gallery, London 1990, p.35, reproduced p.35, in colour. Frances Fowle December 2000