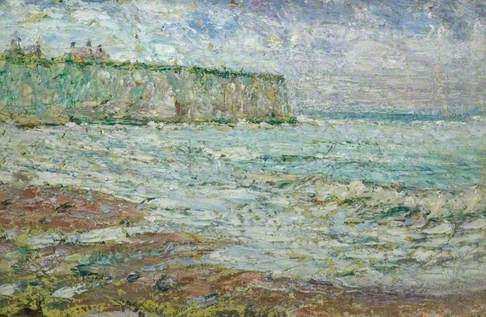 This is a view of the North Foreland, Thanet taken from the beach at Stone Bay, just north of Broadstairs Harbour. Having just walked along the beach at Stone Bay and around the estate above the cliff, I do not think that the house is North Foreland Manor which is further from the cliff, but a smaller house in late 'Arts and Crafts' style, of which there are several there.

The Collection has commented: ‘Unfortunately we have no information about the location shown in this painting. Joseph Syddall often didn’t even give a name to his paintings. We think that the person who commented is possibly right in identifying this. It would be nice to see if other people agree.’

There is an interesting article, which may be found online, about Joseph Syddall by Janet Murphy, published by The Friends of Bushey Museum. What I gleaned from it is that this Chesterfield artist moved to Hampstead in 1920 to live with his friend, Annea Spong, whom he had met while a student at Bushey. As may be seen from the details of the Syddall collection at Chesterfield Museum & Art Gallery the paintings were bequeathed by her. My conjecture is that the painting under discussion is likely to be from 1920 or later, given the proximity of Broadstairs to North London. I think it would help this discussion if another local resident of Thanet could assist in the verification of the North Foreland location of this painting.

The North Foreland Estate was in the process of development . The beach starts just north of Broadstairs Harbour and Buchan's famous 39 Steps are at the far end of Stone Bay.
The lighthouse cannot be seen as it is some way from the cliffs

Geograph has several photos from a similar viewpoint, of which the clearest is https://www.geograph.org.uk/browser/#!/grid_reference+"TR4068"/image=2705617

The painting might be based on sketches from various parts of the beach. It is hard to imagine seeing - from the same place at the same time - the beach rocks being exposed while the tide is right up to the cliffs and the house that close to the headland.

Malcolm, as ever the AD software seem to be struggling with a slightly complex link - your original doesn't have any brackets (the usual isse), but perhaps it doesn't like the per cent symbols, who knows? Use the Bitly workaround, as I suggest people do for all their links: https://bit.ly/2REK8YP

Description
Joseph Syddall came from the village of Old Whittington, near Chesterfield, and studied at Hubert von Herkomer's art school in Bushey. He was responsible for a number of illustrations which appeared in 'Tess of the D'Urbervilles' in 'Graphic Magazine' in the 1890s. His work was also displayed at the Royal Academy between 1898 and 1910. Syddall produced a number of works in pastel, watercolour and pencil as well as oil.