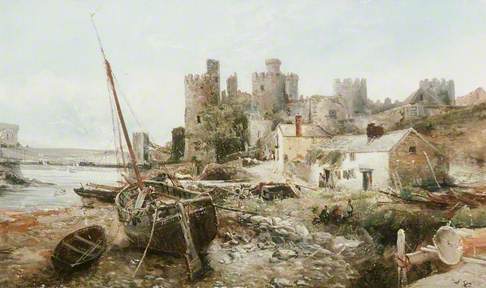 Are any of them a likely candidate for this one? Are some of these the same artist? [Group leader: Andrew Greg]

The Collection has commented: ‘There is still a bit of mystery surrounding the painting. We went up to our stores to check the original, and a label on the back of the frame quotes the date of 1876 (see attachment). This places the date 20 years after the artist's death. Of course this label could be wrongly dated by a previous owner of the painting. We have also checked our accession ledger for September 1980 (the date of purchase) and it also states that the creation date is 1876. So perhaps as Andrew suggests, this may be by another artist of the same name. We also send you a close up of the writing on the front lower right of the painting. This gives the title 'Conway Castle, NW (North Wales) and the name of the artist. Two letters follow his name (S or J and a C??). Perhaps these could help in finding the correct William Webb. The painting was purchased at a Sotheby Parke Bernet auction in September of 1980, and we can only hazard a guess, that the information on our catalogue re: artist, was gleaned from the sale catalogue.’

It is by William Edward Webb

Peter, that is what I wondered at first, then it made me question 1876 as the date of work, given William Edward Webb was born in 1862. What are your thoughts on the date of work as a result? Thanks, David

I would agree with Peter Nahum that it is William Edward Webb, and has many features typical of both subject and style.

Thomas Telford built a chain suspension bridge over the Conway River by the Castle around 1829. Later a railway bridge was built alongside. The details in the painting are not too clear but while I can not see the Telford suspension bridge I can not see the 2nd bridge crossing the Conway, built by Stephenson, which was completed and opened in 1849.

The artist’s name in capital letters is also on this work (on the boat in the lower right corner). Click the image for a detailed view.
https://www.bonhams.com/auctions/18922/lot/48/

The Conway tubular bridge was commenced in 1846 and was finished, as mentioned above, in 1849. In the attached composite the dominant presence of its barbican-style pylons at either end, with their crenellated turrets, arrow slits and bartizans, can be seen in the righthand side print. In the image of the painting, the lefthand side pylon can clearly be seen (and is circled in red). What appears to be a muddied grey sea and horizon line behind the suspension bridge is actually the side wall of the tubular railway bridge. The painting must date, therefore, at its earliest, from 1846.

If the date on the back of the frame of 1876 is correct, then the work could not be by the William Edward Webb who was born in 1862, as he would have been 14 when he painted it (which is not impossible but is highly unlikely). The painting could, of course, date from a later year.

It might also be noted that the writing of the artist's name on the side of the frame contains a second, middle initial, which is, alas, obscured by some paint or damage. Could this be an "E"?