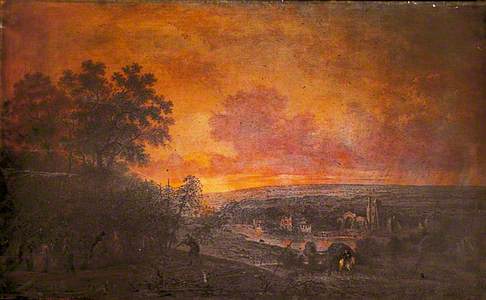 What more can be established about this artist, represented only by this landscape on Art UK?

This discussion is now closed. The artist J. J. Gegan (active 1844–1860) is now known to be James John Gegan and his dates established as 1821–1889. Pieter van der Merwe’s new artist biography will now be reviewed with the Editorial team and then incorporated on to the Art UK site.

Art Detective Volunteer Al Brown has added: ‘There seem to be several online records which might uncover more about this artist including an extensively inscribed family headstone at All Saints, Maidstone.’

Surely we deserve to be told more about this work as a starting point for the discussion. For example, why does the collection attach the name Gegan and the date 1860 to this work?

A James Gegan is recorded in poll lists and directories working in Rochester and Maidstone as a carver, gilder, plumber, painter, house and sign painter, between 1806 and 1858.

I believe that J.J. Gegan is the artist James John Gegan (his father James Gegan - noted by Andrew - does not have a middle name on any of the records that I reviewed and his grandfather John James Gegan died in 1818).

His name appears in full on his probate record (attached). According to this record, he died on October 3, 1889. The record indicates that he was formerly of Maidstone, Kent, and lived with his wife at 5 Hereford Terrace, Iffley Road, Oxford.

According to a christening record on Ancestry (attached), he was baptized in Maidstone, Kent, on June 29, 1821.

He is on the 1861 England Census, living in Maidstone, Kent, with his father James and two others (gilder, housekeeper). He is an “Artist & Landscape Painter”. His future wife, Elizabeth Ann Cooper, is a governess in Leeds, Kent, on a separate Census record.

He is on the 1871 England Census, living in Paddington with his wife and a servant. He is employed as an “Artist. Painter”.

He is on the 1881 England Census, living in Maidstone, Kent, with his wife and a lodger. He is an “Artist. Painter”.

I will hold off on posting the Census files (for 1861, 1871 and 1881) and the details about his wife, marriage date and parents until others have confirmed that he is the likely artist.

This looks like a similar case to William Pratt of Greenwich: i.e. only one work attributed to him is known. In Pratt's case it was at least clearly signed and dated so (as Jacob has already said) we need to know if that is the situation here - the date being specifically given as 1860 - and, if not, why Gegan's name is involved: also why 1844 is so far given as the start of his working period. Or is that because it includes some feature known to date from 1844?

The state of the picture doesn't help: if a 19th-c. date was not already attached it would be understandable on general appearances for another rough initial guess to be late-17th/early 18th.

Here are two other works by “Gegan”, both set in Kent:

Artist J.J. Gegan
“A View of Eridge Park, Tunbridge Wells, Kent, 1849”
oil on canvas
54 x 76.8 cm
https://tinyurl.com/mtm7y2re
I have attached a composite that includes this work.

Artwork was displayed and sold in Mr. James Gegan’s shop on Bank Strret in Maidstone. The Art Union of London had members in Maidstone. I have attached an article from 1844.

A record from 1789 at the National Archives refers to both John James Gegan (who died in 1818) and William Cox.

This a large work. See the attached reference in the Maidstone Journal and Kentish Advertiser of May 31, 1869, to an even larger work by James Gegan of Maidstone, residing in Oxford. His painting “the Dream of Human Life”, was “12 feet by 8”.

Fascinating... and a fairly late example of something commoner in the late 18th and early 19th-century. J.S. Copley really started it with his 'Siege of Gibraltar' (now in the Guildhall) and others followed; very large single works (or pairs) shown as public spectacles in tents, halls or printsellers' galleries, often connected with the pomotion of related subscription engravings. One of the latest I can recall offhand, a little before Gegan, was Frederick Edwin Church's 'Icebergs' (1861) -which was eventually left in England and found in a house that had become a by then-disused boys's reformatory in Manchester in the 1980s, before it went back to the US (for quite a sum). This one however sounds more like Blake-ian revelation in its motivations: I wonder what happened to it?

With a possible mistake in the representation of the artist's name, the Royal Academy exhibited in 1848 a work entitled 'At Bidborough, Tunbridge', as catalogue no. 409, by F. (sic) J. Gegan, of Maidstone, Kent.

From his address of "Maidstone", in 1859 J. J. Gegan exhibited at the Royal Society of British Artists a single work, entitled 'View on the Medway, at Burham, Kent":

Those with the Society's records might check to see if he exhibited there in other years.

The attached, from 'Round Bout Kits Coty House, an essay in popular topography' (1861), shows a frontispiece reproduced from a large painting by Gegan, "another native artist" from Maidstone.

The attached composite show a similarity of compositional style between the two paintings.

Pieter, the attached article, from the 4th February 1882 edition of the The Architect and Building News, might hold some clue as to where might be "A Dream of Human Life" (sic). It certainly suggests that at the time in 1882 it was in Maidstone Museum.

There is a drawing based on that ‘Kits Coty House’ image, Kieran, on the Project Gutenburg website: https://tinyurl.com/9a26t6v4.

The Gegan family owned an art-related business on Bank Street in Maidstone. A label for “W.G. Gegan” of Maidstone is on the back of a work by Stubbs (‘Portrait of a Large Dog’(Dingo))(the final image at this link on Open Art Images, https://openartimages.com/search/sydney-parkinson#opt-in). I have attached an image of the label.

In their "Victorian Painters" by Christopher Wood, Christopher Newall, and Margaret Richardson (Antique Collectors' Club, 1995), Gegan's listing mentions that between 1844 and 1860 he exhibited a total of eight landscapes, "all Kentish views", at the Royal Society of British Artists' annual shows.

Pieter, see also the attached, from the Kentish Mercury, of Saturday 9th July 1870.

I have attached his Census records for 1861 and 1871 from the Ancestry website. 1881 to follow due to size restrictions.

I have attached his Census record for 1881.

Perhaps Art UK could broach the possibly embarrassing question to Maidstone Museum and the Bentlif Art Gallery : i.e. if Gegan's 'Dream of Life' was given to it as the Charles Museum by 1870 and was still there for Bentlif himself to include it in a lecture on the collection in 1882 do they still have it or, if not, where and how did it go?

Municipaliites often placed paintings of this size in other large public buildings in the town. It would be worth asking the Corporation about this

Pieter, I have asked that question about the location of 'Dream of Life', and mentioned your suggestion Martin about a search on a larger council basis. David

The Collection have confirmed that they have a catalogue record of this work, unfortunately historically missing, titled 'The Dream or Drama of Human Life', and 146 x 88.

Here is some information about the parents of J.J. Gegan:

According to Civil Registration data on Ancestry, his father James Gegan passed away in June 1872, age 87 (birth year 1785). The grave information compiled by the Kent Archeological Society for All Saints Church, Maidstone, Kent, indicates that his birth year was 1787 and that he passed away on June 9, 1872 (https://tinyurl.com/yhectnz8). He was likely born in 1784 - there is a christening record for a James Gegan of Maidstone, Kent, son of John and Hannah Gegan, dated October 20, 1784. His name is on the back of the headstone of John James Gegan and his wife Hannah (https://tinyurl.com/yhectnz8) and he is also mentioned on the front of it as being their son.

On the 1841 England Census, James Gegan is a widower and a “carver”, living with his son George, a “cabinet maker”, in Maidstone, Kent. James Gegan was a “carver & gilder” in the 1851 directory for Maidstone, Kent: https://sites.rootsweb.com/~mrawson/maiddir51.html

According to the headstone information cited above, his mother Ann passed away on June 12, 1835 age 47 (born in about 1788)(the date June 12 is in conformity with the burial entry for June 19, 1835, shown on another record on Ancestry). There is a news article on the Kentish Gazette of June 23, 1835, that indicates that she had been ill for six years. Here is the headstone entry:

Here is some information about the wife of J.J. Gegan:

﻿According to a christening record on Ancestry, his wife Elizabeth Ann Gegan (née Cooper), was baptized in Framlingham, Suffolk, on January 23, 1823. Her parents were James Cooper (a tailor) and Elizabeth Savage. According to the 1891 England Census and the 1901 England Census, she lived with her widowed brother James and his children in London after her husband’s death. Her probate record indicates that she died on November 7, 1906, in Hampstead.

There is an error in the marriage records on Ancestry. James John Gegan and Elizabeth Ann Cooper were married in Q1 1869 in Hackney (entry 1b 549 for both, not 1b 649 for her as indicated in a search, which does not match them together).

This is the correct first attachment

I ordered a copy of the will of James John Gegan and it arrived today. It is dated June 17, 1879.

That is a superb biography, Pieter. I have no suggested edits.

Thank you Pieter and Marcie, and everyone else who has commented. This discussion has added a great deal of value and unless there are any further contributions I suggest that we recommend closure shortly.

This has been a very fruitful discussion and thanks go to everyone who contributed. Pieter van der Merwe has prepared a comprehensive biography of the artist which will now be placed on the record. It is recommended that the collection should consider amending the details of the artist from 'J. J. Gegan (active 1844–1860)' to 'James John Gegan, 1821–1889'.

Grant, I have emailed Maidstone to seek their approval of the update. Regards, David