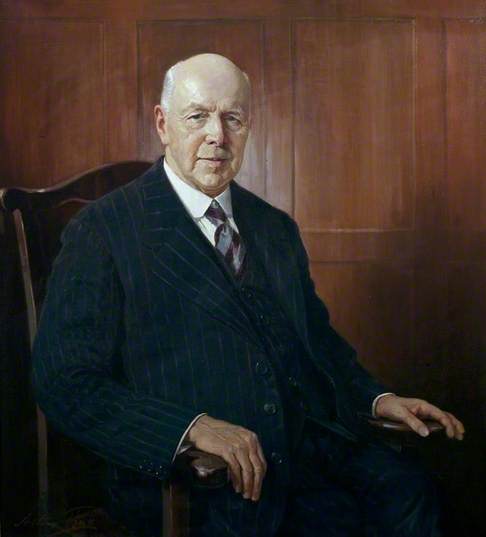 This is signed bottom left and surely dates much later than 1930s/40s.

Comments from the collection: ‘We have no information about this painting, it was found in store when the PCF photography was done in 2009. The painting has a backboard on so there’s nothing to be gained from that. It does however have a note on a label to say that it came from Abbey Pumping Station museum (our technology museum) in 1988, so we can perhaps assume that the gentleman pictured is a local board member or owner of a technology-related business? We couldn’t get any clearer image of the signature than the one you already have.’

Given the probable recent date, and appeal in local media - or even social media, such as Facebook groups - might identify the sitter, and perhaps the artist.

I think the artist is Arthur Pan: https://artuk.org/discover/artists/pan-arthur-18941983

Signature very clear on this one: https://artuk.org/discover/artworks/percy-huxter-52724

Well done Andrew, I think you are spot on in identifying Arthur Pan as the artist. The subject is quite typical of commissioned portraits of his and that signature is very distinctive. As to date, as Martin has suggested, the work must be later than 1930s/1940s and probably circa the 1960s. Identifying the sitter may be more problematic.

I am pasting below the link to the Wikipedia article on Arthur Pan.

The well-known Gimson family are connected to the Abbey Pumping Station museum, so worth examining the Gimson connections through the 20th Century, at least to eliminate from our enquiries.

The portrait may be after a photograph.

Following David's Gimson suggestion- could this be our sitter twenty years on????
https://www.leicesterlitandphil.org.uk/1955-c-gimson-1955-56/

That’s an excellent suggestion, Louis. Perhaps the portrait was donated along with the seven-foot-long bed in 1988. My own guess is Sydney Ansell Gimson (1860–1938). The attached newspaper articles show that his work and personal interests make him a strong candidate to be the sitter. A portrait is mentioned in the article from the 'Leicester Evening Mail' but the refugee who painted it was likely Belgian.

Arthur Pan arrived in England as a refugee from Hungary in 1937. He could well be the painter mentioned in Marcie's Leicester Evening Mail article as having painted the portrait of Sydney Ansell Gimson, who died the following year, but I do not believe that this discussion's portrait is one of him. In both of the attachments above, S. A. Gimson is shown as a heavily-moustachioed man, and our sitter here is not so. Adding an earlier photograph of him, attached is a composite for consideration.

The other point, as mention, is that Arthur Pan was Hungarian and not Belgian.

Yes, not Sydney Ansell Gimson, who would have been a sick-looking 77/78 year-old, "unable to take an active part in public work". Our sitter seems to be in decent shape, and looks nothing like the very overweight man in what is clearly the more recent press photo; and of course the lack of moustache is a clincher.

Furthermore, Pan could not have been the artist of the earlier portrait of Gimson either: reading the articles carefully, it's clear that (as one would expect) the Belgian refugees he worked with came during the First World War, so the portrait would have been pre-1920. As Kieran says, Arthur Pan arrived in London in 1937 (actually from Prague, though he was indeed Hungarian), and it is also stated that, although well-travelled, he had never been to England before - Wikipedia is wrong to say he painted here from 1920.

Sydney’s younger brother Christopher Gimson (1886-1975), as suggested by Louis, is a slightly better idea, but not good enough. He spent almost his entire working life from 1911 in NE India; the photograph in Louis’s link shows him in the mid-1950s (which is closer to when I suspect our portrait was painted), after his return to England and Leicester on retirement in 1947/8. I think the age is about right - but his features are really very different to our sitter’s (compare the noses), he has more hair on top...and once again he is sporting a moustache. See attached comparison.

Assuming the sitter has a Leicester connection does his purple-and-silver-stripe tie ring any local or other bells (school or other affiliation)?

Thanks Osmund for the comparison.Yes- too many details wrong.However there does seem to be a sort of family resemblance I think. Here is another Gimson, with a stripy tie.1937 He has six portraits at the NPG. No web image available.So a well known person.
https://www.alamy.com/captain-gimson-of-the-guides-cavalry-arrived-at-the-southampton-port-by-flying-boat-from-india-where-he-led-a-party-of-tochi-scouts-on-a-night-raid-to-capture-a-mountain-position-held-by-tribesmen-he-was-met-on-arrival-by-his-wife-14-july-1937-image359618332.html

Those are two different men - the army unsurprisingly had more than one Captain Gimson during the C20th:

Richard Allynne Stanford Gimson (1922-2018) was at least born in Leicester (though he didn't stay there), but is obviously *much* too young. Several photos of him here: https://bit.ly/3UIshLS.

William Alexander Gimson (1899-1979) is also too young, spent most of his career in India (he's the Guides Cavalry man), had no known connection with Leicester, and as the image you link us to shows, was slim, fit and had a big moustache. Even if you added 30 years & 30 lb, and took away his hair and 'tache, he wouldn't look like our sitter - but in fact in later life he looked very much like an older version of his 1930s self, as you can see in the attached.

Louis, could you not do at least some of this research yourself, instead of just throwing out the names of random men called Gimson?

I thought I'd add some images of Pan's work from the British Newspaper Archives to this discussion.

The pose that Pan used in his portrait of Brian Desmond Hurst in 1940 strongly resembles the pose in this portrait.

Might I tentatively suggest our sitter is Harold Brewer Hartley,1878-1972---who was a very eminent Chemist and FRS. He was sometime involved in water softening treatments.
https://royalsocietypublishing.org/doi/pdf/10.1098/rsbm.1973.0014
And here he is in 1937 at the NPG.
https://www.npg.org.uk/collections/search/portrait/mw139311/Sir-Harold-Hartley?LinkID=mp91151&role=sit&rNo=1

Hartley with a moustache and glasses, our man without.

Jacob - did you look at the header photo on the Royal Society pdf article.? No moustache and notice the neck tie.

Hartley with glasses, our man without. And the tie differs. Without supporting evidence, superficial likeness is sadly not enough.

Leicester Museum and Art Gallery is a well-run significant institution. My sense is that we have to go back to basics.

Furthermore, David Saywell has said (09/11/22) “the well-known Gimson family are connected to the Abbey Pumping Station museum”. I wonder where this information comes from and whether David is aware of a history or documentation relating to this museum. Of course there were other connected to the museum who may be worth investigating.

Jacob--- on the back of our sitters right hand there is an unusually large pronounced blood vessel/vein. This seems identical in the header photo of the Royal Society pdf.
Secondly- and I know this is a bit subjective, but the way the tie is tied,knotwise,is also identical. I do think Harold Hartley is worth investigating as our sitter. Cheers.Louis.

And his connection with the Pumping Station?

Jacob, my Gimson suggestion was only made when educating myself about the Abbey Pumping Station museum website https://www.abbeypumpingstation.org/ and thinking it might be a descendant of Josiah and Benjamin Gimson. Absolutely no evidence, just a line of enquiry as to why a portrait would be in a technology museum and if it was in there during its time as Leicester's sewage pumping station. Regards, David