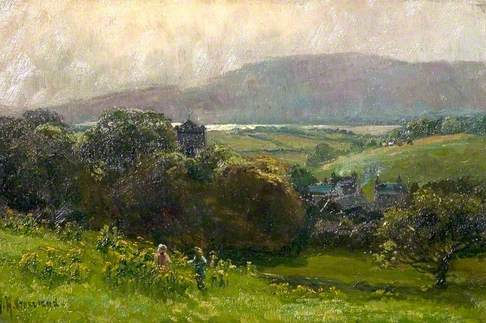 I would say this picture is from above Kirkby-in-Furness looking across the Duddon estuary to Black Combe. I live nearby and know this area well and I know James Crossland painted in this area. I wonder why it is thought to be Derbyshire?

This discussion is now closed. The location was identified as a view from above Kirkby-in-Furness, in Cumbria, looking north across the Duddon estuary to Black Combe. The title has been changed to 'Spring: A view north from above Kirkby-in-Furness towards Black Combe'. The artwork description field has been enhanced to reflect the artist lived in this area and knew it very well.

The Collection has commented: 'We cannot see why this painting is identified with the landscape around Belper, or indeed the Derwent Valley. A colleague has been into our stores to check the painting but could find no inscriptions or other information pertaining to the identification with Belper. The expanse of water in the distance would not fit with the landscape it purports to show, and the church tower towards the foreground does not seem familiar either. Does the church tower match an existing (or since demolished) tower in Kirkby-in-Furness?

We took a photograph of the reverse, but the notes seem to be related to the reframing of the painting. We also took a close-up shot of the church tower in case it is of further use in helping with the identification’.

Belper is on a hill, not in a valley. The scale of hills also not near Belpdr

The artist exhibited at the Royal Academy in 1898 from an address at Windermere and from 1903 until 1919 from an address in Broughton-in-Furness. With the exception of one work of the Isle of Skye, all of the titled paintings depict views within or close to the Lake District.

Louise McArthur is surely correct. Here is a Francis Frith photo of the church, estuary and hills behind. https://www.francisfrith.com/kirkby-in-furness/kirkby-in-furness-beckside-c1955_k114004

I do not know Kirby but agree with Shaun: its not remotely like the Derwent valley at Belper (a little north of Derby). As the Kirby photo makes clearer, the water is an Irish Sea inlet, not a river or a lake, though someone else will have to supply the name of the bay.

A wider review of known works by Crossland, including those sold at auction, confirms that the artist found the majority of his subjects in and around the Lake District. He clearly enjoyed mountainous landscapes as there is also body of work from North Wales and the Scottish Highlands. I also found one painting, dating from 1887, of Whatstandwell, in Derbyshire, which is four miles north of Belper (a canvas 48 x 75cm, sold at Neales, Nottingham, on 10th June 2004, not illustrated). There was nothing else relating to Derbyshire that I could locate. Crossland's work from the 1880s is very much Victorian in feel and very popular at the time, whereas the Derby Museums painting is more 'plein air' in style and I would suggest the present work is from 1900 to 1910 in date. One other interesting find from the research was a panel by Crossland of 16 x 24cm titled 'Black Combe from the Moss, Broughton-in-Furness' (the 'Moss' may be Moss House Farm), auctioned at Bonhams, Edinburgh on 17th October 2013 (sadly not illustrated). This provides evidence that Crossland painted directly in the area identified by Louise MacArthur, albeit a little to the north of Kirkby-in-Furness. Given that the topography around Belper is very different from the view in the present painting I share the views expressed above that the Derby Museums work has been mis-titled and that the painting is indeed, as Louise has said, and others have concurred, a view from above Kirkby-in-Furness looking north across the Duddon estuary to Black Combe.

As a result of local knowledge and by reviews of the topography in both Derbyshire and South Lakeland, Cumbria, it has been confirmed that the painting hitherto known as 'Spring in the Valley, Belper, Derbyshire' is in fact a view from above Kirkby-in-Furness, in Cumbria, looking north across the Duddon estuary to Black Combe. The artist, James Henry Crossland, lived for some years at Broughton-in-Furness, which is in the immediate locality of this subject, an area he knew very well. It is recommended that the title of the painting be amended to 'Spring: A view north from above Kirkby-in-Furness towards Black Combe'. Our thanks go to Louise MacArthur for bringing the matter to our attention.

This is great, thank you to everyone involved for bringing this to a conclusion. I shall amend the title in our records for the picture, too.

Title
Spring: A view north from above Kirkby-in-Furness towards Black Combe

Description
The artist, James Henry Crossland, lived for some years at Broughton-in-Furness, which is in the immediate locality of this subject, an area he knew very well.