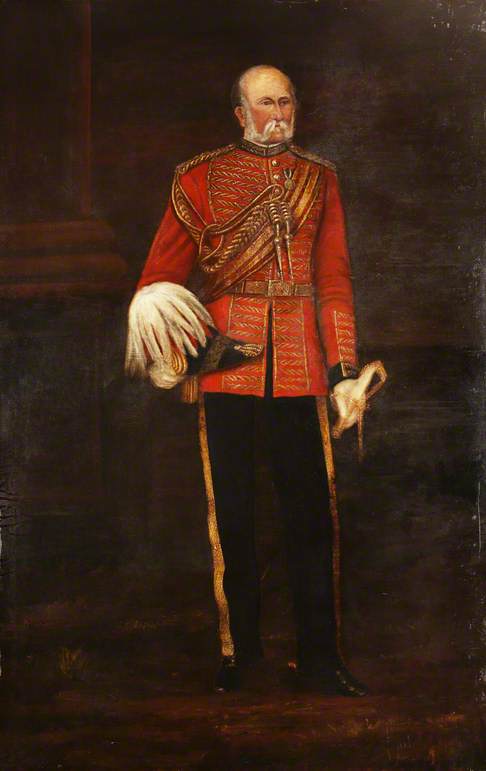 The Collection has commented: 'We've had a look at this portrait again and we have noticed that the hands are quite poorly rendered. Almost as if it is unfinished. We have also discovered it is the same size and format as another large portrait in our collection which is attributed to Richard Evans, a local Shropshire artist. This is also of a military gentleman and was commissioned to be hung in the new county hall. So we suspect that this portrait may have been commissioned at the same time. Is anyone familiar with the works of Richard Evans? Investigating the uniform and medal worn in this portrait we wonder if this is a portrait of George Charles Herbert, 4th Earl of Powis and former Lord Lieutenant for Shropshire?'

This discussion is now closed. The sitter has been identified as Orlando George Charles Bridgeman (1819–1898), 3rd Earl of Bradford, wearing the distinctive uniform of Master of the Horse. The portrait is likely to be by a minor local artist, whose identity will not be pursued further here.

It looks like the work of a "local artist" and not likely to be by Salter.

I think the figure might be General Frederick Sleigh Roberts (1832-1914), a popular hero in his day - probably copied from a print or a photograph.

Except that our man is wearing a single medal whereas Roberts is usually shown with numerous.

The facial hair does not match that of Roberts in his old age, and photos of the 4th Earl of Powis do not seem to match either.

The uniform is Master of the Horse. It's a royal appointment.
https://en.wikipedia.org/wiki/Master_of_the_Horse

Excellent, Charles. That means the sitter is perforce a nobleman, but not the Earl of Powis nor Frederick Sleigh Roberts (who became Baron and later Earl of Roberts), since neither was Master of the Horse.

Does the collection have an idea about the date of the picture that is narrower than 19th century? When was it acquired? Is there provenance information?

I think that the sitter is Orlando Bridgeman, 3rd Earl of Bradford. The painting is in the Shrewsbury museum, and the Earl was MP for South Shropshire from 1842 to 1865, also Deputy Lieutenant of Shropshire. He was Master of the Horse from 1874 to 1880 and again from 1885-6.
The style of the uniform which has not changed for around 170 years must be after c1856 when the British uniforms changed from the tailed coat with large epaulettes, to a skirted tunic. I attach a list of Masters of the Horse for the 19th and 20th century. But I narrowed my search to the late 19th century because of the sitter's facial whiskers. I also attach a photo of the Earl whose face, especially the eyes, resemble the portrait in question.

I would just like to add one more piece of evidence. The sitter has only one medal which supports the notion that he did not have a distinguished military career. The medal is probably for some civilian contribution. The Earl was not a professional soldier although he did serve in the Shropshire Yeomanry. The only other person who might fit the profile in question is the Duke of Beaufort who also had whiskers like the sitter, but he was a military man and would have had a lot more medals.

Though the likeness is not that great, I'd just about come to the same conclusion, Charles - for me it's the Shropshire connection that clinches it. Well done most of all for identifying the uniform, without which we'd be nowhere - it rang a distant bell, but I couldn't place it. I also toyed with the idea of Beaufort, but he doesn't seem to have gone at all grey until well after even his second stint as MotH ceased (1868): https://bit.ly/3xkkJmV.

Attached is a perhaps slightly more convincing comparison image of Bradford (the central figure) from 1874; and here's another from the same year, albeit a gentle caricature: https://bit.ly/3aAnJSB. His hair is darker, though, in both, and there's more of it...and the neck beard isn't really right. I think our portrait must date from his second incumbency 1885-86, by when I hope he'd gone balder, greyer, and altered his facial hair to something closer to our joined 'tache-and-mutton-chops. An image from that period would be good if one can be found. It would also be helpful to see a closer view of the medal/ribbon, and/or hear the Collection's conclusion about what decoration it is.

I support Charles's identification of the portrait as the 3rd Earl of Bradford and welcome Osmund's comparisons.

Cracking the artist is another matter. Perhaps a local artist. It may be that the answer lies in early local records.

Thanks Osmond and Jacob. The 1874 photo is very good, and to my mind shows an indisputable likeness to the portrait.

The uniform is definitely that of the Master of Horse to the Royal Household, which is very distinctive with that huge quantity of 'chain-link' gold embroidery. It is still worn by that official today - there are plenty of images on Google - but this portrait is clearly of about 1880. I assume that it would not be too difficult to find from the Court Register or a similar publication who the MofH was round about that date, and presumably he was a Shropshire Grandee.

The painter was clearly not a "name" artist and may not have been a professional one; this is provincial work. Unless the collection's records or local sources can identify him/her or provide suitable clues, I rather doubt an identification will be forthcoming.

This has the feeling more of a piece of folk art than of a proper studio portrait. There's a real mismatch between the image and the medium - a 90" by 60" oil on canvas.

Could it have been produced for some sort of decorative purpose? Possibly by some for of artisan artist, such as a sign painter.

Thanks all for your input. I think that's pretty conclusive that it is likely Orlando Bridgeman. The medal he is wearing is, we think, a commemorative medal for Queen Victoria's Diamond Jubilee, so that would date it to after his second stint as MoH. Great to also have the uniform identified. Thank you all for your helpful investigations.

This short sharp discussion, "Could this be by William Salter or an artist close to him?" has led to the answer that the portrait is likely to be by a minor local artist who, if identifiable, may be revealed by local research rather than on Art Detective.

Very positively, the discussion has led to broad agreement, welcomed by the collection, that the subject of the portrait is the local dignitary, Orlando Bridgeman, 3rd Earl of Bradford, wearing the distinctive uniform of Master of the Horse. On this basis, I recommend that the discussion can now be closed.