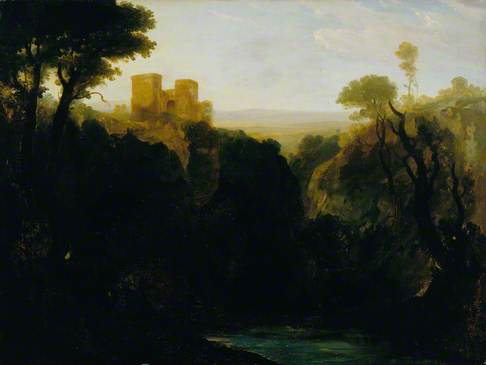 The architecture doesn't quite match up, but the building has been modified many times. Thomson's pictures of other castles, such as Fast Castle, also seem to show a degree of artistic license. Presumably he painted the work in his studio, rather than observing it and has romanticised the landscape, making it look more Italianate. There are various watercolours of the castle by Turner, who was a friend of Thomson and visited him on his Scottish tours.

The other castle it could be is Borthwick, again suggested by our administrator, who knows the area well. However, the architecture doesn't add up as well and the hill the castle sits on isn't as steep as the one in the picture. Turner also painted Borthwick on his Scottish tours. Doune Castle has also been suggested in the past.

The final possibility is that it's an imagined castle – that it's not supposed to show a particular castle at all, but instead is just meant to be an evocative image.

What does everyone think? Any ideas are very welcome!

This discussion has now been closed. There was no conclusion and the two possibilities are Cathcart and Doune. It was thought that the discussion went as far as it could. This work may not represent any particular castle.

I don't think it is Crichton nor any of the other castles you've suggested. There are two views of Crichton by Thomson and both clearly show the squarer architecture of Crichton:

Thomson tended to make the landscape more dramatic but was more faithful at rendering the architecture. Regrettably I can offer no suggestions yet of which castle it is!

Roslin or Rosslyn Castle , also painted in 1830 by Thomson [Hunterian Art Gallery, University [of Glasgow], has a similar setting, but is different in appearance to the building in this picture. http://www.bbc.co/arts/yourpaintings/paintings/rosslyn-castle-from-the-glen
The Hunterian also has a lithograph of it of 1803 by the amateur Miss F. Waring [no photograph on the Hunterian INCA website- another unphotographed impression is in Yale Center for British Art in New Haven
There are many representations of this castle in the British Museum, of which the closest are a watercolour by Hugh William Williams and an etching by Alexander Nasmyth. Part of the problem is it is clear that much more survived c. 1800 than c. 1830
Another source worth exploring is the British Library's online catalogue of the topographical work in the collection of George III http://www.bl.uk/onlinegallery/onlineex/kinggeorge
about 70 Scottish castles at least can be found there
There are evidently many more in the British Museum Print Room, of which as yet, only a small number have been photographed digitally

Sir Walter Scott mentions a picture of Crichton Castle painted by John Thomson in a letter written to Lady Abercorn on February 15th 1815: ‘I spoke to Mr. Thomson about the picture [Scott does not say which one]. He did not like it it seems and is doing another. I wish he may be as successful as in one he presented me with which is, really and without any allowance being required, a very fine thing indeed. It is a view of Crichton Castle near Edinburgh once a favourite haunt of mine but not slavishly correct as to the surrounding landscape.’

On February 24th 1815 Scott wrote a letter to Daniel Terry and thanks him for sending a painting. Scott says: ‘So we have hung it in the little drawing room under a very noble picture of Crichton Castle of which Thomson the Minister of Duddingstone made me a present the other day.’

John Thomsons biographer, William Baird writes (this biography was published for the first time in 1894, see chapter 6): ‘It (Crichton Castle) was a favourite subject with Thomson, being often painted by him, in oil and water-colour; while both Sir Walter and John Thomson gave their united efforts in pen and pencil to illustrate its scenery in the Provincial Antiquities of Scotland.’
http://www.electricscotland.com/history/men/john_thomson6.htm


Maybe he not only took some liberties with the landscape but also with the architecture of the castle. Sir Walter Scott’s describes the castle in ‘Marmion’, which I think is quite fitting (especially concerning the towers):
That castle rises on the steep
Of the green vale of Tyne:
And far beneath, where slow they creep,
From pool to eddy, dark and deep,
Where alders moist and willows weep,
You hear her streams repine.
The towers in different ages rose;
Their various architecture shows
The builders' various hands;
A mighty mass that could oppose,
When deadliest hatred fired its foes,
The vengeful Douglas bands.

I searched through over 2000 paintings of castles last night and the best I could come up with was Cilgerran Castle. The landscape is identical but the architecture isn't. Architecture wise, the closest I found was Dudley Castle.

My searches weren't entirely in vain as I stumbled across an interesting Dobson copy, which I will submit for discussion.

this image of Crichton is identical to modern photographic views so definitely not your castle.

I admire Tim Williams' dedication in embarking on such a marathon!

Searching the old newspapers, I have found reference to five paintings by John Thomson with castles mentioned - Cathcart, Craignethan, Dunlace, Kilchurn and Threave.

Cathcart was pulled down completely a few years ago, but it was by a river and perhaps not too dissimilar from some old pictures.

Cathcart was still standing in part when I was living in Glasgow. I would say it is a possibility. There are engravings of the castle, which could be checked - in particular see the one of 1798 by R. Scott after J. Denholm in the RIAS Nelson collection which was published in 1802 in An elegant collection of interesting views in Scotland., no doubt recorded in one of Major J R Abbey's volumes

This biography https://archive.org/details/johnthomsonofdud00napi includes a descriptive catalogue of Thomson's works. The catalogue fills more than 100 pages and lists dozens of paintings of castles.

I have not yet found one that matches the painting above, but maybe someone else is more successful.

The above link is a view of Doune Castle. Given his Romantic sensibilities it is not impossible as the location of the painting

Wikipedia's description of Cathcart Castle "The castle was built on the rocky north-east bank of the White Cart Water. It comprised a rectangular tower house, 15.5m by 9m, of five storeys including a vaulted basement. This was supplemented by a curtain wall, enclosing a small barmkin approximately 22m by 15m, with the tower at the centre. The curtain wall had round corner towers, and a twin-towered gatehouse to the east. The foundations of the tower house remain to around 1m high. Earthworks to the west of the castle have been interpreted as the remains of an outer bailey or ringwork.[6]". The height of the ruin's site above the White Cart Water on OS maps may help define whether it is Cathcart Castle's location.

Thank you all for the comments. we are no further forward on this one other than eliminating lots of possibilities. We are back to Cathcart and Doune which i will put on the record.

Doune Castle seems a possibility if we allow for a lot of artist's licence, but I think we can elimate Cathcart, which only had one tower, and not the two linked with an (entrance?) arch as seen in the painting. There are plenty of clear images online, e.g. http://www.kithcartclan.8k.com/cathcart_castle.htm.

As the Stirling Smith pointed out earlier, it is quite possible it is not intended to represent any particular castle.

This discussion appears to have gone as far as it can. I recommend it is now closed

Title
Landscape with a Castle