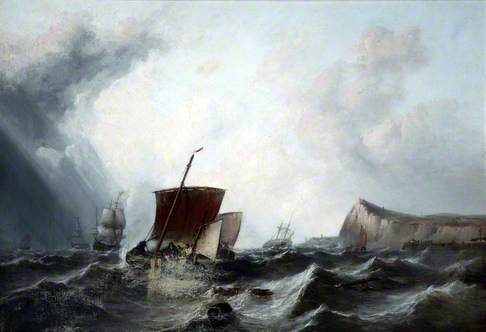 The painting was acquired by the collection in 1939 as a work by Clarkson Frederick Stanfield, also known as William Clarkson Stanfield (1793–1867). Should it be reattributed?

The painting has been tentatively dated to the late 1860s/early 1870s as it appears to include the Admiralty Pier to the right. However, the pier is thought to have been in use from around 1850, within the lifespan of both artists.

This discussion is now closed. The artist record has been altered to 'Attributed to George Clarkson Stanfield (1828–1878)'.

Thank you to all those who contributed to the discussion. To those viewing it for the first time, please see below for all the comments that led to this conclusion.

The rather weak Ships at sea in the Wisbech Museum by an imitator of Clarkson Stanfield also shows both Shakespeare Cliff and the Admiralty Pier. But I think that the vigour in the painting under discussion is more likely to be indicative that the original attribution might be correct. Could it be a very late work?

I'm sure this isn't Clarkson Stanfield the father (1793-1867) though influenced by his manner in sky and sea, but the ships are not right, and it doesn't look like George his son (1828-78) either: William Clarkson never existed- a long-running error. I agree the date re: the western arm of the harbour which was started in 1847 and Clarkson probably sketched the area about then - though it doesn't appear in his 'Shakespeare Cliff, Dover, 1849' of 1862 in the National Maritime Museum (BHC1212). Compare the two and you'll see why, more specifically, this is not by him. Though a late work the NMM painting is characteristic.

I am sure that you are right, Peter. We probably should be looking for a younger artist

It looks more like J.B.Pyne to me. He did this sort of seascape - we recently had one with icebergs in it - and his 'livres de raison' can be consulted in the V&A. Might be worth looking in there using the known subject.

Thanks James: an interesting comment. It would be encouraging if it was since Pyne -except when in his more usual sunny palette- he is elusive to nail down. We have a 'Guardship at the Nore' , ex-Nettlefold Collection (the screw manufacturer who was a well-known Birmingham collector) which also has a Stanfieldian sky and is in the Nettlefold catalogue as by Clarkson S. but certainly isn't. I once checked that against a picture list of Pyne's (though for some reason, as I recall, I think in the NPG - odd as that sounds) and couldn't find it: I'll put it up here again to see if anyone has suggestions. After 40 years I've still not seen another convincingly similar, so that one would be good to crack too.

This is the lively 'Guardship off the Nore' which Pieter referred to. http://collections.rmg.co.uk/collections/objects/12702.html Though there is something old fashioned - early 19th c - about the waves and clouds to me.

Thanks Andrew: I in fact put the 'Guardship' up as an Art Detective query about two years ago, but so far there has been no advance.....

Although there has been no further comment for some time, I think the contributions by Pieter and others have answered the two specific questions raised in this discussion, namely that this work was not painted by George Clarkson Stanfield and that it is likely to date to 1860-1870. Is it appropriate to recommend that the identity of the artist be amended to 19th Century British School (circa 1860-1870)? If further information comes to light in future the discussion could be reactivated.

I agree: the Stanfeld (father) influence is there in the manner of sky and sea but thats as far as it goes.

...but could the Atkinson be quite sure it has no trace of a signature: my reason for doubting it is George Stanfield (the son) is mainly the colouration compared to the bright way he usually paints: however subjects alter cases and the condition here may conceal something.

Marion, you may have seen the latest posts. As Pieter suggests, would it be possible for you to ask the collection to make a final check of this painting for a possible concealed signature in order to rule out George Stanfield as the artist? If nothing emerges, we can subsequently bring the discussion to a conclusion.

I have just spoken with Stephen Whittle at the collection, who confirmed that this painting was thoroughly checked for a signature, including on the back. He agrees that we could close this discussion now.

Sorry to prolong this but could the Atkinson shed any light on why it has a George Stanfield attribution: if it was given to them as by him (despite lack of signature) as far back as 1939 then my inclination would be to leave it as 'attributed to', simply on the grounds that I am not absolutely sure and it is not entirely impossible.

It was given to The Atkinson as a work by William Clarkson Stanfield, i.e. Clarkson Frederick Stanfield, in 1939. I'm happy to go with 19th Century British School if that's the general consensus?

I think an 'attribution to' George C. Stanfield (the son) is justifiable: (a) partly on painting style, though it would be useful to see more of him in 'dark mode' rather than his more usual brightly coloured European landscapes. Both the sea and the dramatic squall in the sky to left owe a lot to his father, while the underwhelming representation of Shakespeare Cliff to right looks more like something from a model railway landscape setting, as his landscape features often do (b) because there is often an element of truth in 'as received' artist identities - here a case of wish-fulfilment that it's by his father (Clarkson) when George is more likely - and (c) because there is a compositionally related watercolour of the shipping by George in the V&A (D.203 -1890). Its not online but I attach a rather grainy snap from the printed catalogue.

My lack of certainty is simply that I have spent little time on George compared to a great deal on his father, and the decision anyway rests with the Atkinson. It's not the father (Clarkson) but I think there is a sufficiently reasonable probability it is George not to drop back as far as '19th c. British school'.

I think we should move to close this discussion. Given the invaluable comments made to date by Pieter it would be my recommendation that the identity of the artist should read 'Attributed to George Clarkson Stanfield (1828-1878)' rather than our making a definitive statement that he is the painter of this work.

I agree that suggestion: as always. its provisional, but we are not going to get further at present.