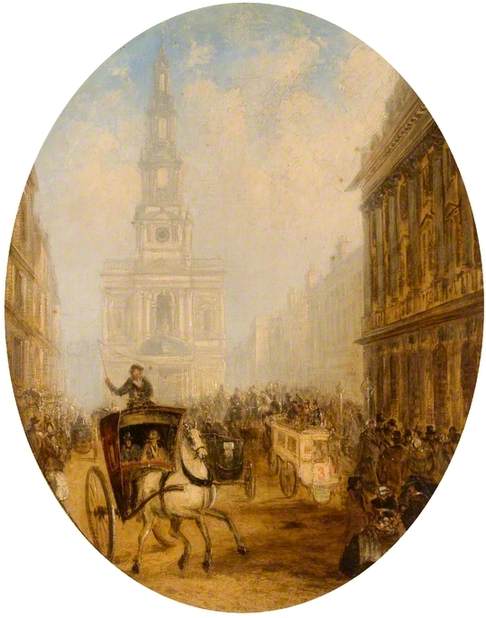 This painting was purchased along with another in 1960, 'The Strand London' (also on this site), from Chichester by one of our first curators. They both complement our horse-drawn vehicle collection at Stockwood Discovert Centre, but unfortunately we have no further information on them, and would appreciate any help from the viewers.

This discussion is now closed. This painting has been found to depict St Mary le Strand, London. Details of the streets and vehicles suggest that it was probably painted in the late 1840s or early 1850s. The Art UK record has been updated accordingly and the new information will be visible on the website in due course.

Yes, that's St Mary le Strand, seen from the west looking eastwards, with the Strand frontage of Somerset House to the right. The Strand runs into the picture down the right hand (south) side of the church; the parallel street to the left (north) of the church is the long demolished Holywell Street, swept away by the Aldwych development in 1902-5

I have already emailed the collection that the companion work (http://www.bbc.co.uk/arts/yourpaintings/paintings/the-strand-london-48601) probably shows Saint Clement Danes from Holywell Street.

I'd say it was painted in the late 1840s/50s. The nearest vehicle, on the left, is a Hansom cab and on the right, in poor perspective, is an omnibus with a number 3 on the back. This indicates a 3d (threepenny) all the way fare for the route. The 'bus has crude outside 'knifeboard' back-to-back seating on the roof, accessed by a ladder on the right. The first omnibuses in London, introduced in 1829, were boxy single deckers. Outside seating came in the 1840s. At this stage there were no road rules such as keep left enforced: cabs and buses could pick up passengers from either side of the road and there were no fixed stopping points. The Strand looks suitably chaotic and crowded with a dangerous mix of horse drawn vehicles and crowds of pedestrians in the road including a woman with a basket selling flowers (or veg?) that she will have got from Covent Garden market nearby.

Ralph Hyde, formerly of the Guildhall Library, may well be able to identify the artist who painted this

The style is similar to that of H E Tidmarsh but the drawing is not good enough to be by him.

I have had second thoughts! The church is indeed St Mary le Strand and the building on the right is Somerset House. The street to the left of St Mary's has to be Holywell Street and that to the right the continuation of the Strand.

I think this discussion can now be closed

It would be great if the subject of the companion work could be confirmed as well: http://www.bbc.co.uk/arts/yourpaintings/paintings/the-strand-london-48601

As mentioned above, I have suggested this one actually does show St Clement Danes - in other words, the pair of works the pair show the two churches at Aldwych.

There seems to have been some agreement a while back that this work does show St Mary le Strand so maybe this particular query has been resolved.

The issue of confirming the identity of the location of the companion work - see links above - is separate though I believe it actually shows a view towards St Clement Danes. In fact, given St Mary's is on Strand, it is possible that the titles of the two works have accidentally been swapped.