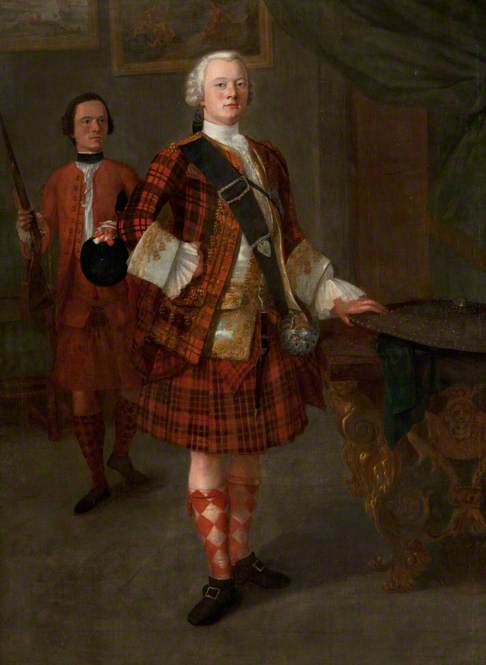 Photo credit: Museum of the Isles

This looks like a portrait by Cosmo Alexander (1724–1772). What does everyone else think?

Examples of the artist's work on Art UK:
https://artuk.org/discover/artworks/view_as/grid/search/makers:cosmo-alexander-17241772/page/2

I was looking at the way the artist has executed the hands and the technique (especially the shading) looks very similar to another portrait which is said to be signed and dated by Cosmo Alexander. Here is a link:

It's just a small observation but I thought it may be worth noting.

This picture, which must be c. 1750s, is similar to Alexander's portraits of the Earl of Findlater and his wife, dated 1756:

My argument, of course, rests on the Findlater portraits being definitely by Alexander, and I do not know how well established that may be. It is curious that some works (taken to be) by him look significantly sharper or harder-edged, but apparently his pictures were rather variable.

I've no idea if it's by Alexander, the other portential candidate would be William Mosman who painted a number of Highland portraits around the same time.

This picture looks closer to the Findlater portraits by or attributed to Alexander than to the work of Mosman, whose style is more finished and more accomplished.

Another, smaller version of this portrait attributed to 'Circle of John Alexander', and formerly in the collection at Fingask Castle, was sold at Lyon & Turnbull in 2015: https://bit.ly/2KLW9X3. It was previously sold at Christie's Scotland on 26 April 1993. The catalogue entry mentions our version, "in the collection at Armadale Castle" - a bit confusing, as the castle itself is just a ruin.

The Collection's description of our portrait says that "it bears a striking similarity to one of Lord George Murray, the prominent Jacobite general". This is probably a mistake. When the Fingask Castle / Lyon & Turnbull version was sold before by Christie's in 1993 it seems to have been misidentified as Lord George Murray. I suspect this is the one they spotted. Artnet also has a poor image of another related portrait that was sold in June 1996, and again it's called Lord George Murray; the main figure is basically the same, but amongst other changes the servant has been removed completely: https://bit.ly/322zGuy

Cosmo Alexander was the son and pupil of John Alexander, and both were associated with the Jacobite cause, so either of them could have painted this.

Assuming the sitter is shown as 13th Chief of Glengarry, which he became in 1754, the date would be 1754-1761. During that period, Cosmo was based in London, though he may also have done work in Scotland, while I believe his father was in Aberdeen (as was William Mosman).

The safest option, of course, would be to list this under Scottish School. It would take greater expertise than mine to make a more specific attribution, though the Alexanders and Mosman would seem to be the top candidates.

Collection
Museum of the Isles

Location
Museum of the Isles

Description
This portrait is one of the few known to show the change and development in Scottish Highland dress. Its subject, Alasdair Ruadh MacDonell, 13th chief of Glengarry, is wearing a belted plaid, and his gillie or servant is wearing a version of what we know today as the modern kilt. A known Jacobite supporter and officer in the French army, Alasdair Ruadh was captured by British Government forces on his return from France in November 1745. He spent the next 22 months imprisoned in the Tower of London. It has been suggested by the nineteenth-century author Andrew Lang that, upon his release, Alasdair Ruadh became the infamous Hanoverian secret agent 'Pickle the Spy'. This painting is also of interest as it bears a striking similarity to one of Lord George Murray, the prominent Jacobite general. Despite this, its provenance as a portrait of Alasdair Ruadh is not in doubt. Not only has the painting always been in the family of the MacDonells of Glengarry but the gillie is carrying heather, the badge of Clan Donald.