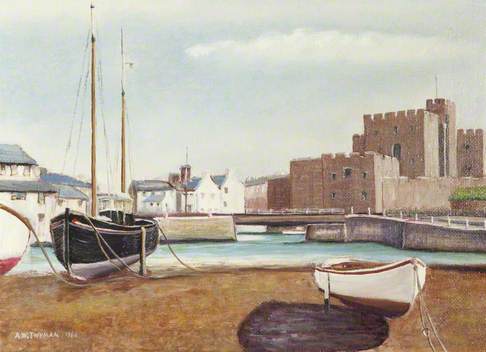 I believe A. W. Twyman was active over a much longer period as I have a painting of Clements Church in Sandwich Kent, where I believe he lived, dated 1934. [assigned discussion leader: Manto Psarelli]

Genealogical records show only one person living in England with those initials. Alfred William Twyman was born in West Ham in 1910.
The 1939 Register shows him living with his parents in East Ham, where he was employed as a "Radio Wireman".
He married In Liverpool in 1964. But I have found nothing to show that he was the amateur artist you are looking for.

I think that is the correct person, Cliff. A letter in ‘The Stage’ in 1997 (attached) written by a woman named Nancy Twyman mentions trips to the Isle of Man in the 60s. I believe that she was the former Nancy Wilcox, born on June 20, 1917, according to her entry in the 1939 England and Wales register (attached). Mysteriously, in green ink beside the entry is not only her married surname “Twyman” but “ECIA MAN” and the date “8.1.59”. Nancy Wilcox married Alfred W. Twyman in Q1 1964 not 1959 (see two records, attached). She passed away on September 17, 2007, in Southport, Merseyside.

I sort of feel obliged to comment on this as this is the view about three minutes walk from where I live. But I couldn't find any other candidates than the 1910 birth already mentioned. Cliff and Marcie have filled that out very helpfully, but there is still an absence of other pictures, for example on auction sites. So almost certainly an amateur and maybe more of a holiday painter than a Sunday one.

I popped into the Archives at the Manx Museum on Saturday to check if they had any more information and they were as helpful as they could be, but they're not allowed to give out donor information and they couldn't find anything more on checking obvious sources. The accession date seems to be the year of painting anyway, so provenance would probably just say that it was donated by the artist.

The only other work on ArtUK is at Milntown (also in the Isle of Man) and dated 1963, which was the year the Edwards purchased the property, so it was probably acquired at the time when they were doing it up. It's of another harbour on the Island and suggests Twyman was a regular visitor in the 1960s - perhaps it's where he met his wife.

The Alfred William Twyman found by Cliff was born on 2 Nov 1910, according to the 1939 Register. This enables us to identify him as the man of the same name & DOB who died at Weston-super-Mare in April 1985. See attached. However there are two marriages for an Alfred W Twyman also in Weston-super-Mare in 1942 & 1972 (also attached) - possibly just a coincidence, but if they are (as seems quite likely) him, then a marriage to Nancy Wilcox in 1964 is problematic. But I am very taken with Marcie's IOM connection, and suspect there is another answer to this puzzle.

If Les Parsons is correct that his 1934 painting of Sandwich is by the same artist, and that the artist lived there (it would be good to hear the evidence of that, and indeed to see the picture), there is another possibility. William Alfred Twyman was born on 20 Sep 1903 at Ash, very near Sandwich, but the attached prison record states that by 1929 (when he was convicted of embezzlement and sentenced to 12 months in jug) he was also known as Arthur William Twyman. The offences took place over several months when he was employed as a clerk at the Royal St George's Golf Club in Sandwich, and his address on his release in Sep 1930 was also in Sandwich. Probably the same man (then still called William A Twyman) had in 1923 married at Eastry (the Reg District for Ash), and as just 'William Twyman' he appears with his parents (his father William was an auctioneers' clerk) and sister in the 1911 Census.

I can't immediately see him in the 1939 Register (possibly in the army?), but he is almost certainly the Arthur W Twyman, aged 54, former clerk of works to the local hospital management committee, who reappears in Manchester in Dec 1957, and is once again in trouble with the law (though formally acquitted). The address given for him at his trial is just a mile from the West Didsbury (Manchester) one noted on the probate record after his death in Sep 1970, and the DOB given in his death record concurs with that of the man born in Kent.

It seems likely that his first wife had either died or divorced him, and that it was he, not the Alfred Twyman born in 1910, who married Nancy Wilcox at Liverpool in 1964.

I, too, am unable to find any references to artistic endeavours. Remaining biographical attachments herewith...

Oh, for goodness' sake - also *Twyman*, not Tyman in the last post. I'm half asleep.

Before researching Nancy Twyman, I had researched the family of Stella A. L. Rigden (Sept. 2, 1903–1995 Thanet, Kent) and her husband William A. Twyman since they are listed in a Kent Archeological Society publication with a Sandwich address (he is shown as “A. Twyman”) https://tinyurl.com/xtaunp24. I had read those articles but had not made the connection. That is remarkable research, Osmund.

Interesting comments. I have attached a picture below of the painting. It is of St Clements Church in Sandwich from Church Street.
My evidence that Twyman lived in Sandwich comes from hearing the name growing up there, usually from my Grandmother who lived in the Ash, Worth Sandwich area all her life from 1901 to 1991. I also remember the name Stella Rigby as mentioned in another post here. In what context those names were used I cannot remember being young at the time.

The 1923 marriage registry record that Osmund produced says William Alfred (or Alfred William) Twyman (b. 1903) married 'Elsie M. A. Rigden', not the 'Stella A.L. Rigden' (1905-1995) identified by Marcie two comments above, both thought to be the Mr and Mrs A Twyman listed at 'Rigdens', 10 Strand Street, Sandwich,as members of the Kent Archaeological Society in or from 1955.

Can the name differences be explained?

It also seems odd that, after a local Kent prison sentence in 1929, Twyman would still be living in Sandwich in 1955, though the house name of 'Rigdens' seems to back that up. But unless his marriage broke up practically at that time (c.1955) to find him as a Hospital committee clerk living in Kingsway, Manchester, in 1957 also seems a very rapid shift.

Here is the marriage record from Ancestry that shows William A. Twyman married Stella A.L. Rigden in Q3 1923. There is also a long article in the ‘East Kent Times and Mail’ of October 9, 1935, about a fist fight between “Alfred William Twyman of High Street, Sandwich” and his brother-in-law “Arthur Manners Chichester Long of St. Peter’s Street”. The men had married sisters and their father-in-law was “Mr. Rigden”.

Hopefully, no-one needs to see the article about the fight.

Pieter, “Rigden’s, 10 Strand Street, Sandwich” was likely the residence (or business) of Stella’s father Walter Rigden. Here is a link to the building on the ‘Historic England’ website. https://tinyurl.com/53cwcnd3

The article about the fist fight indicated that Mr. Rigden lived on Strand Street and that Twyman and Long worked for him (Twyman had reportedly started working for him in February 1935). It also mentions an employee who worked for Mr. Rigden at the “Cattle Market”.

I am attaching the 1911 England Census record for Stella and her family, living in Sandwich.

Here, too, is an article that provides some additional background information about Twyman from the ‘Thanet Advertiser’ of December 6, 1929.

Thanks very much for the image and information, Les. Family knowledge is an absolutely valid form of evidence, and in this case very helpful.

The puzzling and rather unsatisfactory elements in the proposed narrative that Pieter raises actually have simple explanations. They were caused by misunderstandings, one of which I was responsible for spreading here: I often preach about thoroughly checking your facts before you post, but in this case failed to do so myself. Mea culpa.

(1) The incorrect bride for the marriage of William Alfred (later Alfred William) Twyman in 1923 came from FindmyPast, which has it wrong. The reason is obvious (though still not excusable): in the same quarter of the same year in the same registration district *two* women called Rigden were married, Elsie MA and Stella AL, but it was Stella who married Twyman. See attached 1. Elsie and Stella seem not to have been closely related, and I think it’s just coincidence – both Rigden and Twyman are quite common names locally.

(2) The Kent Archaeological Society document found by Marcie (https://tinyurl.com/xtaunp24) in fact shows the list of members for *1990* – the 1955 date is likely the year that Mr A and Mrs Twyman originally joined. See attached 2. From this it is clear that the ‘Twyman, A’ listed cannot be Alfred Wm Twyman – it is almost certainly one of his two sons by Stella, Alfred (b.1924) or Alan (1925-2013), one of whom doubtless inherited ‘Rigdens’/10 Strand St from his mother. See attached 3. That the son was involved in local history is confirmed by the 1990 Listed Building entry for 10 Strand St also found by Marcie (https://tinyurl.com/53cwcnd3) – the source for the building’s detailed history was “information provided by the owner A Twyman”.

This means that Alfred William and Stella may have divorced (or at least separated) long before 1955 – and in fact they probably did, as during the 1935 assault summons against Alfred William brought by his brother-in-law Arthur Long, the latter gave evidence (disputed by Twyman) that Stella Twyman had told his wife (Stella’s sister) that “if she wanted Twyman she could have him. She had finished with him.” He was also described by Long as a ‘lothario’ and responsible for the break-up of his marriage after ten happy years. Stella is found in the 1939 Register at Sandwich (1 Cattle Market), living with two of her children (one is redacted – attached 4) – she is listed as married (‘M’), but Arthur William is not there. However, as a 36 year-old former territorial soldier he was probably one of the first to be called up on the outbreak of war, and this probably explains his apparent absence from the Register altogether – members of the armed forces were only recorded if they were home on leave.

I carefully numbered those attachments and uploaded them in the correct order to enable easy matching with the text above that describes them...but the resolutely bonkers AD software knew better.

I was certainly responsible for the second misunderstanding. I’m sorry that you had to do extra research because of it, Osmund.

Although I understand your concern, Marcie, I don’t feel that showing the report of the fight is that problematic. Of necessity – there is little other evidence of AWT’s life available – we’ve already revealed rather worse things about him, and dropping into the discussion only some selected facts of a minor assault case (the details of which inform the narrative of his life) seems to me undesirable. So I’m attaching it to this, but in the form of a document file that needs to be saved and opened – it should not (unlike my usual jpg images) come up in a Google search. Marion, if you take a different view on the matter, I won’t object if you remove this post.

Actually, people in the courtroom were laughing, so perhaps the article is not so terrible after all.

Here is Twyman's rather chequered trail but good to see he enjoyed painting and, as far as one can tell, it all came right in the end and in terms of his sons.

I would mention that his mother was named Alice (I’m not 100% sure of her maiden name) and he had a younger sister named Alice. Otherwise, another great write-up, Pieter.

Done and reattached: I see this is assigned to Manto to close and suggest it does since the question asked has been answered.