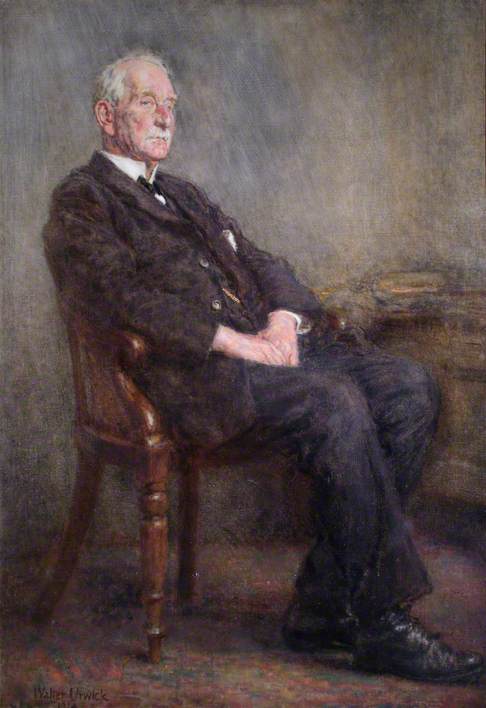 Alfred Langton was the chairman of Hampstead General Hospital from 1911, and of the Royal Free Hospital from 1912 until his death in 1927. He was for the hospitals a major donor of great generosity. These two portraits are similar in appearance and style (they are perhaps best distinguished by one showing the feet of the chair), but whether only one (and, if so, which) is by Urwick, or whether both are, is unknown. It is not impossible that Walter Chamberlain Urwick might have been asked to make one for each hospital, as in those days one was in Hampstead and the other on the edge of Bloomsbury.

Through this discussion we have found that the two portraits are both by Urwick.

No data will be changed as a result of this discussion.

They could both be by the same artist, but there remains the possibility that a second artist was asked to paint a copy of the signed portrait. The similarity in their size would suggest that the one was not a preparatory work for the other

The signature on this (fuller-length) one is comparable with those on other portraits by Urwick (on Your Paintings), so there seems no immediate reason to doubt it's by him. But the other one may once have had one too, as it's possible it has been cut down from the same original size - if you compare the dimensions, the lost details would pretty much exactly be accounted for by the lost height & width - or of course it may just have been a reduced-size version. I don't think either is a standard-sized canvas.

The handling of the jacket and trousers is rather different - in the smaller version the cloth has plainer brushwork and fuller colouring (true also of the background), and simpler, bigger creases. The carpet and ?desk behind are vaguer. And the proportions of head and face appear to have changed, too - the full-length one has a slimmer, more elongated appearance, the other seems heavier and squarer. The same is true of the figure, which in the smaller version has broader shoulders and seems stockier altogether: were both photographs taken square-on, or is this a trick of perspective? I can imagine that the full-length version may have been photographed from below, which would tend to lengthen and attenuate the top of the portrait.

Finally I would note that the wart clearly depicted below the sitter's lip in the signed full-length has been softened or removed (hard to say which at this resolution) in the other. But other than that there seems to have been no greater flattery in the smaller of his (?)bibulous physiognomy - in fact rather the opposite. Actually, taken just as a work of art, I rather prefer the boldness and colouring of the face in the smaller version.**

My guess is - as I think Martin feels - that the signed full-length is Urwick's original; but that at some later point the same artist was asked to make a copy - either reduced, or the same size since cut down. Yes, perhaps one for Hampstead, then later another for the Royal Free. I suspect that a copyist would have stuck more closely to the form of the original, and have displayed less freedom and vitality in the face's brushwork.

**EDIT: I'm now having second thoughts, and wondering if the smaller one, despite its size, could indeed be a preparatory work or less-finished/freer first attempt. Perhaps he (or the sitter) wasn't entirely happy with the shape of the head and VERY prominent florid nose, and adjustments were made so he didn't look quite so like an old drunk - but conversely the sitter also requested (as a blunt-looking engineer with a passion for medicine might) that his wart not be ignored...echoes of Cromwell and Cooper. I doubt we'll never know for sure, and this will just be a matter of subjective opinions - I have two differing ones myself!

But I do believe both are by Urwick, not that I know his work.

Since no contribution has been made to this question for a little while, and since Osmund Bullock considered upon reflection that the smaller picture is reasonably likely to be by the same artist, I wonder if we should take that as our conclusion. Or is there any final thought on this pair?

I am happy to formally recommend to the collection that the two paintings are indeed both by Urwick. I feel too that the smaller is most likely to be a preparatory study for the larger.