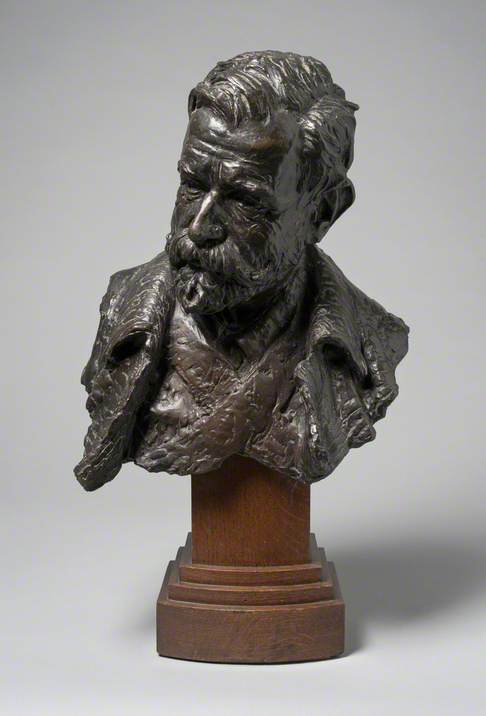 This portrait may be identifiable from an exhibition catalogue, as King exhibited widely, including 37 times at the Royal Academy between 1910 and 1952. The RA lists William Charles King, b. 1884, as an RA Schools student from 25 July 1905 to July 1910.
https://bit.ly/2u3YTVF

The collection has no information, other than that it is signed on the left underside.

The practically intriguing detail of this item is that under the coat he appears to be wearing crossed 'bandoliers' - not military but perhaps the long should loops for a pair of capacious bags at each hip that might suggest a 'fauna or flora collector/explorer'.

I expect this is an early work by King, most probably before WWI, and almost certainly before 1920.

Marion, I suggest you pass this one to Royal Botanic Gardens, Kew, Natural History Museum etc and see if my 'shoulder bags/ collector' suggestion above disturbs anything lurking in the undergrowth....I agree with Jacinto its likely to be of someone (probably eminently intrepid and scholarly/ scientific in that line) somewhere around 1900 to WWI.

It could help to find out what pieces King exhibited at the Royal Academy between 1910 and 1920.

Here is a list of the pieces he exhibited at the RA Summer exhibitions. Its not helpful though, the only potential candidates (between 1910 & 1920) are Viscount Duncannon, M.P. and W. H. Romaine-Walker, both of them are not the sitter (see photos attached).

One should also check what portraits King exhibited at the Royal Society of Portrait Painters which occasionally accepted sculpture, the RSA in 1920, which included many works by him, and the Royal West of England Academy 1918-26
Edinburgh houses a significant Botanic Gardens
Does the lender have the names of any previous owners or a record of exhibitions in which it was shown?

In December 1928, King was elected an Associate of the Royal Society of British Sculptors and was, by 1939, a Fellow. He would later in life become the President of that society. Perhaps their records might also be worth consulting.

King was also a member of the Association of Sussex Artists.

Additionally, the bust of Duncannon, was, according to the Cheltenham On-Looker of the 17th September 1910, "done for the Countess of Bessborough, and is now in Ireland."

Is this list on the Glasgow Uni sculpture site of use? https://sculpture.gla.ac.uk/view/person.php?id=msib2_1222424830

Thanks, Andrew, though actually that link is in Marion's introduction to the discussion! I'm far from sure this is a portrait, at least in any formal sense. To me he looks more like a character type, though doubtless based on a real person (if only a model) - I'd expect it to have a title like 'The collector' (if Pieter's right). But one can imagine any number of other people who *might* have crossed straps like that (implying two bags)...a fly fisherman, perhaps, or photographer. Or at the other end of the social scale any labourer, rural or urban, who needs to keep stocks of two things separate for his work (or one for his lunch), like seeds or different sizes of nails. At a pinch he could even be a morris-man, though I think they normally have a boss or plaque where the straps cross. And I'm unsure why there's such a degree of certainty about a pre-1920s date - is that based on how King's style developed? The plinth, certainly, is later, though that may mean nothing.

Could 'The Preacher' of 1918 (?exhib), for example, have been an eccentric itinerant tub-thumper who carried bags of tracts and bibles? I'm not entirely serious, but I think such a semi-generic title might be worth looking for.

Many thanks, Andrea, for that excellent RA list. I was trying to do the same thing last night from the RA catalogue archive (https://bit.ly/344pkeB), but I find their search engines clunky and prescriptive, and abandoned the task.

I've asked whether the collection knows of any famous local characters that we might consider, as there might be painted portraits for comparison.

Marion, is there a photograph of the signature area of the sculpture available?

In general, it might be worth ArtUK insisting that collections always send images of any signatures, monograms or obviously-intended marks for posting on the website. That might save a great deal of researchers' time and guess-work and lead, more quickly, to useful conclusions.

....and one correction and apology. On closer scrutiny, It would appear that King was not a member of the Association of Sussex Artists by had accepted an invitation to exhibit at one of their shows in 1939.

If a photograph had been taken I would expect it to be among the 6 images on Art UK, so the answer in this case is probably not. I will ask the collection to take one if they can.

For what it's worth, the only other piece by King on Art UK, dated 1930, is very much in Art Deco mode:

Marion, would you be so kind as to post, if available, a hi-res section of the first photograph in the sequence, of the area where the crossed belt or "bandoliers" can be seen? It for for no other reason than to discern if there is a pattern or identifiable motifs cut into the metal.

What is rather odd is that the bag-straps (if that they be) are *underneath* the jacket/coat. As a fisherman myself who usually has a bag slung over one shoulder, and a landing-net on a lanyard over the other, this is unusual...unless, say, a Barbour that's been discarded because it's too hot, is needed again in a hurry when rain begins to fall. A bag or net or anything else hanging under your coat is a thorough nuisance to get at.

The man has an air of George V about him, meaning the bust may perhaps be 1920s or 1930s. For some reason he also looks vaguely Irish to me, but I may be imagining that.

Kieran, there is a high-res image of the clothing attached.

I know my Grandfather used models, frequently my Mother, my Aunt or my Grandmother for his works, though he was also well known for his portraits. So while I can't say whether this was a modelled work or a specific person, I would think it was someone specific because it's a 'close up'. He generally used models for his war memorials so my Mother appeared in some of the war memorials, though not as herself. I have this bust which I believe was exhibited at the Royal Academy. He was a prolific artist and many of his works were private commissions such as the clock with marble figures on the Shell building (near the river Thames) in London and very numerous portraits mostly in private collections. Hope that might be helpful...

Dear Mr. Davis, did your grandfather usually sign and date his works? If so, was it usually with a full signature, initials or a monogram? And was there a usual place on a cast that he would use?

Good morning Jonathan, Thank you very much for telling us about your grandfather's working practice, and for attaching images of his fine sculpture bust of a child. It is interesting that your mother modelled for some of the figures on his war memorials.

Pieter and Osmund both lean toward this being a character type (an enthusiast of sorts), although, picking up on Osmund's point, why might crossed straps (suggesting bags) be *underneath* a heavy coat? Could the straps be bandoliers after all, or has that been ruled out (aside from the obvious fact that ammunition slots aren't shown)?

My instinct is still that it's someone broadly scientific/exploratory, and civilian: if 'martial', even if in a guerrilla rather than formal military way (as in Dr L.S. Jameson of Jameson's Raid, 1895, in South Africa - who it certainly isn't), I think the bandoliers would have shown it more clearly -but it's still just a guess.

Perhaps Mr. Jonathan Holland Davis, or a member of his extended family, has some of his grandfather's papers, diaries or account books, which might throw some light on the matter.

It doesn't help us, except perhaps stylistically re dating, but I think this is the original clay (or a plaster cast of it) for Jonathan's delightful bust: https://bit.ly/33ZIQbn. Its title is 'Rosemary', and it was indeed exhibited at the R.A. Summer Exhibition, in 1938 (#1547 - see page 101 here: https://bit.ly/35Tmud7).

Re our work, I shouldn't give much weight to my straps observation. Though 'under the jacket' may not be the norm, one can imagine circumstances and/or idiosyncratic habits where it might be thus - and of course the artist may have just thought it looked better or was easier to model.

...or perhaps he's just a country gamekeeper/ beater with game-bags, encountered at a weekend shooting party and done for his fine appearance....

Perfectly possible, Pieter - certainly I don't believe it's a commissioned portrait in the normal sense. Johnson & Greutzner cover (often with errors and omissions) the period 1880-1940, and list 13 exhibits for him at Glasgow (Royal G Institute of FA), 20 at Liverpool (Walker), 46 at the RA, 2 at (oddly) the Royal Institute of Painters in Watercolours, and 5 at the RSA.

We have the complete list of 54 RA exhibits thanks to Andrea - nothing leaps out there. 'Mapping Sculpture' covers some of the others in part (though I often find their arrangement of info confusing): these include apparently all 5 of the RSA ones (1918-20), and 4 of those at Glasgow (1919-23)...plus 7 at the RWEA (1918-25) and one with the International Society at the Grosvenor Gallery (1919). Many of these seem to be the same works exhibited multiple times, and none of the titles looks possible (except conceivably 'The Preacher' at RWEA 1918).

The next step should be to look for the others at Glasgow (apparently 9 more), and the 20 at Liverpool. The former will be quite easy as there is the 1991 Dictionary of Exhibitors - does anyone have immediate access (if not, I can consult the NAL's copy, but probably not for two or three weeks)? For the time being the Liverpool Autumn exhibitions have to be consulted year by year - at least I think that's right...Martin? Again I could do it at the NAL, but not till early-mid Nov.

Finally the RBS (Royal Soc of British Sculptors, later Royal British Soc etc) has changed its name yet again - it's now the RSS ('British' excised completely, in accordance with current on-message sensibilities). They have, or used to, extensive photographic files of members' works (King was a past president, and a very active one). This was only begun in 1933, however, so may not help. They are in South Kensington, so again I could help in Nov.

And do the collection really have no information whatever on how / when / from whom they acquired it?

No relevant exhibits at the Royal Glasgow Institute exhibitions
And for the Liverpool show you need to go to the NAL, where the catalogues should be in better shape than for those before 1900 - unless contributors cam consult them more easily at the Walker Art Gallery's library - you would need to arrange an appointment to do that

Thanks, Martin - for me it will/would be the NAL, though I'm going away shortly and won't be able to get there for two weeks or so.

Andrea's list of RA works is not quite complete after all: her source, the chronicle250.com index, omits several years of exhibiting there by King. He also showed in 1917 (two bronze portrait busts, one of them of Philip de Laszlo), 1918 (a bronze statuette), 1925 (a marble portrait bust) and 1945 (another bronze statuette). Though none of them could be ours, it's a deficiency worth remembering for the future.

Title
Bust of a Male