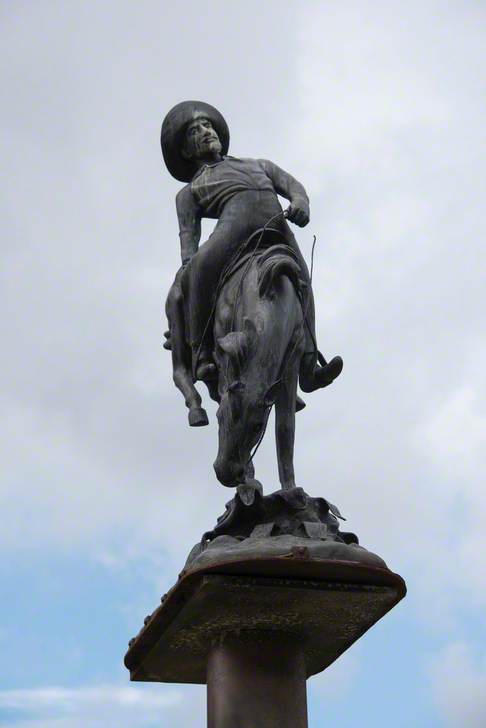 This bronze statue was commissioned by Regency Homes to mark their new development at Dennistoun, Glasgow, 115 years after Colonel William F. Cody, who was better known as Buffalo Bill, brought his Wild West Show to the area.

The statue was unveiled on 17 November 2006, so someone might recall the sculptor’s name. There are several accounts on the internet, but none of those found so far mention the artist.

Whatever entity paid the sculptor has to know who was paid, so the relevant company or organization, presumably Regency Homes, needs to be contacted for that information.

I'm afraid this is really just a copy of Frederic Remington's famous 1906 sculpture 'The Outlaw'. I suppose it's possible an identifiable sculptor may have been involved in tweaking the face to resemble Cody (who was not Remington's subject). But I have my doubts that it was "commissioned" in the sense that we mean it: the unhappy marriage of the sculpture's original base and the welded platform-on-a-pole suggests it might have been an off-the-shelf item - perhaps of far eastern manufacture - that was adapted for an unintended purpose and position. Some of it is not very good, notably the horse's head, mane and forelegs position; and the front of the trousers/chaps seems to have been completely misunderstood.

Remington has been copied and indeed faked for a hundred years, and there are countless versions and copies of this work, large and small, to be found on the web. They are of wildly differing quality and fidelity - they range from cheap shelf ornaments on eBay to original casts from the artist's lifetime. And though the original was less than two feet tall, larger versions of this sort of size (five feet) are widely available. See, for example: https://bit.ly/32U4D4e
I don't feel it warrants much time and effort, but a thorough internet search might dig up a type that more closely resembles this one.

For comparison I attach a composite of Glasgow's version alongside a fairly early 'approved' cast of the original.

That would explain why no sculptor was ever mentioned in the press, and knowing it's a copy (and altered at that) is as much as anyone needs to know about the matter. I, certainly, would go no further.

One should remember the very popular Lobby Dosser bronze of 1992 in Woodside, Glasgow based on drawings by the Scottish cartoonist Bud Neill [1911-70] representing Lobey Dosser and Rank Bajin, asride El Fideljo',' the only two legged horse in the West ' which may well have inspired this commission. Across the road from the Flatiron Bar. Funded by an appeal mounted by the Glasgow Herald and a small contribution from The Scottish Arts Council. it was executed by Tony Morrow and Nick Gillon to the design Ranald MacColl, after the idea was put forward by the Glasgow artist Callum Mackenzie and others. Callum and other artists frequented what was then the old fashioned The Halt Bar, 160 Woodlands Road
That sculpture was removed for restoration in 2006 after vandalism

If a more immediate name is found, the artist description probably still has to be '...after Frederic Remington', or that on its own if not.

The City Archivist staff in the Glasgow Room of the Mitchell Library should be able to help. Very helpful but probably quite busy this month with schools off and Glasgow full of visitors. They should know how to access the relevant Planning Permission(or equivalent)

Has anyone yet tried contacting Regency Homes, if they are still in existence? The standard of the work might indicate that it was done cheaply by an art school student. Art schools have long been approached for advice over minor commissions of this kind. There may be a record in the sculpture department of Glasgow School of Art of an approach from Regency Homes

The commission and unveiling of the statue was reported on BBC NEWS Scotland on 17 November 2006. The unveiling was performed by Paul Martin MSP for Springburn
Buffalo Bill and his troup had performed his Wild West Show in Dennistoun at the East End Exhibition Building off Duke Street from 16 November 1891 to 27 February 1892. There will surely be reports in the Glasgow Herald and other West of Scotland newspapers which might well name the artist[s].

Gerry Braiden is on twitter, which he joined in 2011

Paul Martin lost his seat in the Scottish Parliament in 2016, but may remember who were the sculptors

The name of the fioundry night well be on the base of the statue. A ladder could be used to look for this

Dr Ray McKenzie, author of Public Sculpture in Glasgow, 2001 , formerly a member of staff at Glasgow School of Art, may well know this work well - he can be contacted through the GSA and the Public Monuments and Sculpture Association.
He was the author of Public Sculpture of Edinburgh, Liverpool University Press, 2018 and lives not far from, Glasgow
PMSA www .pmsa.org.uk can be contacted at office@pmsa.org.uk
Its Chief Executive is Tanya Brittaiin
Timothy Llewellyn will know who else at PMSA should be contacted

The planning permission granted by Glasgow City Council for the site is 02/01118/DC | Erection of residential development, gymnasium, community facilities and associated works. | Site At Whitehill Street/ Finlay Drive Dennistoun Glasgow, unfortunately the detailed planning documents do not appear on the website, and the permission was granted to Riverview Homes Ltd, further complicating the trail, but an email to planningenquiry@glasgow.gov.uk might yield someone willing to search the documentation in person.

Russell and Bryce Architects are listed as agents for the planning application and still seem to be in business at Grovepark Street Glasgow but the internet has not yielded up other contact details.

The Scottish Arts Council] - [wound up in 2010] may have received an application for support funding for the sculpture. Probably this would have given the name[s] of the proposed artist[s]. Amanda Catto is head of visual arts of its successor, Creative Scotland] and may be able to provide information. She was formerly on the staff of The Scottish Arts Council as Director of Visual Arts.

Thank you all for these suggestions. I have emailed the PMSA and Glasgow City Council.

Martin, thank you for suggesting several people to contact in 2019. I had no replies from either the PMSA or Glasgow City Council. I've written to Amanda Catto at Creative Scotland.

Amanda Catto kindly made enquiries, but Creative Scotland is unable to help.

Would it be worth asking the Dennistoun Conservation Society if they may have any information?
Although they are more concerned with the designated conservation area of Dennistoun, they may also have knowledge about their locality in general.

Elin, Thanks for suggesting that we ask the Dennistoun Conservation Society. I'll do that.

Description
A figure of Buffalo Bill riding a bucking horse mounted atop a slender column.